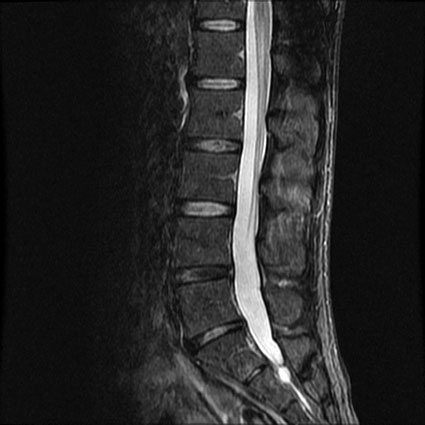 I've been contending with back pain for much of 2008, beginning with a severe cold last January that had me coughing and sneezing violently for about two weeks, which seemed to injure my back. Following that, I re-injured my back skiing about two months later. Throughout the year, my ability to rest and heal was limited, as I was constantly chasing my two-year-old.

This November, things took a turn for the worse, so I figured it was time to see a doctor. I was expecting to hear I'd strained some muscle and needed to do some exercises and rest a bit. Instead, I found out I've got a herniated disk.

The good news is that surgery is not likely to be necessary. The bulge is mild to moderate, and with a course of medication and PT, may shrink back into place over time, leaving me (ideally) good as new.I suppose I could think of this as a setback, but actually I think it's kind of an opportunity: I can write about my back, and my rehab, sharing information to create a real-time, online resource for those of you who struggle with your own low back pain.

Each week, I'll talk about medications and doctor visits. I'll write about the newest research on spine injuries, and I'll document my progress, step by step. I'll do regular blog posts on the specific exercises and stretches I'm supposed to be doing. In fact, I'll even create an image library showing photos of my PT exercises so you can try them at home, yourself. I know—I'll hire sexy models and photograph them wearing Danskin T-back leotards as they demonstrate the exercises!

Ah...who am I kidding? I'm pretty bummed about this. Stay tuned...

I hope you heal fast and well.

Thanks guys. I'm going to do my best to heal up and get back out there when the snow starts falling.

"Models in leotards", you say? Here, lemme get ya started ...

(Warning: These are mostly safe for work but, well, don't look too closely. *shudder*)

Urr... 'that help take the pain away?

I've had back pain since a big wiper on ElCap in 2002. Skiing, shoveling snow, climbing...having fun made it worse. I am amazingly flexiable, in great shape and shouldn't have to deal with constant mind numbing pain. After chiropractic work, yoga, somatics, a new bed, and the thousands of dollars that have gone with it I can say; try the TURBO SONIC whole body vibration machine works for me. I spent a week around one recently, ski touring everyday. I don't hurt right now, at all, first time in years. Before anyone cuts a whole in your skin to get at something on the inside I would really suggest trying that device.