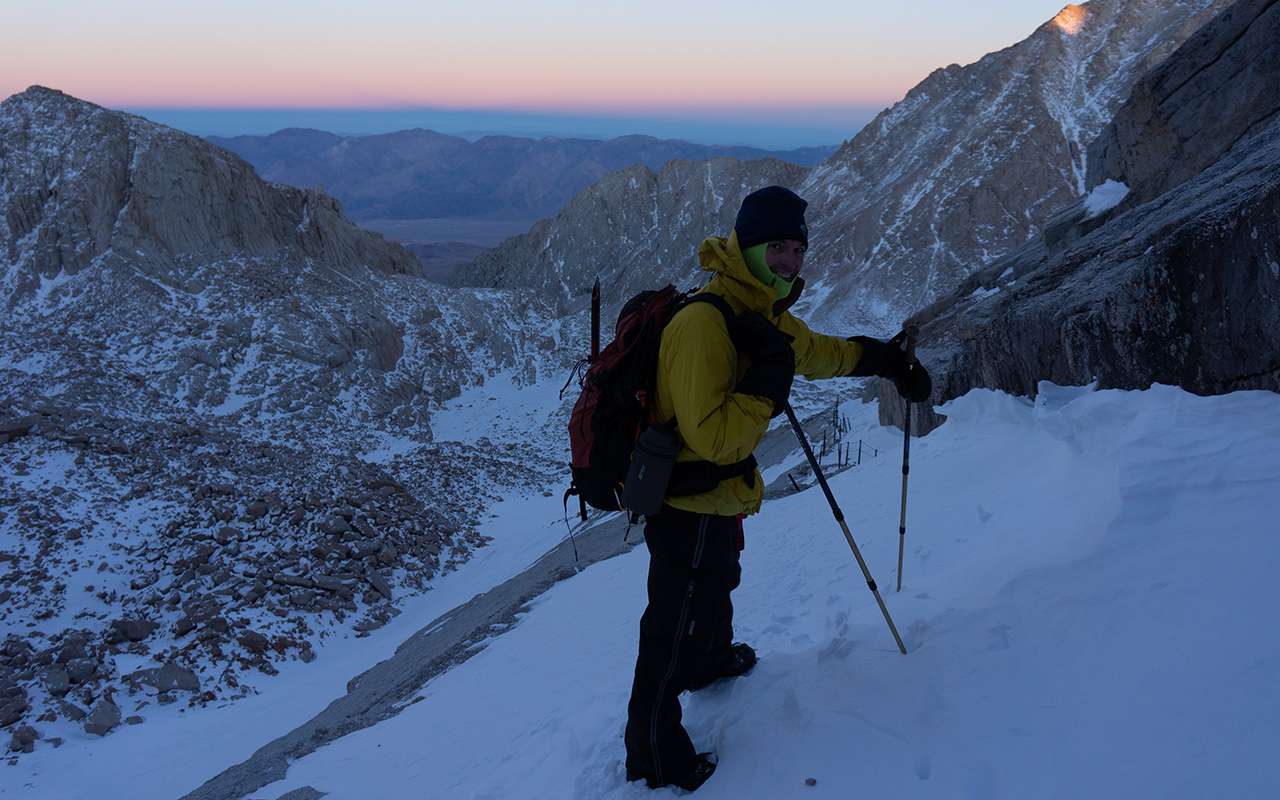 One of the things I pride myself on is belated insight—meaning, I do have good ideas, but they tend to occur to me a little bit late. That was definitely the case going up the Mount Whitney Trail last weekend. We knew we'd be facing weather somewhere between 0-20°F, and we knew we'd be climbing fast.

Staying comfortable—not too cold, not too hot, and absolutely not wet—was going to be a challenge. When you hop out of a warm car on a cold night, it's hard to resist the temptation to put on every piece of clothing you own. I tend to compromise, putting on layers I know I'm going to need to peel, but avoiding shells. Last Sunday, however, I did wear my shell pants, over a medium-weight underwear bottom. That's a very warm combination, but I was concerned about being too cold, and I figured I could cool down, if needed, by removing my top layers.

Trevor and I hit the trail, and soon enough I felt that hot sensation along my back that means it's time to start getting undressed. It was a bit warmer than expected, thanks to some kind of inversion happening over Owens Valley, so I kept pulling off top layers until I was hiking in just a long-sleeve shirt. And as I continued to hike I continued to warm up, and even sweat, and I began thinking about that, and it occurred to me that I'd gotten my clothing exactly backwards.

Think about it: when you're climbing, what's generating all that heat? How about the largest muscle group in your body, working hard to carry your weight up the hill? And instead of having my legs uncovered, so they could freely radiate heat out into the atmosphere, I had them covered, and insulated, so that my body's vascular system was being forced to route that heat into the core of my body and then radiate it out via my head and my torso.

Obviously, that's an inefficient way to do it. But the greater concern, I realized, was something else. It was freezing cold, and I was dressed in just a shirt. Every blood vessel in my body was dilated. My chest and head were getting damp. My upper body was dumping heat as fast as it possibly could. If anything changed, I realized—if it got colder, or windy, or if I had to stop—I was in the worst possible position to adapt. I had perfectly set myself up for hypothermia.

And so I stopped and peeled off my shell pants. Immediately, I felt relief as heat streamed out from my thighs. Almost instantly, I also felt cold! Stopping just long enough to take off my shoes and pants and then re-lace my boots was enough to let my core temperature drop alarmingly. But this time, I put layers on up top, letting my core rebalance, letting my legs do the work of radiating off the extra heat. Gradually, I felt my chest and head dry out, and I was soon vastly more comfortable, not feeling nearly as vulnerable.

The lesson: keep your legs (and all exposed skin) covered when climbing hard in bitter cold, but keep the insulation as light and as breathable as possible down low (this may mean bringing gaiters). Prioritize layering extra insulation up top first. If you have to stop and your legs get cold, that's okay. It's not okay if your core gets cold. As things get colder, and especially if wind kicks up, you'll eventually need to go with a hard shell from head to toe, but even then, think of your body in halves, and always work to cover up top first and let your lower half be your radiator...

Good insight Andy. I go really light on my pants layers (wondering if its going to get me into trouble some day) because I would rather be a little cool that hot. I don't like to waste the energy and lose the water sweating. Well thought out in the article.