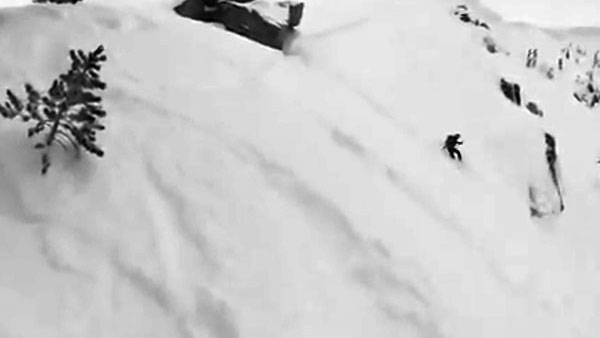 By now you've likely seen this video of an avalanche that trapped one skier on Echo Peak in the Tahoe Sierra on December 30, 2012. This is exactly the kind of video that tends to polarize opinions—the party members display a startling lack of familiarity with their avalanche gear (gear in general seems to prove endlessly problematic), and almost no knowledge of avalanche rescue protocols.

In short, if while watching this you found yourself shouting, "Take a Level One class!" at your screen, you're not alone. I had the same initial reaction myself. But, as I continued watching the video, and the primary rescuer continued to battle his gloves, the cold, wet hands, and a handle-less shovel blade, and as those awful seconds and minutes continued to drag on, one thought began to dominate all others in my mind: this is what real life looks like.

Kudos to all the involved skiers for making this public. The video will no doubt become a regular part of avalanche education classes and discussions across the country. But let's not get the lesson wrong! This is not a Keystone Cops routine. It's a story about all of us tiny little humans, and the raw, unconstrained, merciless chaos we can and should expect in the event that we ever find ourselves confronting not a training exercise but rather The Real Thing.

All of us have fantasies of how we'd react in the event of an emergency. I don't know about you, but in mine, my reactions to an avalanche, or a masked gunman in a mall, or a child running into a busy street, my reactions are pretty damn heroic. I save the day. The problem is, that's just fantasy. Real life is much, much messier.

That's not an argument against preparing, or training, or acquiring expertise. It is rather a reminder that, when the bomb drops, we are all pretty much going to find ourselves in the very same situation you see in the Echo Peak video: terrified, confused, trying to control what is not only uncontrollable, but what was only moments ago utterly beyond our ability to imagine.

I can't remember where I first saw this video but I ended up turning it off in disgust once he exposed the victims face.
I'd say that everybody should be able to access their beacon w/in 5 seconds or so. Precisely why I've use a custom harness and that enables me to yank my beacon out from the pouch from the small wrist strap and get goin.

Very good call. After seeing this the first time I strapped my beacon on under a jacket and walked around for the day practicing taking it out and turning it to search mode. I need to practice getting my shovel out of my pack as well, and hole digging. Especially after not doing any BC last season, it's so easy to let the skills get rusty.

None of us truly know how we will respond to emergencies until we actually face one. I would like to think that I would be rational, cool, make all the right decisions, etc. However, when you're faced with those seconds that tick by like minutes and everything is pumping, who knows how you'll really respond.

You will react the way you were trained.
Of course, if you weren't trained at all, then you won't react.
Which is what we see. Fumbling, "uhhhh", panic, etc.
Part of training should be obtaining faith that you will react the way you trained. So that you do.
Pilots, musicians, dancers, military, police, athletes all train for this reason. 'Do it till you don't have to think about it.'

I used to lead challenge (ropes) courses. We trained for "what if's" a lot., client gets inverted and belayer unable to lower to ground, etc, etc. -what do you do (besides panic). Your never perfect, hindsite being 20/20 but prep is key. You BC skiers in this forum give comfort by your good examples. These guys got the "line" but dropped into a high risk zone instead of shallower non funnel slopes begging to release-never mind the prep issue. Great training film-thanks for bringing it up 'cause even in bounds avies happen and hope is not a plan