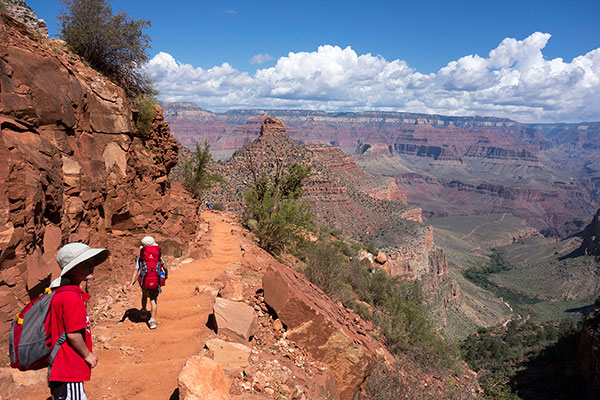 We made it out! I don't think I've ever been as anxious about a backpacking trip as this one, but when my brother invited me to join him on a 2-night trip with his family to Indian Garden, there was a lot of history to live up to. I've long thought that 1978 hike to Grand Canyon's Cottonwood Camp was one of the most formative backcountry experiences of my life.

So how could I resist the chance to reprise it with my own son? Well, for starters this has been a summer of spine problems for me, and even days out from the start of the hike, I was far from sure I could carry an overnight load for myself, much less for the both of us. And then there was the hike itself: with kids every new experience has the wonderful but also tragic ability to break either way.

Sometimes you get lucky, and you spark a new passion; sometimes a tiny quirk of fate accomplishes exactly the opposite. So I put a lot of pressure on myself to make the hike a success. Despite the bad back, I carried a ton of food. I brought a pillow. I brought my full collection of headlamps, compasses, and thermometers, and hid them in cool little bags inside my son's pack to surprise him.

And I crossed my fingers that Arizona's record-setting monsoon would finally give up the ghost before we got there. As you might guess, doing an overnight trip with a six year old was a lot of work, but my back held together, the rains stopped just in the nick of time, and everything else went smoothly. Our hike turned out to be exactly the passing-along of the torch that I had hoped for—or maybe I should say, the lighting of the spark...

Yep, who knew. Just back from Cottonwood Lakes with my son ( a scant 25 years older than yours). Cold, wind, AMS (wer'e fit, just broke most acclimitation rules) no Langley summit, and early exit. The easy trips are your reward for fatherhood done well, the hard ones build character. I've had both and my son's now has lifetime passion for outdoor stuff and the character to be an excellent dad to his son. BTW slept below your peak 12891. That's one heck of a day trip, you did a lap around our camp and I bailed.. Could you give us mere mortals a hint (new post maybe, please!?) on how you can do these monster trips. In 77 I did a weekend Whitney summit on a regimen of 5-7 miles running a day with no significant AMS so age is, of course, a factor. But my son, college athelete, was almost as bad as I was. Last summer we summited Baldy in 2.5 hours. I know it's your day job but yikes, how'd y do it?

Well thanks for the vote of confidence! :) Are you interested specifically in AMS strategies, or more generally just how I approach long, tough hikes (or both)?

Well both really. Found out a bit on the Whitney Zone but I figure you want to be successful at something follow a successful guy. I figure we had hit about 4 out of 10 on prep. Conditioning was sound, included local 4-5 mile am hikes under full load several times + local steep hikes with and without loads. They used to say train LSD ( long slow distance) but we never went over 2 hours and never at altitude. Seems the rapid altitude change is the biggest problem. We were well hydrated though maybe low on electrolytes and calories. Anyways just I interested in how you do it behind the scenes, unless a trade secret though I suspect it's like anything else, lots of time at the craft. Anyways I might not be the only one I interested and considering your Olancha trip it might be fresh on your mind as well. Thanks for your interest.

I don't see my reply from yesterday? Anyways yes both, thanks.

One more thought, you speak of benchmarks. I read that Coombs recommended being able to run 6 miles as a prerequisite to a heli trip. What benchmarks do you have that let you know your ready? I would have thought your San Gorgonia lap would be sufficient prep for Olancha, after all it's only (only?) 5 miles and 1200' (?) more?