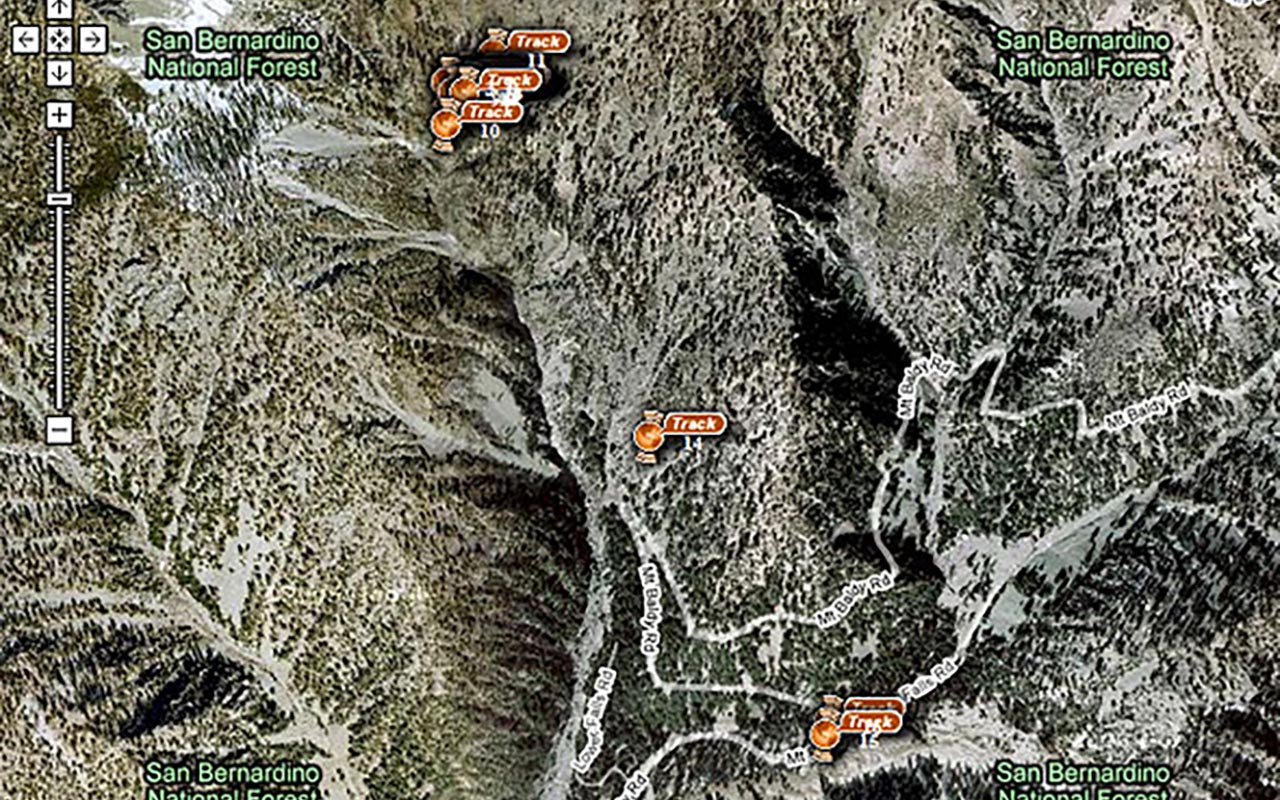 Truly tragic news here: on Saturday I lost my Spot tracker while testing the device in the San Gabriel mountains. I've been continuing to try out the unit's 'track' function, which automatically sends a satellite ping every 10 minutes with your current location & time.

Unfortunately, to get the track function to work, you have to keep the unit in a position where it has a continuous good view of the sky. To do this, you can clip it to your belt—though the clip doesn't look very secure (there is no loop for a more secure attachment). I was worried the thing would fall off my belt if I tried clipping it on, and that's exactly what happened.

Funny thing is, since the Spot was in Tracking Mode, it continued sending out pings giving out its location—and did so for 24 hours, until the Tracking function timed out. I wasn't able to go back and find it because I don't have a GPS, but I figure I know its location to within a 30-60 foot radius or so, probably giving me decent odds of finding the thing. Unfortunately, this week's storms are all but certain to bury my Spot. So, I guess I'll go looking for it once summer rolls around.

Interestingly, if you look at the spread of the tracking pings (the large cluster), you'll notice they are grouped fairly loosely. I would guess you're looking at a search field somewhere in the neighborhood of 100 x 80 yards—not exactly stellar accuracy.

More on that in a moment. First, since we have a nice 10-15 pings making up the cluster, we can reasonably assume that the actual Spot position is somewhere toward the center of the field, hence my earlier estimate that I know the location within 60 feet or less. That's still hardly ideal: given the ruggedness of the terrain, the likelihood of finding the lost Spot with this information and a hand held GPS is still probably fairly dicey.

So why so much error in the position pings? Potentially, the Spot fell in such a position that it does not have an unobstructed satellite view. So, as the Earth rotates, different sats come into view, each giving a slightly different position. At least, that's my theory. In any case, the signal sensitivity and accuracy of the Spot are revealing themselves in the field to be fairly coarse compared to the best GPS units.

Also noteworthy is the relative lack of pings. Recall that the Spot is supposed to be sending one ping every 10 minutes for 24 hours. We've got a total of 15 or so. What happened to all those other pings?

Assuming Spot is legitimately trying to send a Ping every ten minutes, obviously it's taking a great deal of time for the unit to be successful—nearly one hour per ping. Once again, the Spot is struggling in the field to send out messages with a partially-obstructed view (for example, during the first two hours of my hike, when I was in the sparse forest along the Ski Hut trail.

All of this suggests that the tracking function is of limited utility. Without it, of course, we'd have no pings at all to try and guess its location. But clearly, if you want to automatically send someone your position every ten minutes, the Spot tracking option is at best 'spotty'.

You know, you could have made this post a lot shorter if you'd just said, "Hey everyone, first person to the location on this map gets a free Spot Locator!" *dooh*