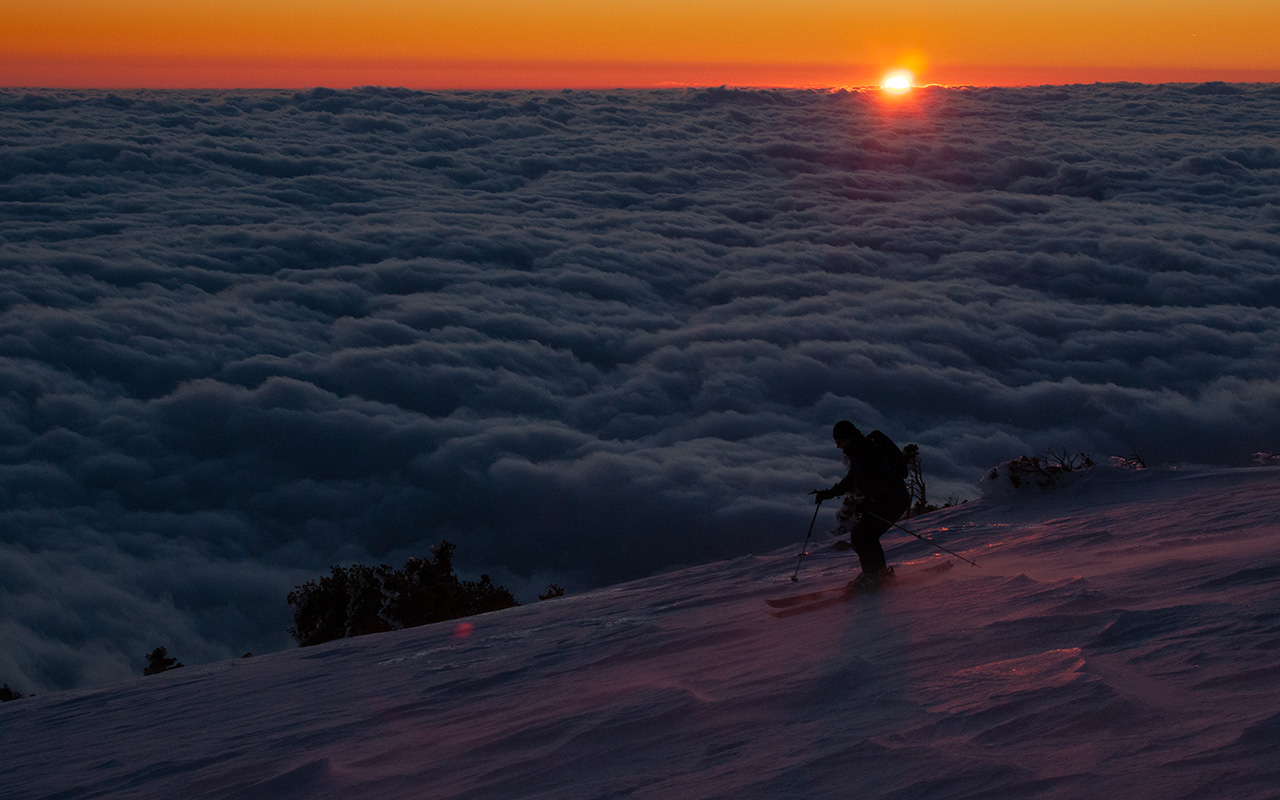 I had big plans this weekend, and they ended as Big Plans often do—by delivering me a big smackdown. Friday I and partner Bill climbed to the summit of West Baldy, camped nearby, and attempted to traverse the ridge down to Iron Mountain, with plans to ski a line on the Peak's opposite face before climbing back to Baldy.

In Summer, the San Antonio Ridge is somewhat infamous as a SoCal gruel, with lots of up-and-down, class 3 climbing, and rugged terrain. We found it partially covered with bulletproof snow, making for exposed, icy travel at a snail's pace.

With weather deteriorating on Saturday, we decided to call off the attempt. Just getting to Iron Mountain via the ridge would have pushed the limits of our endurance and time frame—essentially, we were looking at 3.5 miles of technical ridge traversing just to get to the start of our project. And this after a tiring climb up Baldy the day before.

Sometimes, your plans just turn out to be not feasible. That was certainly the case here, sending me back to the drawing board on this one. Still, the trip was filled with memorable moments. Snow Camping at 9800' on West Baldy was bitterly cold, with 50-60 mph winds the entire time. This proved an ample test of our camping techniques and gear.

Suffice to say, the experience was highly educational.

I'll have to put together a writeup of the trip, which included a spectacular sunset-descent of West Baldy on Friday night. Dropping down over the fog-filled Los Angeles Basin as the sky turned red was unforgettable—easily the highlight of the trip. Things don't always go as planned, but with a little flexibility, even a busted trip can still turn out to be a gem.

Great photo. Was up AT'ing Baldy on Friday too. Watching the clouds roll in and sit on the mountains was incredible. Great backdrop for a great day.

I too thought a ski traverse to Iron mountain would be a good trip and I attempted it a few years ago. I skied down to the ridge and found it so wind sculpted that traveling on skis was probably as fast as post holing. Since I was not having a good time I decided to ski back up to West Baldy set camp and skied the perfect corn on its south slopes.

Thanks for your efforts!!