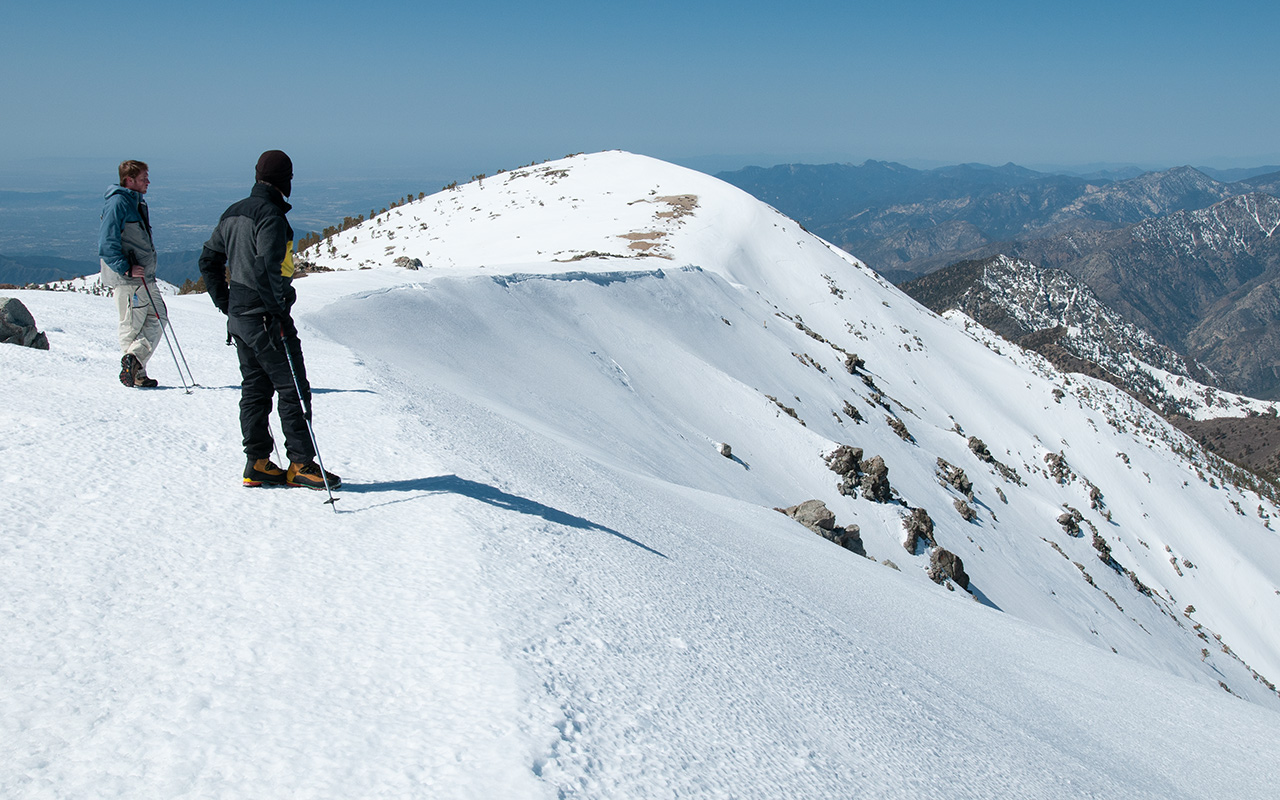 After scouting Mount Baldy's north face from Mount Waterman last week, I thought I'd hike up for a ski attempt this weekend. There was no question there would be snow—lots of it. But I was a little concerned about ice.

This has been a strange season for north aspects in the San Gabriels. Things have been persistently icy, even when temps get warm enough that you'd swear things should soften up.

To get a nice 2000' vertical boost, I decided to access the mountain from Mt. Baldy Ski Area's helpful chairlifts. After all, whatever you ski on Mount San Antonio's north face, you'll soon be climbing. What goes down here must go back up—at least, unless you want your relatives calling S&R.

Via the mostly-dry backbone trail, I made great time to Baldy's summit, arriving around 11 a.m. My plan was to 'feel out' the north face, hopefully finding good conditions, or else give the west face a look.

The snow was hard, smooth, and streaked with sheeny spots that clearly looked like trouble. I dropped a few vertical yards from the summit, and began traversing across the north face on a relatively lower angle pitch, bouncing on my edges, trying to see if the snow was soft enough for safe skiing.

My verdict: I didn't like it. I kept traversing, hoping the snow would soften as the aspect shifted to more easterly. That didn't happen, either. So, beneath the summit of West Baldy, I found a ridge where my boots would punch through, and I just pulled off my skis and hiked back up.

Even this proved a little sketchy for comfort.

Atop the West Summit, I envied the attractive north chutes here (which to my eye are among the best lines on the mountain). A broad and more-moderate ridge caught my eye. Surely, I thought, this sunny northeast slope must be a least a little teeny-tiny bit softer? So I dropped in. Nope. Once again, the snow was too hard for comfort. Skiable on alpine gear, maybe, but nothing I wanted to mess with on my A/T boards and megarides.

So, once again, I popped off the skis and climbed back up. This climb, if anything, proved even less fun than before, with the snow hardening in places enough to require me to kick steps with my toes and belay myself with my ski tails. No fun at all. So, I kept working westward, rounded West Baldy, and peeked over the edge of the west face.

Have you ever looked down Baldy's west face? The terrain is crazy: it drops super-steep into a narrow, plunging gorge that actually vanishes from view, as if it's going to take you straight down to hell. I'd sure love to ski it. Today, however, that west-facing snow is polished ice, even worse than the north face, except for the large patches of bare talus. This is one big fat non-starter. So, now what?

I decide to keep traversing, wrapping now south around West Baldy, then eastward around the main summit of Baldy, thus completing an official if miniature circumnavigation of the mountain. Please enter my name in the SoCal ski mountaineering annals of achievement. :)

After all that, I finally skied the most reliable pitch in Baldy's Southeast bowl—the snowpatch that sits just south of the east summit ridge. The snow here at last was delightfully soft corn, making for a nice quick thousand feet of vertical that at least qualified as bona-fide skiing. Afterward, just to round out the day, I had a nasty scramble back up about two hundred feet of bare talus to regain the Backbone Trail, but that was just par for the course.

Some thoughts: what is up with the snow on the San Gabriel Mountains' north aspects this year? It just refuses to soften. I'm looking over some old photo albums of years past, and I see I've skied these exact lines at this exact same time of year, and found mush everywhere after 10 a.m. This year, as I say, it's completely different. Just positively damn near unskiable if you value life and limb.

I'll probably rerun this little venture again in two or three or four weeks or so (hopefully during a heat wave), to see if things eventually do soften enough to be safe. I must confess I'm beginning to suspect the snow will never soften. It will just sublimate away, going straight from ice to bare rock.

Please do take the ice threat seriously on Baldy's north face. Under present conditions (or god forbid, cold, shady, windy weather) this is absolutely a no-fall zone for skiers and climbers alike.

Baldy's south bowl remains skiable above the ski hut, and Saturday I saw the usual contingent of hikers, plus quite a few skiers making the trek up from Manker Flat. The chutes off the ridgeline look too burnt to recommend, but the east pitch I mentioned remains in good shape. This will probably hold for another two weeks or so, assuming things stay warm and dry.

"Some thoughts: what is up with the snow on the San Gabriel Mountains’ north aspects this year? It just refuses to soften. I’m looking over some old photo albums of years past, and I see I’ve skied these exact lines at this exact same time of year, and found mush everywhere after 10 a.m."

I think this might be from the freezing rain we got, icing up the upper inches enough that it has yet to soften, just melt to water that evaporates. Sounds like the San B's. are very icy also. Hopefully things will soften soon and not just all evaporate away.

What is the pitch (degrees) on the section skied in the above article. Similar to the dropout and wipeout chutes, chair 22 chutes or steeper. If you had to walk out after your descent where would you end up and how long would it take given favorable weather conditions?

Hey Bud, it's been years, but I'm going to guess average pitch across the face is in the 40-44° range, which is steep enough that you don't want to be anywhere near it when it's ice.

As for exit, go east and you have a chance of making Stockton flats after lots of difficult ground. Go west, and you've got no chance at all--you're facing the narrows of the east fork of San Gabriel Canyon. Go north, and you might make highway 2. That's a hike I've been wanting to try to see if it can be done. Short answer: don't try to hike out! :)

I googled "hiking from Wrightwood to Mt. Baldy. One of the articles said that it is done. Baldy shares a ridgeline with Dawson Pk, Pine Mt. and Wright Mtn? Trail head is off 2 north of Wrightwood.

Any other adventures on Waterman or Baldy. My interest stems from skiing Waterman as early as 1959 and then Baldy the last few years they had any snow.

Devil' Canyon and the Avalanche Runa at Waterman were always good for a few stories.