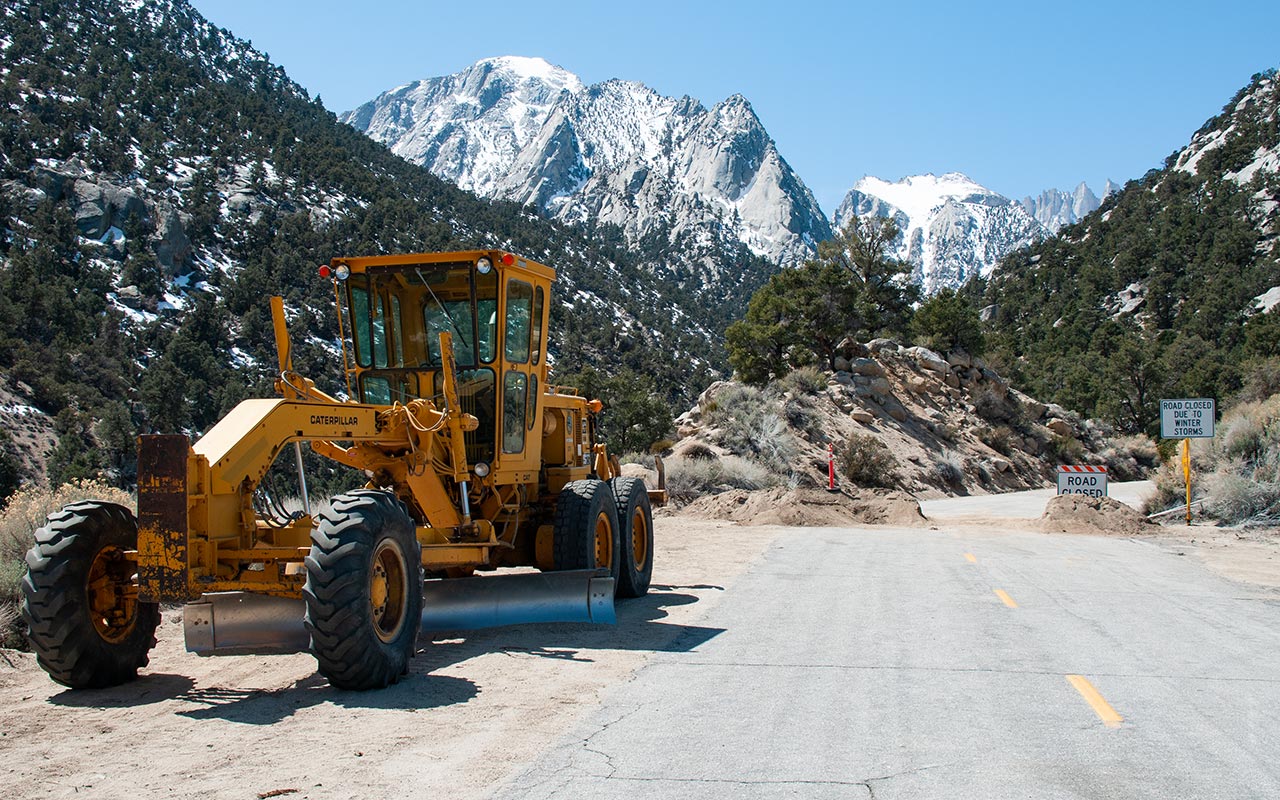 Well, I drove up to Lone Pine yesterday with big plans for some climbing and skiing in the Whitney Portal region, only to discover the road, which is normally "closed" for winter had been Closed.

Seems the issue is the powers that be have decided to open Whitney Portal Road (earlier and earlier each year, isn't it?), so they graded a sand berm across the road to Close it while they're opening it (ie, clearing boulders and snow). It all makes sense, I suppose, though I wish they hadn't decided to Open the road (aka Close it) on the weekend I happened to be driving up.

The Visitor's Center says they expect the road to be open as early as Monday of next week, so the open-closed ambiguity will be resolved for good soon, at least until next winter.

For the record: Whitney Portal Road is closed during the winter, though it is a fuzzy closure in the sense that the road is not usually gated or otherwise physically blocked.

My guess would be that CalTrans or whoever maintains the road and the National Forest Service don't want to be liable for winter maintenance, or accidents, hence the closure policy, but at the same time they recognize that people want and expect vehicle access to the portal year-round, including winter. If you do observe the closure point, you are adding a withering 2000 vertical feet and three miles, one-way, to your Whitney approach, which is easily enough to ruin your plans.

Does this mean you're hiking Williamson with me this year...X-Man?

Just walked in the door from a weekend snowboarding trip to Mammoth / June.

The snow was really great on top of Mammoth on Friday. Really nasty winds were blowing most of the weekend, which turned some places into heaven, some much closer to hell, at least for us knuckle draggers! The routes off the back to 13 and 14 were pretty bulletproof even with the sun baking it most of the day.

Anything facing North or East was another story! Hangman's and Baby Hangman's / Dave's/ Parts of Huveos were in surprisingly good shape given the last few weeks of sun. Gravy Chutes were filled in beautifully - even jump rock had a soft landing from all the windblown! Face of 5, Upper Dry Creek were feeling more like mid winter than April!

June Mountain was fun on Saturday. Felt a lot more like April up there. The face runs / J-7 chair were a little crispy with the wind early on, but softened up really nicely as the day went on. Things were very fun around 11am.

I talked with a few spilt board / telemark crews heading off the top to the Negatives. I could only watch with envy as I was on a trip with work folks. Carson, Wood, and Gibbs all looked incredible on Saturday, but again, there was the wind on the top. You could see the the ridges being blown around quite a bit off and on throughout the day.

I rose early this morning hoping to make a go at Bloody after talking with some old friends at Wave Rave who had done it a few days before, but the wind was back, and had increased quite a bit from Saturday, and going solo didn't seem like the best idea as the white caps increased in size on Convict throughout the morning.

So, I spent today (Sunday) combing the popular approach roads / off-road trails in the Eastern Sierra.
After being inspired to do so from your post on 3.29.

I too was curious how far you could drive up Whitney Portal Road.

After going to Convict I headed south and had a look at Rock Creek Road - all the way to the point of closure at Sno Park. The road is in great shape, and all the snow is clear. Lots of X-Country folks milling around.

Did some future house hunting (ah hum- dreaming) in the Swall Meadows area, and had a good look at Mt. Tom. Things were looking a little better there (wind wise) and I found a few off road trails that led me almost to the base of Tom / Elderberry Canyon? It was hard to tell exactly where they led to but I believe I was there, because I eventually found my way back to Pine Creek Road by heading south of where I had started out above in Swall Meadows.

Around 4 p.m. I made my way up the point of closure in question around 6K on Whitney Portal Road. I also saw the dirt berm they had set in place with the sign...

As I was contemplating my next move, a Lone Pine local in a lifted Jeep was returning down from the Portal and said that he had made it as far as the ponds? But had to winch out a few times and that that snow was pretty nasty beyond that. I made it to the snow level and the recreation area - campground parking lot without having to shift into 4 wheel drive once. I found that the remaining bit of road looked pretty nasty and decided not to explore much further.

I'll have some shots up of today's drive up on fjcruiserforums.com very soon. I'll keep you posted when they go up.
Have fun up there!

hi, does anyone know exact mileage from say the stoplight in town to the closure point?
thanks,
lisa

Lisa, the road is open now...distance to the closure point (first switchback) is 8.4 miles from the stoplight in Lone Pine.