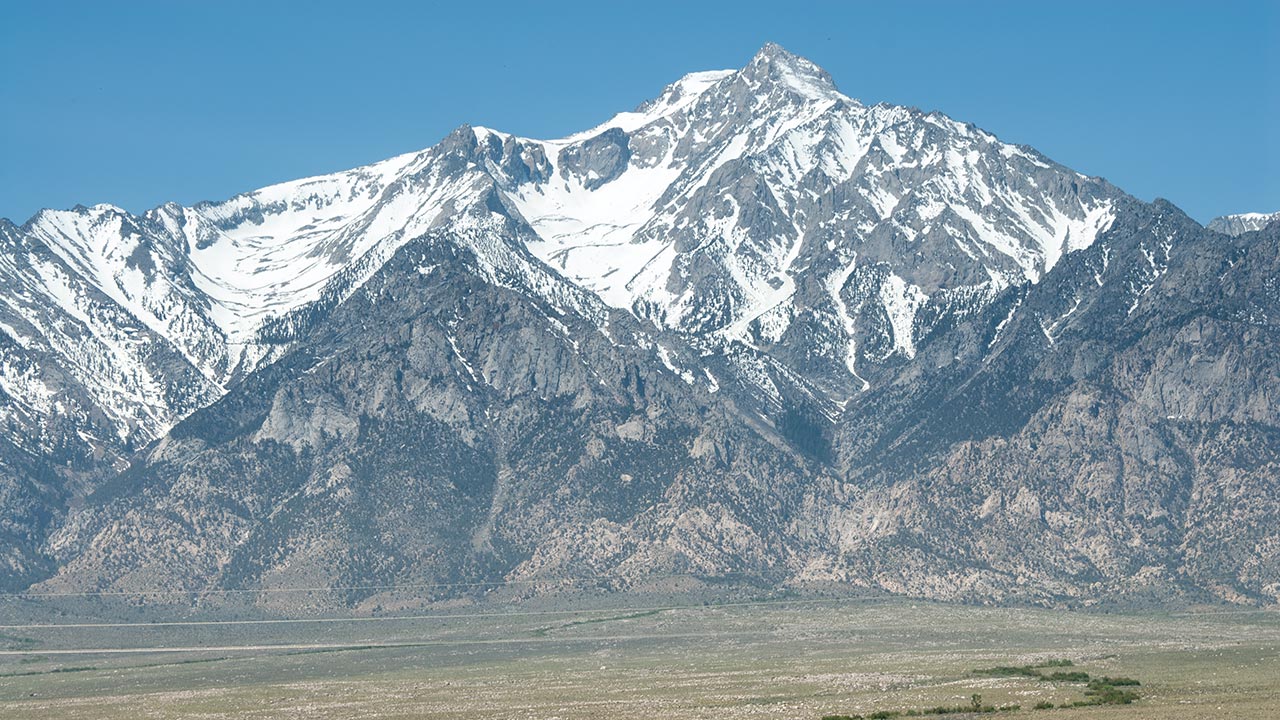 Today's Notes from the Field come courtesy of my friend Bill, whose adventures on Mount Williamson served as an early inspiration to me on my own quest to ski California's second-highest peak. Bill has a thing for the George Creek approach, which appears here and there in the guidebooks, usually with a sly 'recommendation' ala ...for an extra-special adventure, don't miss this unforgettable Sierra bushwhacking classic...

My own fascination with Williamson probably began the moment I first saw the beast.

But how could you not become obsessed with this massive, merciless mountain?

Williamson shrugged off my first attempt to ski it with an effortless indifference that was quite different from the usual, friendly Sierra 'hello' I'd grown accustomed to.

Not long after that failed effort, still licking my wounds, I chanced upon a TGR report of Bill's first George Creek attempt.

It was comforting, reading about the carnage, to hear that there were people at least as crazy as I was floating around the Eastern Sierra. It was also comforting to learn that others had tried to ski Williamson and (like me) barely managed to reach the snowline before being swatted away like a bug.

With that preamble, allow me to relay a message from Bill regarding his latest attempt to ski Mount Williamson via George Creek:

I had a little experience this weekend I thought I'd share with you. I decided to head up to Trojan Peak and the South Side of Williamson via George Creek. Trojan Peak looked perfect. The South face was a beautiful ramp of snow. I also knew that my line on Williamson was filled in from a photo I saw on Splitboard.com I also figured, that if anything, the North Face of Trojan holds three or four perfect couloirs for the taking. Left home early Sunday morning - 5:30 AM. This being my second time up George Creek I knew what to expect. Yeah - it's as bad as you remember. But knowing where to go this time made it a bit easier. Also, this time I wore hiking boots with my ski-boots clamped into the bindings on my pack. A little extra weight, but it made walking easier. I figured just take it easy, no rushing. The first 2 miles would take about 3-4 hours.....so I was all mentally prepared. I felt strong; in good spirits, making good time. What I didn't expect was snagging the tails of my skis as I tried to cross the creek. I had taken my boots off so they wouldn't get wet. As I stepped into the creek, my tails snagged the bank causing me to loose my balance and fall forward. Not wanting to land face first in the water with a 60lb pack on my back I tried to spin. I was almost successful. My whole body made it around except for my lower right leg and foot. The result was I got wet, killed the camera, and hurt something; most likely sprained ankle. I sat for about an hour assessing things. I was wondering if I was going to have to use my SPOT Messenger for 911. The pain wasn't too bad. I figured I'd try to walk it off. About an hour later it was apparent that the reason why the pain wasn't too bad was because my foot had been submerged long enough in the icy water to numb it. As the foot warmed up the pain increased. I figured if the pain wasn't that bad, it was a minor sprain and jamming it into my ski boot next morning would actually give it some bracing. But now, as I tried to friction walk up a slab, I got the message that this was probably not going to work. By now my ankle was getting weak, and my knee was starting to hurt. I figured I'd better look to see what the damage was. When I took my sock off, my toe was black and purple and swelling. My ankle was the size of a baseball. I tried to mimic a skiing motion. NOT good. I decided it was best to let George creek win again. Four and half hours later of bushwhacking, I hobbled to the truck. I could barely walk by then. I pulled the bag out and slept in the bed of the truck for a couple of hours and then drove home. I'm off to get x-rays now. I think my big toe is broken at the joint, my ankle is a high-lateral sprain at least, and my knee is just slightly sprained. The ankle is the size of grapefruit this morning. Oh, and of course I have the George Creek Brand - more scratches that I care to count on my arms and legs. F*cking George Creek. I'll be back next year --Bill

Wow ... sounds like Williamson deserves the right to be #2 in CA and #6 in the lower 48. I'm inspired (for some incomprehensible reason) to attempt the Bairs Creek Cirque route. I should start flogging myself every night just to get ready for the pain. What's the best time of year to attempt this?

There is some debate about that question. First of all, Mt. Williamson lies within the California Zoological Bighorn Sheep preserve. As such large portions of the mountain are subject to closure. Check with the Inyo National Forest website for the most current info. I think (I'm not sure) the Bairs Creek approach is open from Feb through early May.

Because of the low start and hostile drainage, it may be best to go early in the year. But this exposes you to the possibility, at least, of massive avalanches from a variety of directions. If you wait for the spring snowpack to stabilize (as I did), the climb becomes harder, as the snowline gets up around 9000'.

Any way you look at it, climbing and skiing Williamson is a big challenge--but also a highly rewarding one!