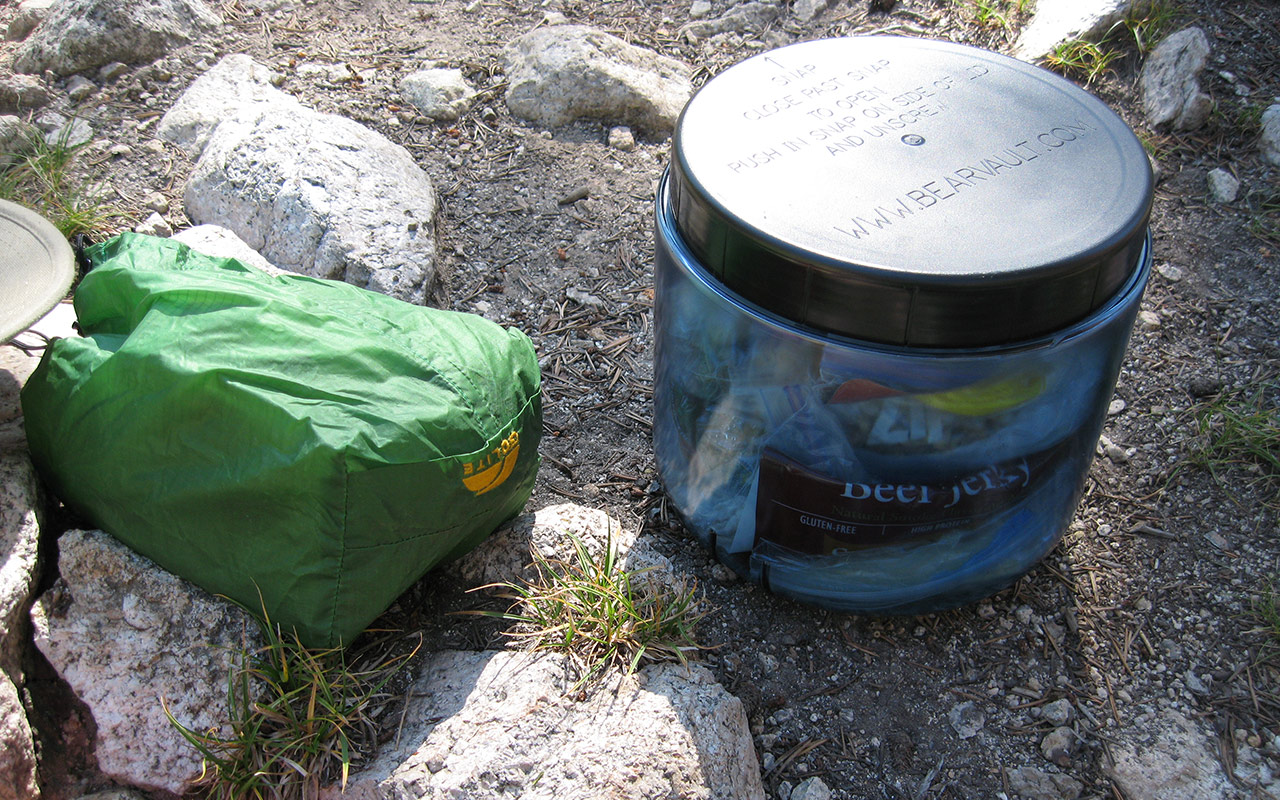 Late season storms aside, I've been looking forward to ditching the ski gear and switching to hiking and climbing. After all, summer camping in the Sierra is easier in almost every respect than winter. There is one big difference, however: in summer, we share the mountains with bears.

I must say I harbor no special ill will toward bears, but as a hiker I find they present an added layer of complexity that I would be happy to do without.

Talk to your friendly forest ranger about bears, and you'll come away all but convinced bears possess magical powers. That may be an exaggeration, but bears can present a significant threat to both you and your food. With a few simple strategies, however, you can greatly reduce the chances of an unwanted encounter.

1. Do Not Resemble Food

Bears of the California variety can be best understood as big, hungry vegetarians engaged in a night-and-day search for calorie-rich food. Why, exactly, our bears have chosen to forgo meat (as opposed to their Alaskan cousins) is a mystery, but one we humans should be very thankful about. That said, if you make yourself look or smell enough like food, even California bears may get confused—and this is a situation to be avoided.

Our first goal, then, should be to not resemble food. Before you leave for the wilderness, take a time out from your usual regimen of deliciously-scented personal care products. It's hard for me to leave my beloved honey-flavored Burt's Bees lip balm at home, but this along with your jasmine soap and all your perfume/cologne have no place in the backcountry. Believe it or not, you actually want to smell like a human—that is, like humans used to smell before we became civilized and doused ourselves daily in dainty-smelling elixirs.

This may also be a good time to acquire more hygienic eating habits. Avoid rubbing food oils all over your clothes and skin while eating. Avoid dusting yourself with food crumbs. Avoid bringing especially scented food into the backcountry in the first place. And eat well away from where you plan to sleep. In short: make yourself smell like you, not your cosmetic products and food.

You don't hear a lot of talk about this, probably because we've all heard about how incredibly powerful a bear's sense of smell is, but I believe it is in your best interest to hide the scent of your food as much as possible. Store food in zip-lock bags inside waterproof silnylon bags (more on safe food storage in a moment).

We can't completely hide the fact that we've brought tasty treats into the wild with us, but we can greatly reduce our food's signal-to-noise ratio. This might well mean the difference between a distant bear catching a whiff of something and deciding to investigate—or deciding to ignore it and keep meandering along.

As mentioned earlier, your food choice factors into this as well. There are some foods that by their nature are simply messy and stinky. Messy means food odors get on you and your clothes. Stinky...well, stinky means you're more likely to attract hungry bears.

Bears are crafty critters, and they learn from experience. You may come up with an odorless cheeseburger in your home laboratory, but when you leave that unscented cheeseburger sitting inside your car, a wise old bear is liable to spot it and eat it—even without first smelling it—in the hope that it might just turn out to be food.

Similarly, bears have learned to recognize food coolers as places where tasty food can be found. And yes, alas!, even colored stuff sacks dangling from trees are likely to fire off light bulbs inside a hungry bear's head. Bears may be drawn by the sight of empty plates, pots, and such. Your best strategy here is to avoid building an elaborate kitchen. Keep your food and your food paraphernalia out of sight.

Here is where most of the disagreement occurs. First, be aware that in many parts of the Sierra (including the Main Mount Whitney Trail) the law requires you to use either bear storage lockers (when available) or bear canisters for food storage.

With the bear canister, rather than try to hide your food you simply put it somewhere where a bear can't get to it. The bear may play with the canister for a while, but eventually will give up and move on to greener pastures. Obviously, you'll want to put your bear can about 100' away from your tent at night.

Bear Canisters have the disadvantage of being heavy and bulky. They are hard to fit in many weekender-sized backpacks, and they can be hard to open and close—especially when you're tired and hungry. However, the Bear Can has the considerable advantage of allowing you to break nearly every other food storage rule and still be certain that bears, marmots, ravens, mice, and all other creatures great and small won't be able to access and eat your food.

In terms of peace of mind, particularly late at night when you think you hear something rustling about in the distance, the bear canister may well be worth all the inconvenience.

The traditional way to protect food from bears (and other animals) is to hang it. While this would seem to be the easiest and most convenient way to store food, it has proven unreliable. The current vogue tying strategy is called counterbalancing. It is complicated and requires a suitable tree—which may or may not be present. I doubt 50% of the people who claim to do it actually do so, because of the effort involved. Most of the other 50% probably do it wrong.

When I tie my food, I try to hang it as high as possible from a long, thin branch: at least 25 or thirty feet above the ground. I figure (perhaps incorrectly) that bears must at some point become afraid of heights. I also figure a thin branch will break beneath their weight, adding further discouragement. With your relatively odorless food high above the ground, stored in a low-contrast bag, hanging might just work.

I haven't lost any food to bears this way, but I'll tell you, it's annoying when you've strung up your food and you decide you want another bite to eat. Or you find you've forgotten to stash a candy wrapper. Sheer laziness in this regard makes a strong case for switching to a bear can.

For daytime travel, it's best to make regular noise to avoid sneaking up on bears. Obviously, if you see a mother and cub, give them a wide birth. Bear behavior varies regionally quite a bit. Always inquire with the rangers when you get your wilderness permit as to what's been going on in the bear department. They should be able to provide the most current information.

Finally, while my tips may have use where carnivorous bear species live (ie, Grizzlies), be aware that safe travel in these areas is beyond the scope of this article.

I carry a canister where I am required as well, but when I am out of bear territory and above tree line, I'v found a "Ratsak" to be highly effective in keeping marmots out of my food. The sack is a large bag composed of steel mesh with a two inch wide heavy velcro closure running along the top. I purchased it originally to keep ravens out of my food in the grand canyon, but at 8 ounces its a lightweight solution.