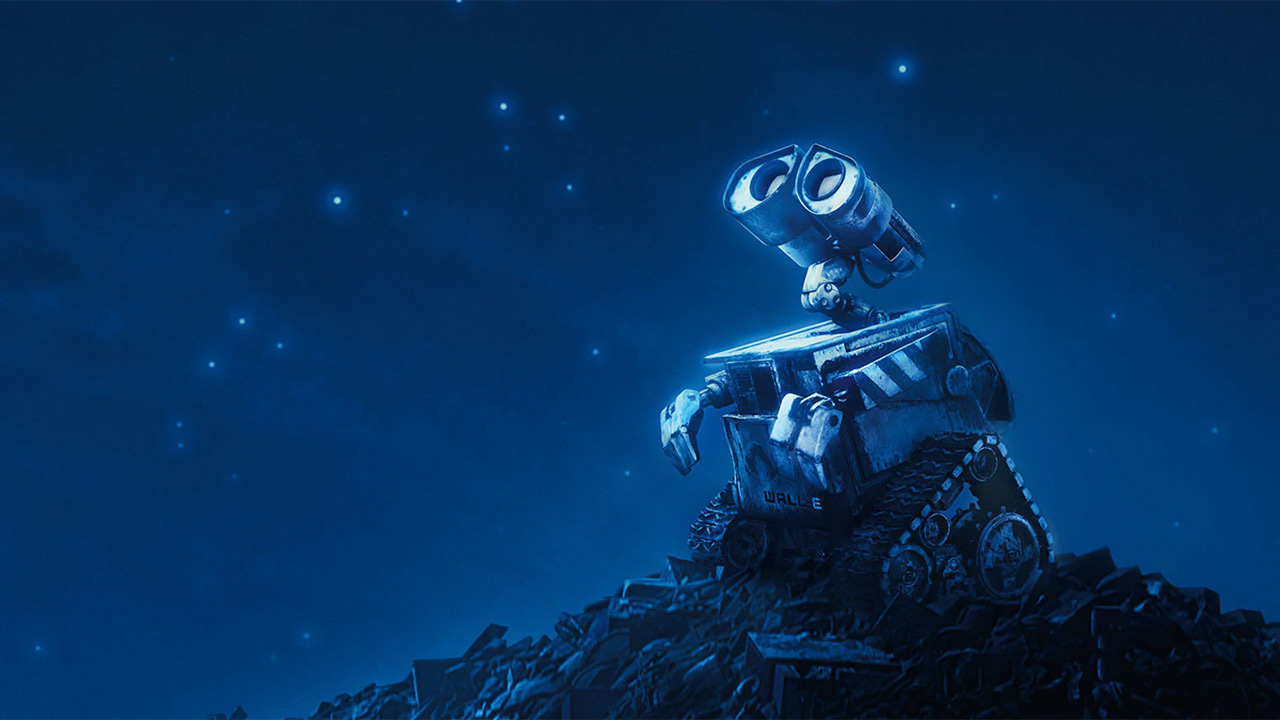 I envy those who went to see Wall-e without knowing anything in advance about the film. By now, word has spread about Disney/Pixar's new animated picture. You've probably heard at least one critic claim the film is brilliant.

You're probably also heard at least one so-called "Conservative" voice claim the film represents the worst of Liberal eco-brainwashing attempts, with special bonus condemnation for targeting children (more on this to come).

I will tell you, in my humble opinion, that "Wall-e" is a masterpiece. And if I could recommend one thing more than any other, it would be that you stop reading now, don't read anything else about the film, and go see it. Then come back, and I'll try to talk about all the ways in which this remarkable movie is surprising.

Surprise is an understatement when it comes to Wall-e. The film is a near-perfect ambush (reminiscent, I think of Doctor Strangelove) in its uncanny ability to sneak past human defensiveness and get you thinking not only of what might be but rather what already is when it comes to Life (and especially the American Way) here on Earth.

Wall-e opens with what surely ranks among the most stunning 30 minutes in American Cinema: a simple, dialogue-free sequence that takes place in a hauntingly-beautiful and utterly ruined post-Apocalyptic landscape.

At once familiar (populated, as it is, with assorted human treasures and trash, now all just piles of garbage) and also wholly alien, Walle's future Earth is as original and groundbreaking a vision as the classic landscapes of Planet of the Apes or Blade Runner.

That such a vivid evocation of the destruction of our planet comes in a Disney movie is only one of Wall-e's surprises.

Let us dispel the notion right now that Wall-e is a children's movie. It is not. And yet, you can take your little one to see Walle, and there will be nothing on screen that is inappropriate for them. Indeed, they will likely find the film amusing if not wholly enthralling.

This bit of magic is accomplished by infusing the robotic Wall-e with more personality and sensitivity than most films manage to eek out of their human players.

We've seen this before from Pixar (most notably in Toy Story), but I don't believe I've ever seen Pixar do such a thorough, artful job of breathing life into its animated characters.

Wall-e is a magnificent character: vulnerable and lonely, industrious and optimistic. As the last resident of Earth (aside from his cockroach sidekick), Walle is engaged in a critical task he cannot possibly accomplish alone, and yet, like a true Western Hero, Wall-e commits himself to his struggle with no thought of giving up.

Equally wonderful is the scene-stealing Eve, a robot probe sent to Earth to look for signs of life.

Fiery-tempered, with a tendency to shoot first and ask questions later, the sleek and elegant Eve effortlessly captures Walle's robot-heart. To be honest, she took me by storm as well.

Writes the New Yorker: "Watching Pixar's animated film 'WALL-E' must be a humbling experience for other filmmakers, because it demonstrates not just the number but the variety of ideas you need to make a terrific movie."

That breadth and depth of ideas remains on display as the film moves its title character from Earth to the Axiom, a luxury-liner spaceship on which we find what remains of Earth's human population. I won't spoil any surprises here, but suffice to say the film is far from finished once we leave Earth—both visually and emotionally.

The criticism that Walle has received (arguing it is propaganda, and bad propaganda at that) deserves special attention.

Have any of these would-be denouncers actually seen the film?

Wall-e does not ever even hint at those fighting words "Global Warming" or any of the other signature eco-crusades that Liberals fret over and (some) Conservatives mock. Wall-e is a commentary on consumerism run amok. It is a parable, if anything, on the perils of employing technology as a substitute for hard work in satisfying human desires.

In this message, Wall-e can actually be considered profoundly conservative, which some conservative commentators have actually noted, such as Rod Dreher (Crunch Con), who writes:

"Wall-E" contends that real life is hard, real life is struggle, and that we live most meaningfully not by avoiding pain and struggle, but by engaging it creatively, and sharing that struggle in community.

Is that such a threatening statement in 21st Century America? Judging by how unsettling Wall-e is to at least some viewers, I guess the answer is yes. Regardless, that such a subversive message should be hidden in a Disney product makes Wall-e all the more satisfying.