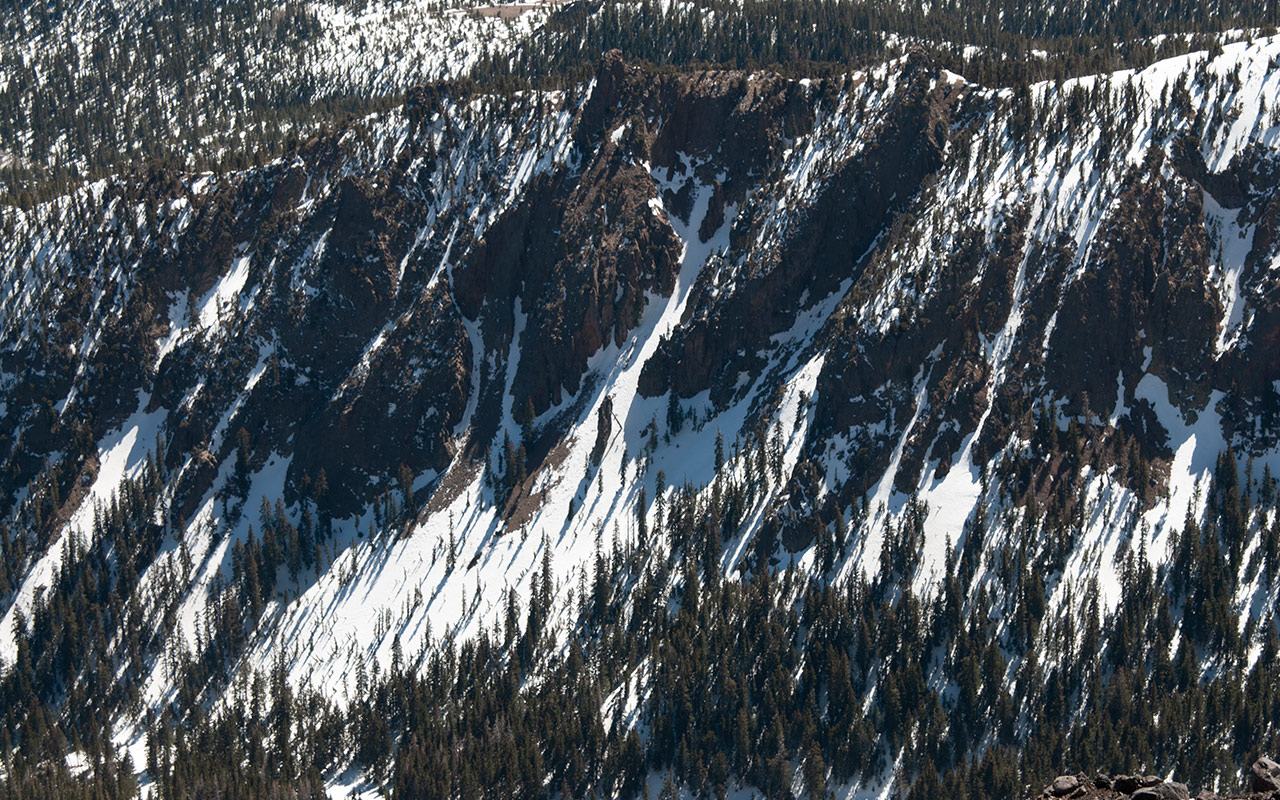 Blame it on Chamonix—exposure to the big mountains of the French Alps made a big impression on me. I bought a Charlet-Moser axe and crampons, intending to incorporate the tools in my backcountry skiing when I got home. That axe and crampons stayed in the closet until our local ski area, the Arizona Snow Bowl, closed for the season.

Then, with the mountain still coated with a fine snow pack of spring corn, I decided to drive to the inner basin, skin up to Core Ridge, and then find a north-facing couloir to test out the new gear.

This adventure marked the longest ascent I'd yet attempted on skis and skins—a startling two whole miles from the car to the base of Core Ridge's north gullies! The ridge splits Inner Basin, itself the half-open crater of a massive volcanic eruption some 800 years ago that unfairly cheated my hometown mountain of nearly 4000' of vertical (originally, the San Francisco Peak's height is estimated to have exceeded 16,000 feet).

To the north, rising 3000 vertical feet, was the summit of Humphreys Peak, at 12,600' the highest point in Arizona. Below lay the rubble of a 1977 avalanche. Yes indeed, the snow did slide on the San Francisco Mountain, just not very often, which was lucky for the mountain's backcountry skiers (myself included), who rarely bothered to concern themselves with such intangibles as snow pack cohesion, wind loading, or hidden layers of instability.

Still, looking at acres of mature trees scattered like toothpicks across the ground gave one pause. Or at least made me want to look elsewhere.

The eastern edge of Core Ridge ends (or begins) as essentially a series of cliff bands. I had hoped to find a skiable line down that first rocky face, figuring it would be the steepest line yet skied on the mountain, and thus Chamonix-worthy. If such a line existed, however, it had long since melted away, so I continued traversing along the north side of the ridge, looking for something interesting to climb up, via crampons, and then ski down.

Something interested soon appeared: a steep, narrow chute that wound its way to the top of the ridge, only a few stops away from a chute I’d skied earlier, in winter, which we had dubbed, Powell's Prayer in honor of a friend who'd fallen down it and, somewhat miraculously, escaped harm.

What made Powell's neighboring chute particularly interesting was a feature that occurred just above the apron at its base: a short, perhaps 15' cliff, which was currently covered with clear waterfall ice. An ice climb to begin a ski descent? Viva la France! I skinned up the apron as far as I could, then stopped and switched over to crampons.

With skis strapped to my back, crampons on my feet, and ice axe firmly in hand, I began my ascent. Or tried to, at least. Walking in crampons proved an ungainly, awkward experience. I tried going straight up, traversing a bit—nothing felt natural. I soon shredded the lower leg of my ski pants when the expensive Gore-Tex fabric got hooked by one of the crampons' razor-sharp points.

Apparently, it was important to keep one's feet well away from each other while walking. This tidbit of insight was reinforced when I hooked one crampons' points on the straps of the other, the mountaineering equivalent of having your shoelaces tied together.

As for the axe, that wonderful, sexy, menacing axe...I wasn't sure what to do with it.

The ice axe seemed like the sort of thing that might prove useful, given the right conditions, though I wasn't sure what, exactly, those conditions might be. My axe seemed a little too short to make a good walking stick, and one mountaineering axe seemed a little inadequate when I reached the base of the ice cliff and begin plotting my ascent.

While crampon points bit eagerly into ice, allowing me to climb with alarming ease, the axe didn't seem nearly as secure. I got about half-way up before finding myself hung up on the cliff, not feeling confident enough to go up or down. It was a humiliating predicament, given how minor the cliff actually was. I envisioned sounds of French laughter from across the Pond.

But the actual ice cliff was narrow, and I soon realized by moving slightly to one side, I could use the rock walls to provide all the handholds I needed. In this manner, I successfully passed the crux of my ascent: one hand on rock, one picking away at the ice with my axe, and crampon points alternately finding ice, rock, or snow, whichever proved most useful at the moment.

With much satisfaction I rounded the lip of the ice cliff and reached solid snow above. I had successfully climbed an ice cliff. Tres magnifique!

The rest of the climb was strenuous but uneventful, a short thousand vertical feet up to the top of the ridge. The slope's angle seemed to hover around 45°—not exactly the Extreme Experience™ I was hoping for, but at least there was an ice cliff waiting below to spice up the descent.

When I reached the top of the ridge, I sat down in the snow, ate a snack, and took off my crampons. I wasn't really sure how to attach my ice axe to my pack, but I'd seen photos of upside-down axes hanging from mountaineer's packs, so I tied my axe to my own pack in what I hoped was similar fashion.

I snapped into my skis. AARGH!! Skis now felt alarmingly slippery after the rock-solid traction of crampons. The chute seemed steep and narrow, my last turns weeks away. It took a bit of a leap of faith to make that first turn, but after that, the angle seemed moderate enough. One turn fed naturally into another, and soon I was working my way down the chute, traversing across a rock band where necessary, then down again, heading toward the only thing guarding the finish line: the short ice cliff.

My plan was to ski over the cliff in one continuous push, jumping the whole step without any hesitation. As I neared the cliff, however, the view from the top looked vastly higher than 15 feet. Moreover, I saw a heretofore unnoticed tree sitting square in the middle of the runout, whose bare trunk lay perfectly positioned to catch me if I made even the slightest bobble on the landing.

I stopped well above the ice cliff to take a more considered look at that tree. To the left, the apron merged with a cliff line that curved back around, making that a poor direction to aim for. To the right, a thick stand of trees stood in the way. The only 'safe' direction was to straight-shoot the chute: point the skis straight down and jump over the cliff.

Problem was, that one lone tree was positioned exactly in the middle of the route.

Over the years of my illustrious ski career, I'd learned to avoid trees, even skinny ones. Once, while tree skiing in-bounds on a funky combination of 8" of light powder over sheer spring ice, I'd hooked a tip and gone down. Normally, deep powder would have gently brought me to a stop, but instead I skidded along the ice beneath, right into the path of a 5" tree trunk, which was all but indistinguishable from a steel pole when it caught me across the hips.

Still unsatisfied with my options, I side-slipped down a little farther yet—right onto the actual ice that covered the lip of the cliff. Suddenly, I was imitating the hapless Wille E. Coyote: my legs seemed to be spinning in a circle as I tried in vain to get some purchase on the clear water ice. In my desperation, my hands shot out, grabbing the nearest object, which happened to be the rock of the chute's sides.

That halted my slide over the edge, but my legs remained uselessly strung out beneath me, unable to get even a minimum of grip over the ice.

Now what, I wondered?

Climbing back up didn't look like much of an option, given how much I was struggling just to hold my current position. Down, in fact, looked like the only feasible direction. I'm not sure what, exactly, I hoped would happen, but I began down-climbing along the edge of the chute's walls, until I actually passed over and beyond the lip of the cliff.

Maybe I hoped the cliff was short enough for me to hang from its lip, and then drop safely to the snow below. Soon enough, that’s exactly where I was, arms extended, body hanging over the cliff, feeling the cold icy wetness of the ice pressing up against my body.

Unfortunately, the bottom of the cliff remained well below my dangling legs and skis. It was quite a bit higher, in fact, than anything I wanted to drop over, particularly in my current, absurd position. A wave of panic struck me. I made a quick, desperate bid to climb back up, hearing my ski edges rake hopelessly over ice mixed with rock.

And then, just like in the movies, my quivering fingers began to give. I held on as long as I could, watching my fingers pop free from the rock one by one. Then the last finger goes and I'm falling: Help me, God!

As if in answer, my skis caught on the rock, flipping me upside down, so that I was now speeding headfirst toward whatever waited below. It was my head, in fact, that hit the snow at the top of the apron, at the base of the ice cliff, which threw me over again. My body continued to race downward, sliding on top of snow, toward the rounded wall of rock that curved from the west.

I had just enough time to roll my shoulders before—POW!—my back smashed into that rock wall. My little MontBell pack took the full force of the blow, no harm done, and I skittered at last to a stop. Nerves jangling, I rolled over to my knees and looked uphill at what was once again just an innocent little 10-15' step of rock and ice.

My arms were scraped and bleeding, and various regions of my body seemed alternately bruised or strained, but it was clear I was not seriously injured.

Sometimes I think failure in the mountains is the far better teacher than success. My episode on this 'ice cliff' taught me to be a lot more conservative in approaching technical climbing while skiing. Maybe a little too conservative...I didn't return to the backcountry with axe and crampons for a long time afterward. But that's another story. :)

Thanks for the great story and insight.

Nice story. I hope to do some backcountry skiing in AZ snowbowl area in January 2011.

Why doesn't the snow bowl put lifts higher up the mountain and open more terrain? Based on photos and Google Earth, there appears to be some great terrain up there.

Lift access is actually great: 11.5K. Long ago, the Santa Fe Railroad company intended to build a major ski area in the Inner Basin area. However, the San Francisco (or, to others, Kachina) Peaks are a small and highly personal mountain. Many forces claim it as their own, and development has been an incredibly polarizing issue even to this day...