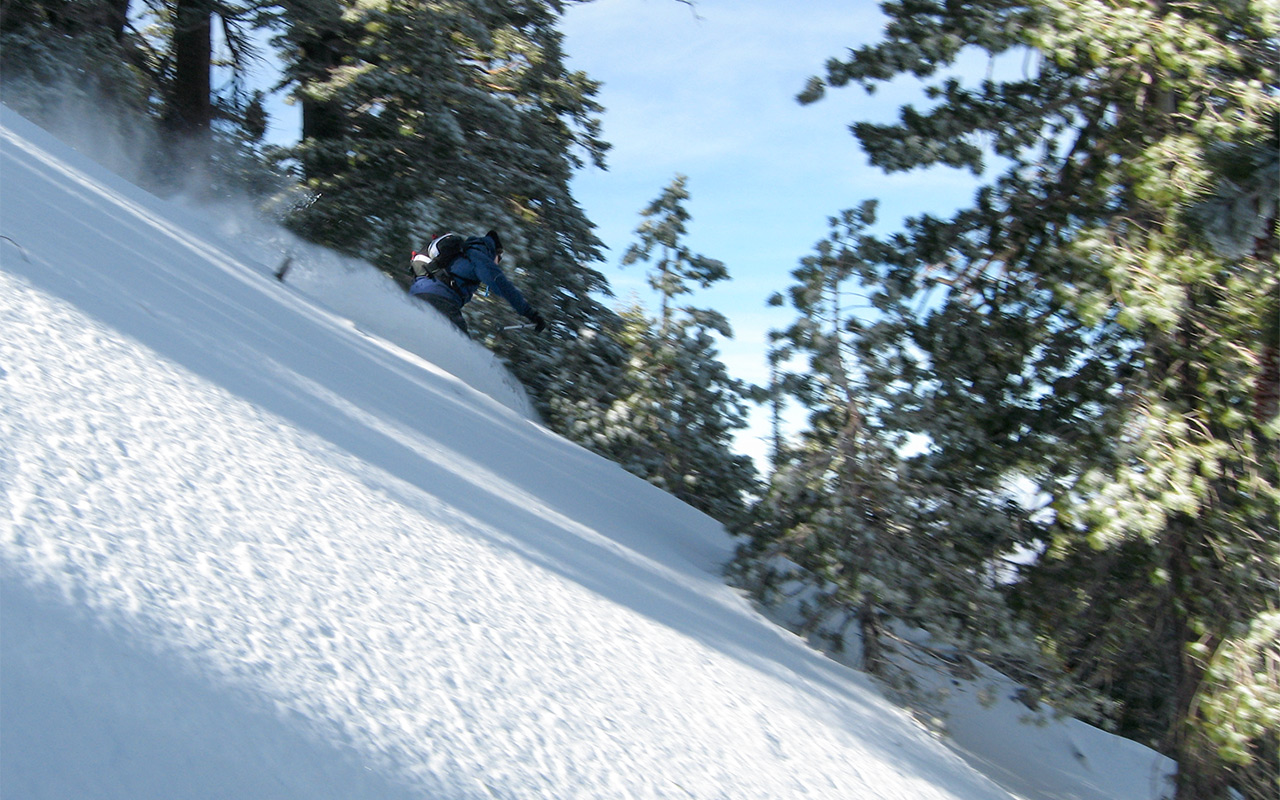 Bill and I drove up Highway 2 from Wrightwood to Vincent Gap for a little Baden-Powell action today. BP is one of those curious Southland Peaks that occasionally allows drive-up-to-snow backcountry skiing access, provided the road is open past Mountain High—and provided you arrive early enough to beat the traffic up to the ski area, which can be full-on SoCal nutty.

With the proximity of the recent storms, I was expecting good snow. Well, that didn't exactly happen. Seems some combination of rain, high winds, and ultra cold temps has produced one cranky snowpack, complete with rain crust, surface hoar, and hidden ice glazes. Sheesh! This wasn't exactly the easy cruise I was hoping for, bad back and all, but it sure felt good to get on snow after the very discouraging start to the ski season that I got four weeks ago in the doctor's office.

We found it extremely difficult to skin up: the crust was too icy to set an edge without ski crampons (both of us were without), and it was dusted with a very sugary thin coating of snow that only added to the frustrations. Take off the skis to climb on foot, and we punched right through the thin crust, into 3-4' of unconsolidated powder that truly gave meaning to the phrase "earning it."

Bill and I got about 1800' vertical up before we finally decided to call it a day. The climbing was brutal. Skiing down offered a few good turns, but all that icy-crusty action made things challenging, especially as I was trying to avoid doing anything foolish to my back. Still, just getting out there and getting my boots wet was very encouraging. Actually, what's hardest for me right now is driving, and putting on my socks and boots. Keep me upright and locked in, and I'm good to go. :)

I did take a few minutes to dig a very cursory snowpit at the apex of our climb, on what would be a due-north aspect around 8200'. The upper layer was a solid crust on top of 4 feet of cold, sugary snow. I kept my eyes out for thicker slabs but didn't see any. That said, we never saw any of the wind-affected parts of Baden-Powell, where things could be completely different.

If a heavy accumulation arrived in the next few days, I would expect very unstable conditions on top of that icy, hoar-dusted crust—plus there is not much support underneath. All in all, I suppose these are fairly typical observations for a December snowpack in the Southland.

Another concern, I'm sorry to say, is going to be ice.

Conditions are already slick enough to make exposed areas dangerous in the backcountry. You may recall last season's ice persisted for months, rendering whole aspects unskiable in certain parts of the range (ie, Ontario Peak). I sure hope we don't see a repeat this season. That's it for now. If you do venture out into the San Gabriels, watch out for that ice and be especially cautious if new snow arrives before the snowpack settles.