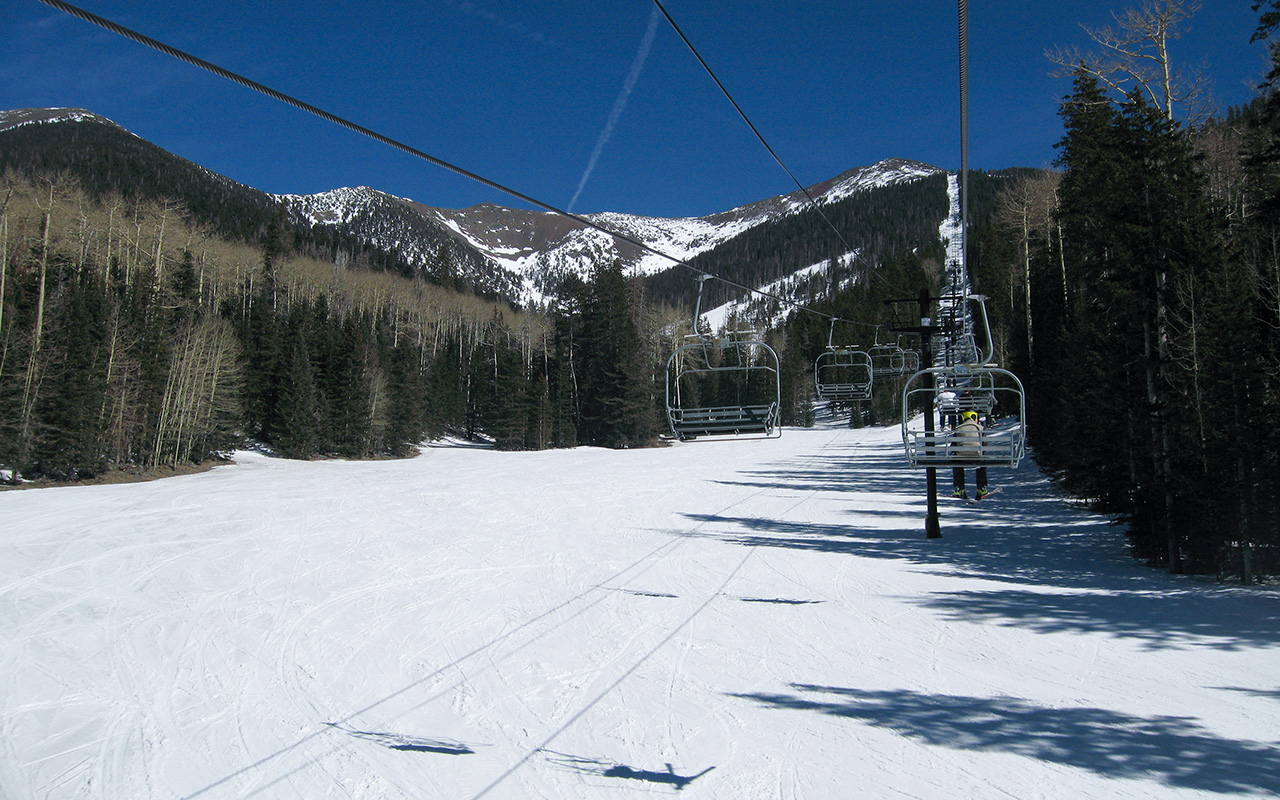 Well we're working our way back home now, with a stopoff in Flagstaff for a few days. I'd kind of hoped to do some sort of backcountry tour out here, but a week of record temps has just nuked the snowpack. Plus the forest service has all the key access roads closed, and I'm thinking, let's save the big gruels for the Eastern Sierra, eh?

So how about a nice in-bounds ski day at the Arizona Snow Bowl? I started skiing the Snow Bowl in 1976, when I was just a wee one. Returning now is kind of like going back to mother's milk: a little bizarre, but oddly reassuring.

The Snow Bowl is one of those endangered ski areas—a little too far south, without snowmaking, and perpetually embroiled in developmental disputes. The key problem as I see it is that the San Francisco Peaks are practically the only significant mountain in Northern Arizona (okay, I'm excluding a short list of others).

It's kind of like the only good surf spot: too many people with too many different agendas feel way too possessive about this mountain. If we could pop up five or six other good-sized volcanoes in the near vicinity, I bet a lot of these ills would cure themselves. Barring that, there are no easy answers as to how to manage such a small mountain.

For me the Snow Bowl remains a shockingly effective time machine. Every time I ski there, I relive three decades of ski memories, and I find myself wondering where the years have gone. So much has changed it is often overwhelming, but making turns on this special little mountain still puts a smile on my face. Let's hope I can keep skiing here for another 30 years!

Wow, this post brings back memories. That old double-seater chair that used to run up to Midway, then on to the top of Ridge, the bite of corn snow blowing up through The Bowl at 40-50mph. The dark pine logs of the old lodge, windows coated in condensation from the steamy breath of locals and snot-nosed kids that packed the place wall to wall. And the early days after first really learning how to ski and just putting in run after run after run, determined to make the most the (exorbitant!) $17 ticket, or whatever it cost back then.

I haven't skied there, or even visited much, in the last 20 years. Memories of the 70's and 80's, wrapped in amber I suppose.