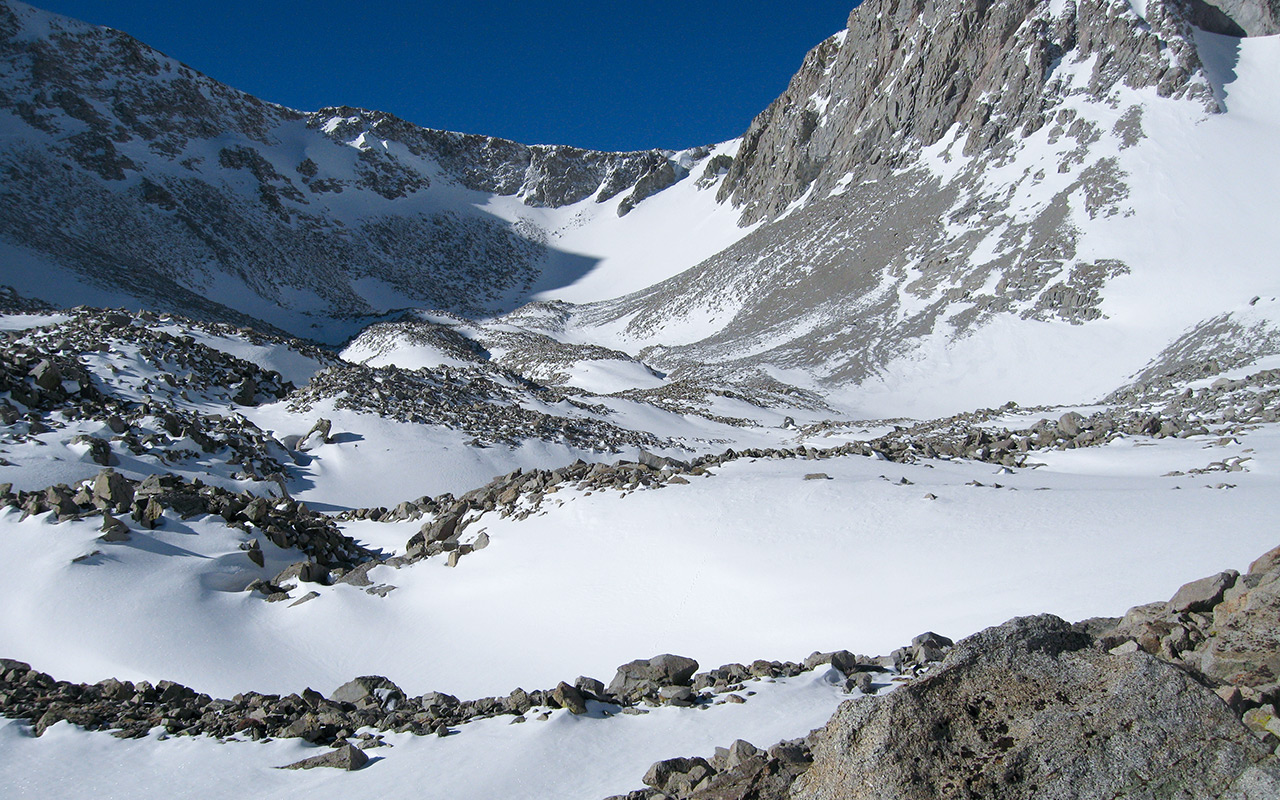 The plan was simple: Tyndall in a day. But as I made the pitch to my climbing partners, one by one they found various reasons to be elsewhere. And who could blame them? To get to 14,018' Mount Tyndall, you must first contend with one of the worst approaches in the entire Sierra—the Shepherd Pass trail.

I think Summit Post puts it best when it says Shepherd Pass Trail's designer must have been on crack. As a means to get to Shepherd Pass, the trail's quirks are many, including the fact that the trail starts in the wrong drainage (Symmes Creek), necessitating a withering up-and-down and up again.

Unfortunately for skiers, some of the Sierra's most significant skiing lies in the Shepherd Pass region, including access to Mount Tyndall, and (via Williamson Bowl) Williamson's north face. I have pondered this seemingly intractable problem for some time now: how to get myself plus skis atop Williamson or Tyndall.

The obvious choice—establishing an overnight base camp atop Shepherd Pass—is unappealing. It is over 10 miles and well over 6000 vertical feet from the trailhead to the top of Shepherd Pass, to say nothing of the peaks beyond. And so, rather than wreck my 140-pound body carrying heavy overnight loads up the pass, I hatched a scheme to try to do the whole route in one big push, stripped down as light as possible.

I parked my car at the trailhead and chilled out in my sleeping bag until 12 a.m. Then, maniac that I am, I got out of my car, put on my ski boots and backpack, and started hiking upward in the dark.

The hiking-in-ski-boots issue, incidentally, is a significant one. More on that to come.

I kept my pace intentionally slow, wanting to preserve as much strength as possible for the long day ahead.

Traveling lighter was definitely noticeable, although I still wasn't as light as I would have liked. There was extra water to carry (much of the way is dry), extra food, climbing gear, clothes.

I made Symmes saddle in just under four hours—slow, to be sure. After that came the long descent toward Shepherd Creek.

Shepherd Pass was still a long way ahead.

Snow coverage was sparse overall. At times, I had to take off my skis and scramble over sections of bare talus.

When the Pass came into view, I stopped and started thinking. It was 8:30 a.m.

Eight and a half hours of continuous climbing—and Tyndall wasn't even visible on the horizon.

My feet were starting to blister up. My body felt out of sorts. Climbing through the middle of the night had thrown my rhythm. I wasn't well hydrated. I wasn't well-nourished. I wasn't feeling strong.

I began to suspect getting enough sleep was more valuable than I'd realized. And my super-early start wasn't looking early enough.

Unwilling to admit defeat, I pushed ahead and made it to the top of Shepherd Pass, where I finally got my view of Mount Tyndall.

I started toward Tyndall, then stopped myself. I knew if I kept going I could make that summit, but I was exhausted, and I still had to get all the way back down. It was time to turn back.

The steepness of the headwall below the pass plus the softening snow made for challenging skiing. Still, after so many hours spent crawling upward, it felt wonderful to at last be streaking back down the hill.

This part of the Sierra is clearly one of my favorite. It's just so hard to reach!

At the bottom of the Shepherd Pass headwall, I stop and survey my ski tracks with satisfaction.

Of course, considerable grief awaits me below. The snow—interrupted by talus hops—is already becoming alarmingly soft.

And farther down lurks that blasted Symmes Creek Saddle, with another 3000 vertical feet of trouble after that.

When at last the snow gives way, in the vicinity of Mahogany Flat, I pull off my ski boots and switch to hiking boots, which I've stashed here for my descent.

Crazy as it sounds, this is a lifesaver. My feet are in rough shape already. Hiking downhill in ski boots from here would cost me my toe nails, at the least.

At this point I'm just utterly beat. So wrecked, in fact, I actually contemplate abandoning my ski boots. I'll throw a contest: find Andy's boots in the Symmes Creek Drainage and you get to keep them!

But no, I decide I'll close this one out in good form. I try various means to carry them ranging from unpleasant to unbearable. One so-so method: use the boot's power strap to attach it directly to your backpack waist belt.

Carry the other boot in hand, alternating as your arms get tired.

Carrying boots in my daypack proves untenable. The frame (and thus my back) can't handle the load.

Carrying skis and boots down the Shepherd Pass trail on a hot, dusty Eastern Sierra day leaves one with a lot of time to contemplate life's greater questions—like why anyone would ever take up such madness, let alone return to do so repeatedly.

I find visualizing myself back at the car helps. Or maybe I should call it fantasizing. The day wears on. I begin the climb up to Symmes Saddle, about 500 vertical feet of gain, thinking increasingly venomous thoughts about the trail's designer with each and every step.

For the day's finale, I must return to skis on the north side of Symmes Pass. The upper 1000' are snow-bound. Ordinarily being able to ski part of your route is good news, but this means I must put battered feet back into boots. Additionally, the late-afternoon heat has cooked the snow here to a nearly unskiable consistency, making the skiing scary and exhausting, a perfect capstone for this marathon of a day.

Eventually, Sierra snow gives way to pulverized Sierra granite. I shuffle across a few sections of bare sand in my skis before changing back to hiking boots for good. 2000' vertical more to go. My mind drifts; my body slogs onward. Afternoon shadows lengthen. When I reach my car, at last, I check the time: 4:05 p.m. Sixteen hours straight. Guess I should've gotten an earlier start. :)

The best method I've found for boots is to carry your skis A-frame and put the boots in the bindings. The most comfortable, and makes your pack look like a jetpack.

Andy, what kind of boots were you in? Not that it necessarily matters, but I'm just curious.

And, why aren't you on Dynafits?

And, I have a partner I should introduce you to that enjoys similar ill-advised adventures. ;-)

I'm on Garmont Megarides. My foot falls in between shell sizes, so the fit is slightly too short. Fine for skiing, but bad news if I have to hike down more than about 1000' vertical or so. Next year I expect I'll be using Radiums, which are sized differently and should let me hike up and down without worrying as much about foot damage. Still, there's always an efficiency penalty when you hike in ski boots, and always a weight penalty when you carry ski boots. No easy answer there.

As for Dynafits, cost mostly. I'm saving up for a pair to create a fast-n-light rig. As for partners, let me know. Creating ill-advised adventures is the unofficial motto over here. :)

one last thing: the boots-in-bindings carry doesn't work when you're bushwhacking. Otherwise, that's a totally viable way if your pack transfers the load properly--which isn't always the case.

I aplause your madness! Don't give up. I am an Ex marine corps feild medic and work as trauma nurse now days. I am also an avaid explorist. If I may offer my advice... You need Lots of CALORIES not to mention layers to plod throgh the night, a head lamp. and the abilty to hunker and build a fire minamim And have water, salt and potasium supplaments. I think with enough calories you could do Tyndal in one "long-ass" day. You could make food drops on your way up and lighten your load pretty quik. Really hope you go back. I like the idea of base camping or at least droping some essentials and summiting light weight. I think it is a lot safer. See you on or OFF the trail!!! E

Thanks for the encouragement! I did return to Shep Pass a week later and successfully skied Tyndall -- see: http://www.sierradescents.com/skiing/tyndall/2009/north-rib.html