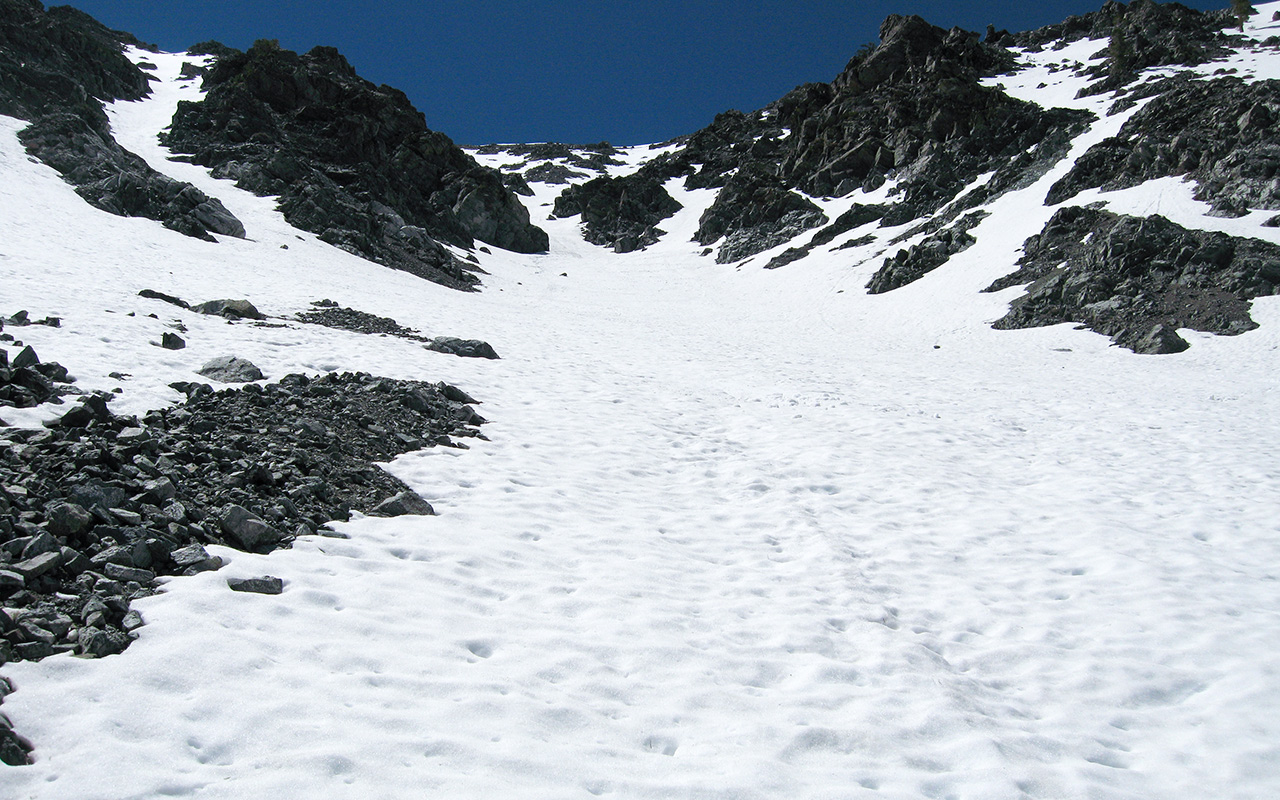 Coming off my Tyndall adventure, I thought it would be nice to do an easy tour this weekend...so I decided to ski Mount Baldy's north face. Okay, maybe my difficulty scale got thrown a little out of whack on Shepherd Pass, but the advantage of doing something hard right after doing something really, really hard is, the hard thing seems a lot easier.

That's the theory, at least.

Complicating matters today was the fact that I really didn't know how much snow was left on Mount Baldy. Basically, all aspects of the mountain except north are bare now—bone dry, no skiing allowed. That meant I'd be climbing all 3850' to Mount Baldy's summit (from the Manker Flat trailhead) with skis and boots on my back. And doing the same to get back down...not including climbing back up the north face.

Okay, maybe this one qualifies as really hard, too.

I was in the mood to push today despite the heat, so I made Mount Baldy's summit around 10:20 a.m., having drawn many curious stares and comments from all the other hikers. Oddly enough, I was apparently the only one with skis on the mountain today. Go figure.

Atop Baldy, my first glance down the north face looked pretty bleak. The best snow—the only snow, really—was a finger stretching down West Baldy's north face. So, I kept on hiking to West Baldy, and geared up for a ski descent.

When I got up West Baldy, I saw that the snow finger from the summit connected to a fine snow field in a gully leading a long way down. Huzzah! Off I went. Snow up top was alarmingly mushy-soft, making me think I'd need to abort, but hardened up nicely in the gully, making for real-live good skiing.

Skiing Baldy's north face, it must be said, is like playing a high stakes game of chicken. How far down do you dare go? There's no way out except to climb back to the summit, so whatever elevation you give, you're gonna have to fight to get it back.

Apparently the thought of solo-post holing while getting cooked by the sun wasn't enough to discourage me today. I rode the snow all the way down, dropping at least 1500 vertical feet.

Let me just say if I wasn't tuned up from Tyndall this would have been suicide. But, I felt strong on the climb back up. Took me an hour and a half to get back to the summit ridge.

I was briefly tempted by all that smooth corn snow to try another lap, but luckily sanity prevailed—especially since I had that 3850' back to the car still on the agenda.

Back up top I took my ski boots off, switched back to hiking boots, and loaded up the backpack. After a snack and some water, it was time to close out the trip.

I buzzed down the trail, passing many, many more curious onlookers.

What was I, the trail freak show today? I did my best to be polite, though I did secretly try to come up with a variety of snappy comebacks.

By now, the work and the heat was really getting to be a grind. Skis and boots are heavy on the back, any way you look at it. That helped motivate me to keep pushing the pace, even though the heat was just insufferable.

As worked as I felt when I finally got back to the car, I have to say I really enjoyed this one. I skied about as far down Baldy's north face as I've ever dared to go, and I made it back out in one piece, more or less. Snow quality and texture was way better than I had any right to expect. Still, I think this was pretty close to the bitter end as far a skiing in the Southland goes.

Forecast temps today were for highs on the summit in the 70's, with lows only dropping into the 50's. Not nearly cold enough to keep the snow going for long. Curiously, I never felt worried about wet slides, despite the lack of a hard overnight freeze. The snow was almost perfectly consolidated, and of good firmness. Never saw any significant rollers or even mini-sluffs.

This was sure a strange season in the local mountains, but I have to say, it had its moments. And for me, it definitely ends on a high note.

'Love the before and after pictures of you! Also, come on, ya gotta share some of your wittier comebacks. Surely you had at least one or two ones worth quoting... ?

It was funny...being singled out like that started to get sort of disconcerting. A strange experience--though no one (obviously) was trying to be rude. Just made me feel like I was some kind of unicorn or something.

I never really did come up with a good snarky comeback. But I'm thinking a T-Shirt with, "Yes there is snow!!" printed on it would have worked. :)

I've been following your website/blog. I'm an out of shape newbie to backcountry, I do quite a bit of on-piste. I'd like to do the North face of San G. next weekend , wonder what your experience has been up in that area? thanks.

I've never actually done Gorgonio from that direction, but my sense is that's a pretty big bite this time of year. I'd expect a long haul over dry ground to get to snow. From Baldy's summit, SG looked thin, but certainly no worse than what I was skiing.

Maybe someone else has more current conditions??

San G. from the north is a long haul no matter what time of year. It's at least 7 miles of slight uphill before you even get to a slope steep enough to justify skiing and it's a slog even when covered in snow. I'm guessing another 2 or 3 on top of that to get to snow right now, and then another 2 or 3 miles to the top. Then, you have to hike it all back out again.

Dude ... you're an animal. I've decided to take some mountaineering classes when I finish my MBA in September. It's largely your website that has inspired me to get back into it. I haven't climbed and skiied a mountain since my early 20's ... far too long to be out of the game. Next year, my goal is to be ready to hammer avalanche gulch on Mt. Shasta. Sounds like an epic descent. Thanks for the inspiration!!! By the way, that T-shirt idea is fantastic!