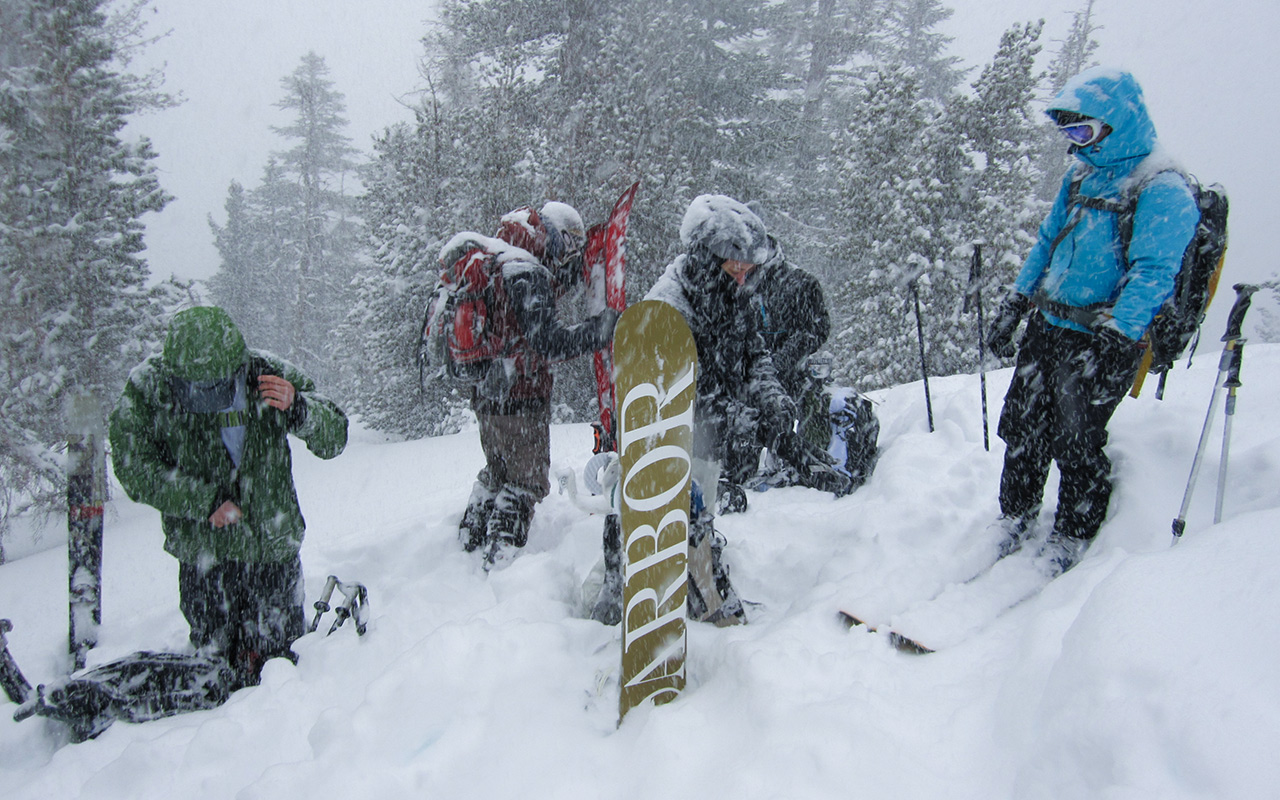 Following up on my post about my reluctance to take an avalanche course, I thought it would be appropriate to talk about what finally motivated me to bite the bullet and go take one. For starters, the opportunity presented itself.

I had the money saved up, and I had some free time which coincided with dates that SMG was offering a Level I class. Also important given the past few winters, there was 'interesting' snow in the Sierra, with a big storm on the way. Conditions were good—who wants to take an avalanche class when the mountains are bare or boring?

Curiosity was also part of my motivation. I like to learn about new things, especially things I'm already interested in, and snow science certainly qualifies. I had a vague sense that there was a lot I didn't know, and that taking a class would be at least a start toward filling some of the many gaps in my knowledge.

In that sense I wasn't disappointed.

You could say I learned more about the depth of my ignorance than about avalanches themselves. That may not be the best sales pitch for the Level I curriculum, but it does provide a strong motivation to keep learning.

On the subject of knowledge, I should say that my website provided a key bit of motivation as well. One of the things I'm uncomfortable with as a blogger is the inevitability of spouting nonsense. I try not to do it wherever I can, of course, but the format (fast, daily, unedited writing) practically guarantees that some percentage of what I write will, in fact, turn out to be nonsense.

I've deliberately avoided writing in detail about my snow assessment in the backcountry for this very reason. Taking an avalanche class, I reasoned, would be likely to reduce the chances of me saying something ridiculous or reckless about snowpack. The success of this, I suppose, remains to be seen.

I also took my class because I wanted to be a better partner. When we travel together in the backcountry, the hope is that we're safer together than solo. By beginning a more formal avalanche education, I do think I bring more to the table as a partner. I'm more likely to make a positive contribution to discussions about snowpack stability now, for example. I know more about safe travel techniques. And, my rescue skills are certainly improved in the event that someone else ever depends on them.

Last and by no means least, I really, really, really don't want to get caught in an avalanche. I worry about this regularly, so much so that I question my involvement in this sport despite how much I love it. When I go out into the backcountry, I want every possible advantage.

As I was skiing this past weekend, and my partner was digging a snow pit, and running some tests, and we were talking about the results, I found myself thinking that I still didn't know nearly enough.

Given the uncertainties snow presents us with, it's not possible to ever know exactly what's going to happen. But that's no reason to hide behind ignorance. So I'm going to keep learning every chance I get. And, when possible, I'm going to share as much about what I learn as I can. Because if I'm in the dark about this stuff, so are a lot of you. And we're all in this together, I think. That's my motivation.

Excellent points Andy. It's a tipsy line to draw conclusions and write about avalanche safety when so few of us are experts and feel good about making constructive assessments that will ultimately determine the fate or outcome of you, your partner, or worse yet, someone you don't know hanging onto every word you write herein. I think we all understand you assume no responsibility and every one of your readers need to carefully plan their own trips and second guess the opinions of just one man. That's why it's important to listen to everyone, novice and seasoned skier alike, to be sure there is a positive and fun outcome for everyone involved. Often times a novice with good instincts is a better asset to a group that an seasoned pro with a set agenda. One of the things I've noticed you're doing more of, at least from what I can tell in your writing, is that you're digging more snow pits these days. I'm certainly not against these, the more information you have the better, but rarely do we dig snow pits on the aspect we tend to ski, and even if we do we almost never assess the snow pack on the most dangerous part of that aspect. It's just not practical and it's dangerous in itself. Since snow pack varies, even within a few feet, I never put too much emphasis on a pit evaluation, especially since the interpretation of it is somewhat subjective to begin with. I've always felt a compression test, coupled with a proper and premeditated route selection, and most importantly, an agreement and consensus of that plan within the group is the best safety precaution a back country skier has. This of course is second to having done your weather analysis and reaching an agreement on what you might expect the conditions to be like prior to even beginning your ascent. In this way, we prepare ourselves, packing gear to deal with the plausible, often times, and thankfully never using it. For instance, I hope I never to have to use my beacon. And it's a shame the industry is capitalizing on fear, charging upwards of $500 just to get into the game. I don't believe beacons safe lives, but I wouldn't want a partner who didn't carry one either. How's that for a contradiction? Then again, snow science, in it's interpretive nature, can be full of contradictions. There's always an unknown risk.

Brian Tremper says one good snowpit from a representative spot showing stable snow has a 60% chance of being right. That's 60 percent as in just barely better than a coin toss. So I'd say you're right to be wary of what a pit tells you.

I'm mostly using pits as a correlative tool--trying to link what I see in a pit with other observations. Ie, if you see bona fide shooting cracks (not just crust collapse), what does that look like when you run a compression test?

You're braver than I am. If I see cracks of any kind I'm simply turning around or finding someplace else to ski. And I'd feel uncomfortable resting my laurels on the 60-90% rule described above. But I agree my confidence level would rise exponentially if I were digging multiples and finding complimentary results. Then again digging three or four snowpits, especially if your spending 20 minutes on each doesn't seem practical for daytrippers climbing 4000 feet.

Took my Avy 1 last year. I know enough now to be dangerous. It's a start. I'd have to dig 50 more pits with people who could check my work before I'd claim to truly be able to read one. What it did help me with was terrain choice, angle and aspect. I find I'm making decisions on the way up in terms of where I want to be on the way down and when.

More good stuff Andy. My philosophy is that one has to collect evidence from multiple sources to be safe. The prep work before hand - what's been going on with the weather, temperatures fluctuations, any recent rain then freezing? What's being reported? Things like that merely give one a starting point.

People who stop there or rely on "I have a beacon" as their green light are quite frankly far more dangerous in my opinion.

What's important to me is the real time assessment at every stage of the climb. How does the snow feel; hollow, consolidated, compacted, unconsolidate? Is it being reactive in any way? If so how and to what degree? Can I feel any layers when probing with my pole? How does it react when skiining vs when booting? Can I see any natural activity? How recent? How did it start (slab release, rock-fall release, point release?

How is it reacting around trees and rocks while on approach?

What's the temperature forceast for the night and day? Is it warming up faster than expected. Any sunball or pinwheel activity?

What's the wind been doing? Are we leeward or winward? Any loading? How extensive?

The forecasts help us understand what someone else observed. The pits help understand what's going on deeper down. A Rutscblock test gives a beter indication of how the snow will react to a skier/boarder (in my opinion).

All of these data points work together to form the foundation for safe decisions. The beacon, probe, and shovel are there for when we get it terribly wrong - which like a PLBs and Airbags - you hope you never have to use them.

Knowledge is a safety tool. Keep sharing it.