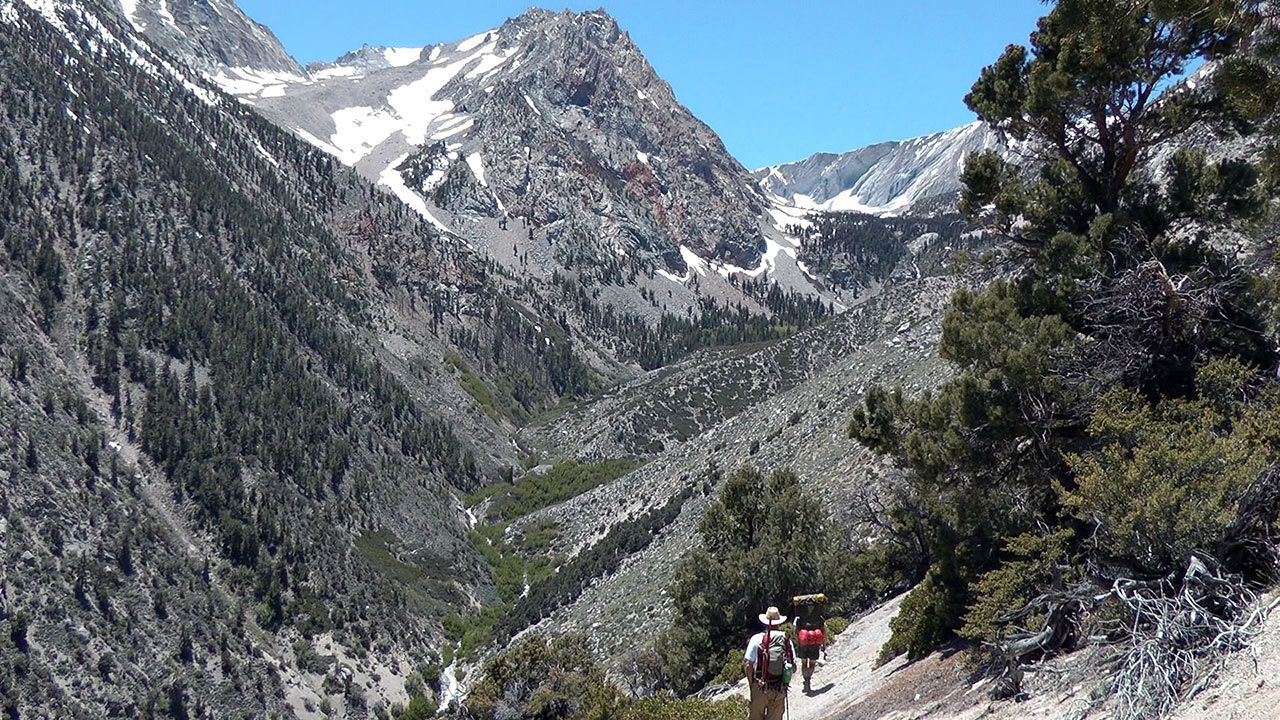 This past weekend I and two friends made a go at Williamson via the big-big West Face/Shepherd Pass route. We made it as far as Anvil camp, but had to turn back the following day when AMS took out one of my companions overnight.

While I was disappointed at not getting a shot at the summit (it would have been my third time up there), I've been struggling the past week or so with a mysterious but painful stomach ailment, so turning back was probably the smart choice for me as well. Maybe a winter's worth of drinking untreated snow/water has finally caught up with me.

Conditions on the Shepherd Pass trail were very much typical for this time of year following a strong winter: dry all the way the Anvil Camp, with snow appearing at that level, and the usual snow gear required or at least strongly recommended on the headwall and west face sections. As usual, I cursed the trail designer going both ways up (and down and up) Symmes Saddle.

That really is a painful approach, which is probably the only reason I don't hike up the area more often!

Same thing with me last week at Whitney. So bummed to turn back, but when you can't quite see straight because the headache is pounding so bad it is best to turn back.

Yeah, pretty much sucked. I've struggled with AMS for as long as I can remember, even as a kid. Any time I exert myself at altitude and sleep over 9-10K' it hits pretty hard. And I live at 3.5K, so it's not like this was some huge elevation climb. :P

Andy suggested it might be due to my breathing rhythm slowing down when I fall asleep, causing hypoxia, which I hadn't really thought of before. I've always assumed it was simply a function of over-exerting myself. However I took it pretty slow and easy on the climb up and felt fine before bed. 'Really couldn't have done much more - I don't think my pulse got over ~120 the whole day. But I still 'woke up a couple hours later with a splitting headache and went downhill from there.

interesting - one of my main partners and I have both been having (grim) GI distress for the last few months, and this was the first season where both he and I just went for it and did away with the water filter.

We exercised good judgment, but still... maybe a bad year for bacteria and protozoa in the Sierra?