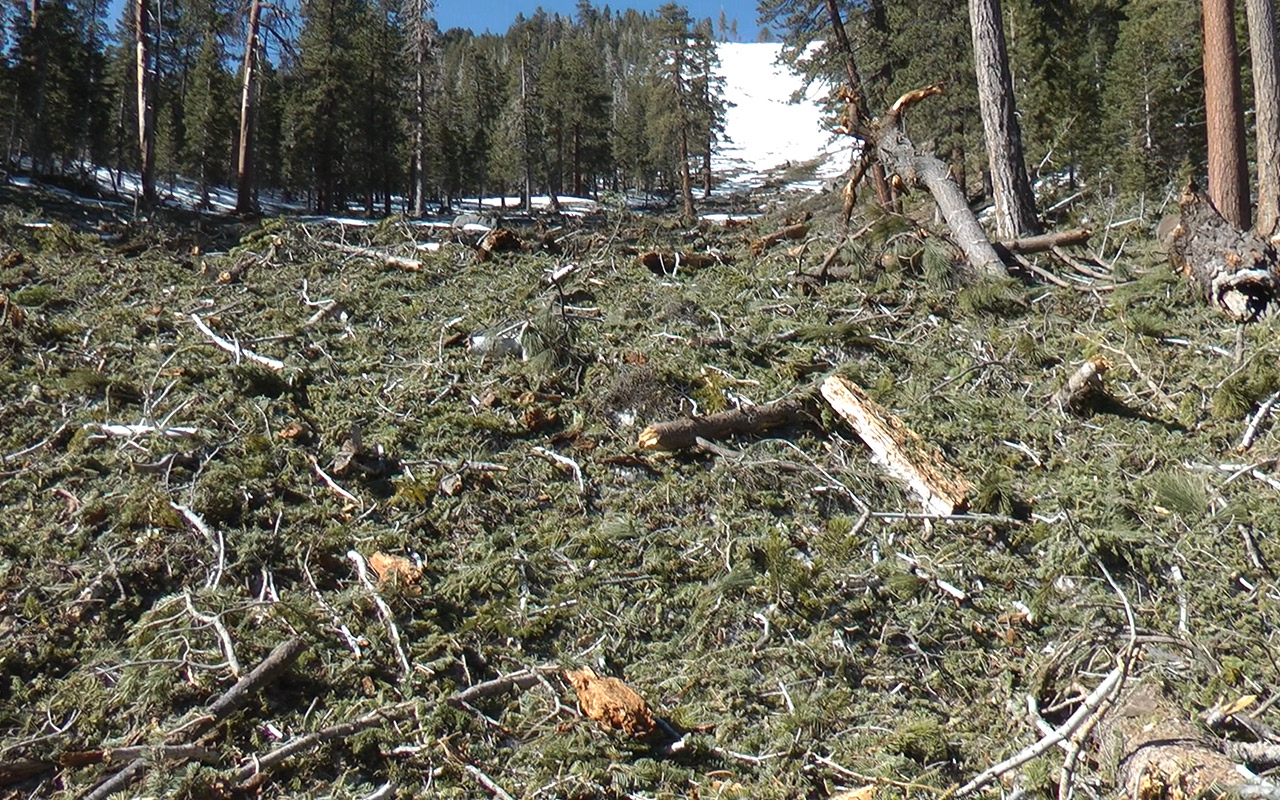 Sometime during the '09-10 winter, a large avalanche took place on Alto-Diablo Peak's northeast aspect, wiping out a portion of the South Fork Trail. When my partner Al and I saw the remains of the slide that April, toward the end of the season, it was obvious it had happened months earlier.

But that doesn't mean we weren't spooked by it.

Generally speaking, when an avalanche obliterates a hiking trail, you know something unusual has happened. Trees—and especially mature trees—provide a sort of natural statistical chart indicating avalanche intensity, path, and frequency. This is obviously valuable information, but as the photo demonstrates, avalanches also have the ability to go "off the chart." These would be avalanches that only happen every fifty or hundred years or so, which consequently destroy large numbers of fully grown trees.

The alarming thing about these slides, in addition to the ferocity of the damage they cause, is that they tend to reveal a much larger area of threat than even an experienced observer would suspect. That was especially true of the South Fork slide. The only visible avalanche terrain was the small hill due south of the trail—a hill that did not nearly appear capable of producing an avalanche of this magnitude (it is possible the start zone was actually much higher, largely hidden from view on the mountain's upper shoulder).

So how is a reasonably cautious backcountry traveler supposed to avoid these rare-but-deadly slides?

There are no easy answers. It is worth mentioning that the only sure-fire strategy is to stay home. In particular, unusual slides happen in unusual conditions. The occurrence of a historic storm, for example, is like a letter from Ma Nature herself telling you to stay away from avalanche terrain. Indeed, our guess is that the South Fork slide happened either during the massive snowfall of Jan 19, 2010, or perhaps during the second giant storm event that came a few weeks later.

Slides of this magnitude also demonstrate the importance of proper route planning. It's not always obvious in the field that you're in danger. Here, on the South Fork trail, we appeared to be traveling through a forest on low-angle terrain with no nearby aspects of concern—but you can see how wrong that impression was! Scout your route beforehand in Google Earth to sniff out these unseen dangers.

Finally, remember always that avalanche education is a never-ending process. If you haven't taken a class, start now with a level I course. If you've taken a level I, take a level II. And if you've taken all the classes you can, take another from a different teacher—or offer to help teach a class yourself (SMG offers the full AIARE series).

Re: huge slides like this in San Gabriels or San Bernardinos, due to the latitude and proximity to the coast, it generally doesn't stay cold long and I would expect, just as it is in most of the Sierra, that the type of slab that could cause this wouldn't persist for long. Thus, I suppose, the moral is... if there's an epic storm with epic avy danger, go surfing for a day or two and it'll be cool?

That was unreal, always wondered about mass dumpage on those super steep slopes.Spend alot of backcountry in the San Jacintos so was thinking about a winter accent on Tahquitz any cool stories?

We were looking at Tahquitz when we skied Jean Pean last year after the big storm. I think access is from the south, but I've never been up that way. Will have to do some exploring this season if weather cooperates...