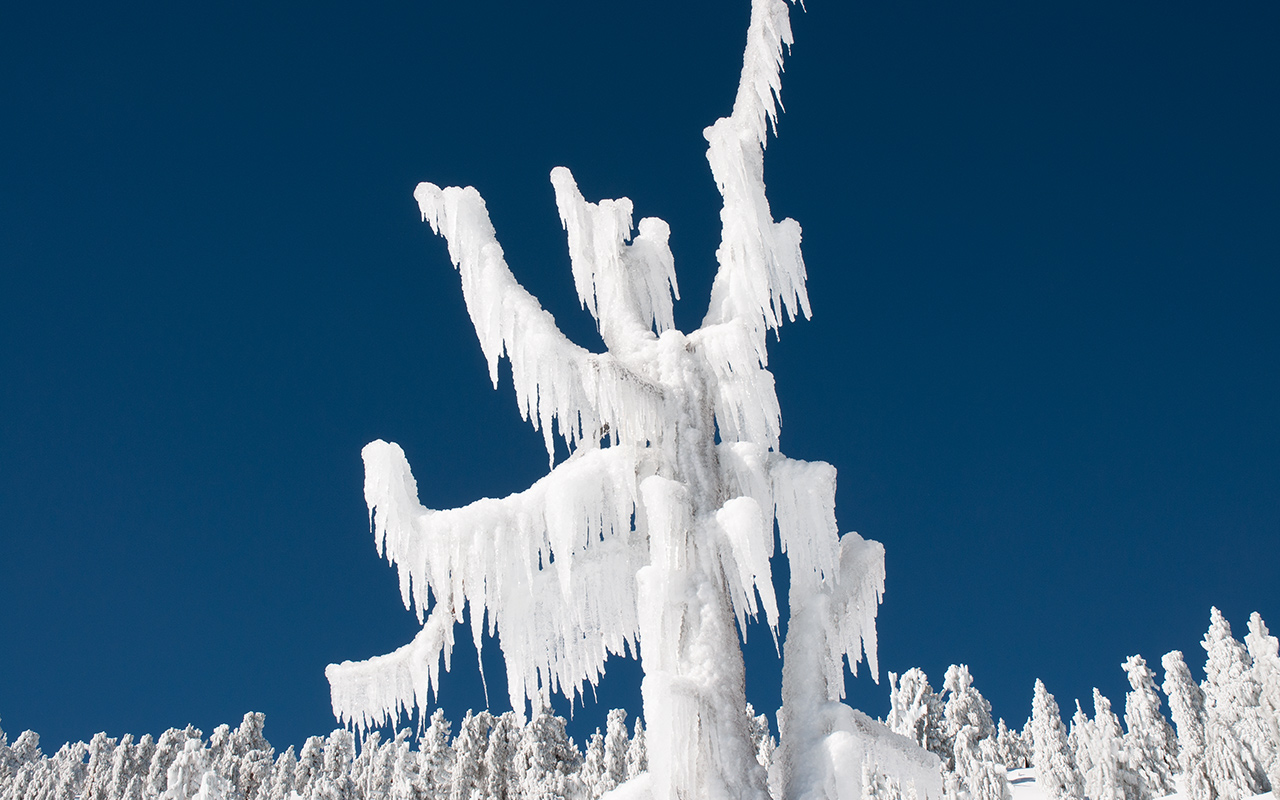 Here's a slide show of my trip up San Jacinto Peak on Thursday. Speedster Brent and I went up the tram and then up the east face. Snowfall totals and icing were eye-popping higher up the mountain.

Around Mountain Station and the ranger house, there was still probably a solid 2-3 feet of snow. The day was incredibly warm and windless. Snow turned gloppy as soon as the sun hit it, so skiing was on the challenging side. Amazing summit views, though, thanks to the clear air.

Standing on top of San J and looking down the north face reminded me that Snow Creek is simply one of the most magnificent big mountain routes in North America. Just don't get caught trying to climb or ski it! We went with the much easier (and legal) East Face descent. Note that rime on the summit boulders made it possible to ski directly off the true apex of San Jacinto—a rarity. Enjoy!

Would you be will to put a map up of this route? For all the people who tell me it's obvious, it wasn't to me when I was up there and the Ranger gave me advice that could best be described as anti-beta. I finally realized he'd never been to the summit in the winter....

We had a lovely day skiing, met a bunch of Boy Scouts and lunched in an abandoned winter camp complete with igloo, but failed at our summit.

Interestingly enough, San J is the one summit where I consistently get lost. Brent and I blew our approach route last Thur in broad daylight, and between the two of us, we've been up there a lot.

The best way to get there is to first study the area in Goggle Earth so you understand what it looks like. Your goal is to get your permit at the ranger station and then head almost exactly due west, following the gully beneath Cornell Peak and then ascending the flanks of Miller Peak, veering slightly south to avoid Miller's summit.

That's the goal, at least. But it's so easy to get lost in the many identical gullies and veer to far south instead. I guess carrying a compass wouldn't kill you. Inevitably you'll end up following one of the many boot packs, which may or may not get you where you want to go.

Hey, it is supposed to be a little bit of an adventure, right? :)

Too funny. This is exactly what I proposed to the Ranger who guaranteed me it would result in certain death. Guess I'll have to go back and try again.

Great photos! was on Jean Pk./ Marion mt. Yesterday and found okay 30-35 degree turns. With these warm upthrust patterns don't now If we'll see Snow Creek filled in. New to the area and still dreaming of skiing it!

Live in OC and looking for people to hit the backcountry San G or San J this winter.

Anyone need another person to hit the trails with?