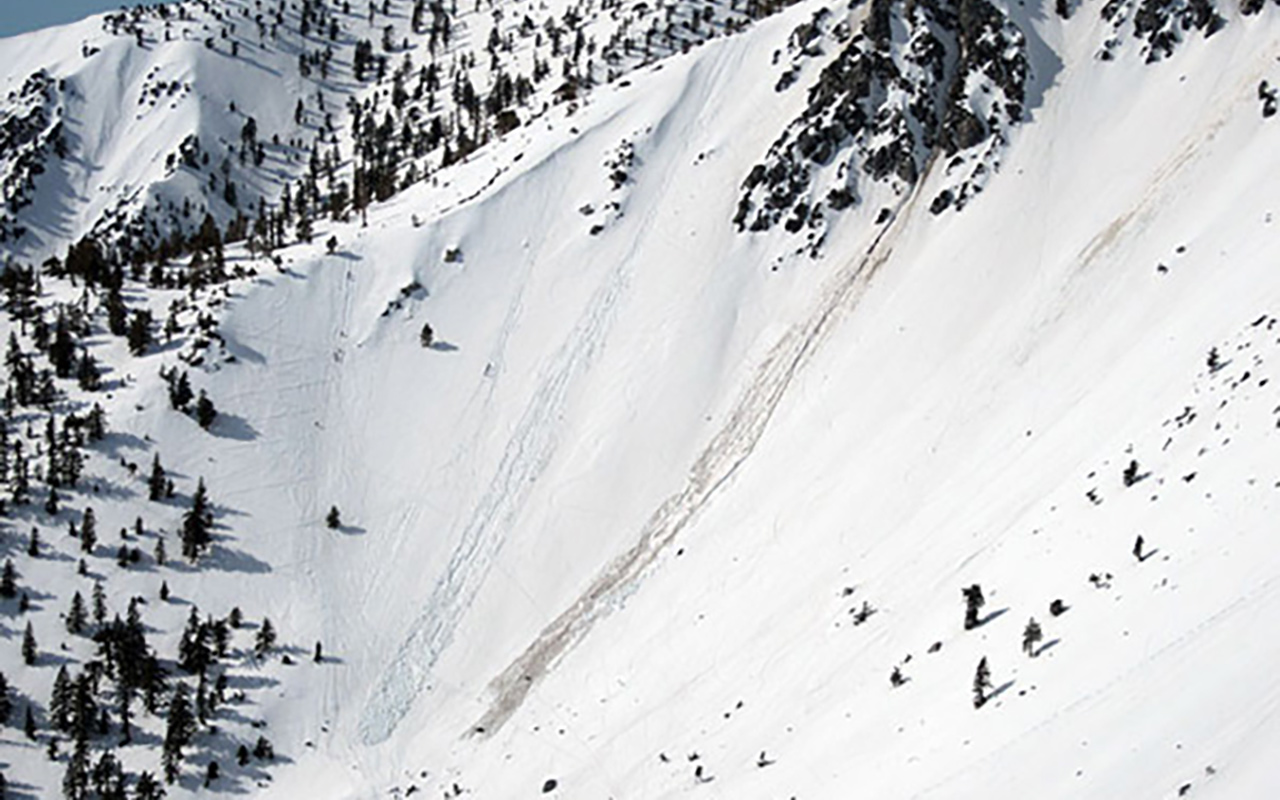 One of the interesting things about Baldy Bowl (via the Ski Hut Trail) is that it's a high use area that isn't particularly safe. On any given weekend you'll find a steady stream of hikers and/or climbers going up the bowl, regardless of current conditions. Perhaps that's an indicator that climbing in general isn't nearly as dangerous as some of us think it is.

Or maybe it's evidence that we're all a lot luckier (mostly) than we realize. In any case, here's great evidence that Baldy Bowl is not in fact a child-safe playground. I took this photo around 11:38 Sunday morning, from just off Mount Harwood's summit. Little did I know, that left slide had actually occurred only minutes earlier, nearly catching a pair of climbers heading up the bowl.

When I saw the slides, I thought, well, those look pretty big.

And then I kind of forgot about it. In truth, I expect to see a lot of motion in Baldy Bowl whenever it gets sunny and warm. The San Gabriels are in SoCal, after all, and snow exists here in a perpetual and one-sided battle with the sun. You can't see it in the photo, but the right slide includes some pretty impressive rocks. Rockfall is endemic to Baldy Bowl whenever the sun is shining. And, in addition to large wet slides, cold slab avalanches can and do occur in the bowl following storms, typically off the ridge line, a NE aspect that wind loads.

This would probably be a good time to mention that, coincidentally, I learned today that Jeff Pierce is teaching a Level I Avalanche Course in Southern California. I'd say that would be an excellent place to start if you want to learn more about the SoCal snowpack, as well as traveling safely in the San Gabriels.

Things aren't freezing out there right now at night. Be Careful!

Some parents had two or three of their kids out there climbing up through the debris.

Kind of a shocker after being a Tahoe skier for the last ten years.

I have a bunch of photos I need to put up on my shell of a blog, but I've been lazy. Probably why it's a shell. :-)

I just enlarged my photos and you can, in fact, see my tracks.

I skied the girly man chute sat morning. Dropped in around 9am and was sure glad i wasn't much later due to the high temps. Although I thought the chance of setting off a wet slide was minimal, my secondary concern was for the 2 mountaineers who were ascending the gully directly below me.
On a big warm weekend a situation like this could be potentially catastrophic as this safety in numbers approach doesn't favor anybody in an avalanche.

Trevor, you were smart to get up there early. I was surprised how soft things were at 11am, given that it's January.

As I was hiking down below the hut I was really tempted to tell traveler I saw ascending that it's all over up there. Lot's of mountaineers asking me "is it icy?" and I'd reply by sticking my pole in the snow and say "no, it's slushy!" hoping they'd be able to figure it out for themselves.