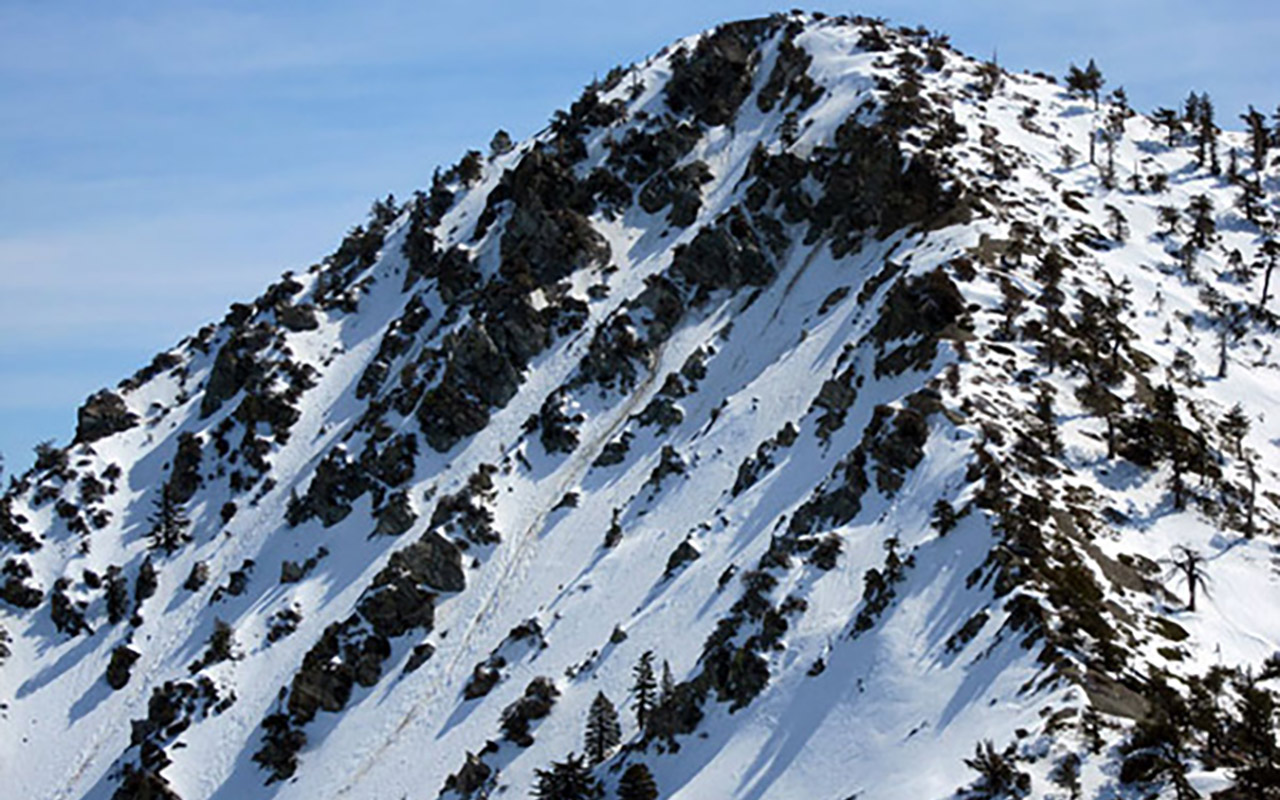 Just taking a look at Telegraph Peak's north face in the San Gabriels this past Saturday. I've got an '04 or '05 photo showing this same view of Telegraph taken May 15, with huge coverage, which always makes for a good point of comparison.

How does this year stack up?

Pretty marginal, though coverage in general in the San Gabriel Mountains does get a whole lot better when you climb up above 9K or so. Still, at this level of coverage, I'm not feeling any great temptation to jump into any of these chutes anytime soon.

We have reasonable coverage this year, but in thinking back about all my skiing in the SGs this season the snow is generally terrible. Ice in the shade, wet sloppy sticky in the sun, windboard on north aspects. On top of that the crazy mix of hot and cold storms has given us slides galore. I'm almost ready to call it quits down here completely and see how the eastern Sierra is doing.

The season has definitely rewarded picking the right spot at the right time. But it's definitely time to start looking northward...

I've heard great reports of skiing immediately after storms, but my SOP has been "wait until the next weekend to let the snow settle and natural slides go before venturing into the BC". With some of the slide evidence I've seen this year, I haven't been keen on changing that, even though it's not rewarded me in the snow quality department.

Do you mean some of the high-profile wet slides this year, or did you see significant cold slab activity?

Very early year Baldy Bowl looked like it had some big slides which put me off of BC for a while and I missed all the wet slide action. On Baden Powell this weekend the gully I skied out of was absolutely filled with slab debris from both sides of the ravine, big slides from the tops of the ridges. It was really strange, because the gullies to the left and right of this one had no slide debris at all despite being close to the same aspect (pretty much due north). I'm still scratching my head on that one.

I noticed this Sun that the bowl had released another wet slide in the same location similar to the high profile one back in Jan. I figure this happened Sat afternoon but wasn't much worried about as I was up there early....and lookin to ski Shitzos off the main summit.
The most recent snow up there is already heavily consolidated while the old stuff (about a foot below) is solid ice.
The chute was nice and soft and I enjoyed 1500' of great corn down to the hut.
Spring rules apply here year round for me as this place appears to be going through a melt/freeze all winter.....go early and lookout for rockfall!

I didn't measure it when I was in there, probably should have. Looking at a topo in retrospect, it isn't steeper (at last at that resolution) than the gullies to either side. Could be there are concavities on the ridge that just don't show up on topo, could have been wind-loading on that ridge (the aspect is due N, while the gullies to either side are slightly NE and NW).

Here are links to the GPS track (in .gpx and .kml), if you can figure it out let me know. In any case, avoid the ravine I descended because there's a frozen waterfall in the middle of the descent. No such problem to the east.
http://db.tt/ukl0vuN
http://db.tt/Z37754D

Scott...the old snow surface prior to the most recent cold storm activity would be a great bed surface for such a new snow slide. I found solid ice on southern aspects.
Assuming they were recent.....did you happen to poke around the bed surface?

The debris wasn't filled in with snow at all so I believe it was since this last storm. The bed surfaces were not ice. Firm snow, but I didn't do any tests on it other than ski it.

Baden Powell's north side is one of the very few spots in SoCal where I've heard of true slab avalanche activity on anything approaching a regular basis. Couple of factors are involved, probably including orto lift (t-storms) when the weather hits. If I'm up there this coming weekend, I'll look around for a crown fracture and take some photos if I see anything.

I was up there last friday and rode one of the northeast gullies off of Baden Powell. I saw lots of evidence of significant point release wet slides that led to some big chunks but no crowns indicating propagation of slabs. Also, from what I could see, all three gullies had activity but the more north and east facing aspects of each had more activity than the south and west aspects.

My best theory for the variation is that there was still some relatively unconsolidated and low density snow on north and east aspects early last week while the s and w had consolidated more fully. Then we had the high altitude rain event tuesday night and wednesday followed by rapid warming thursday and friday. So we had rapid loading of this top layer and weakening bonds due to warming and water, leading to lots of wet slides.