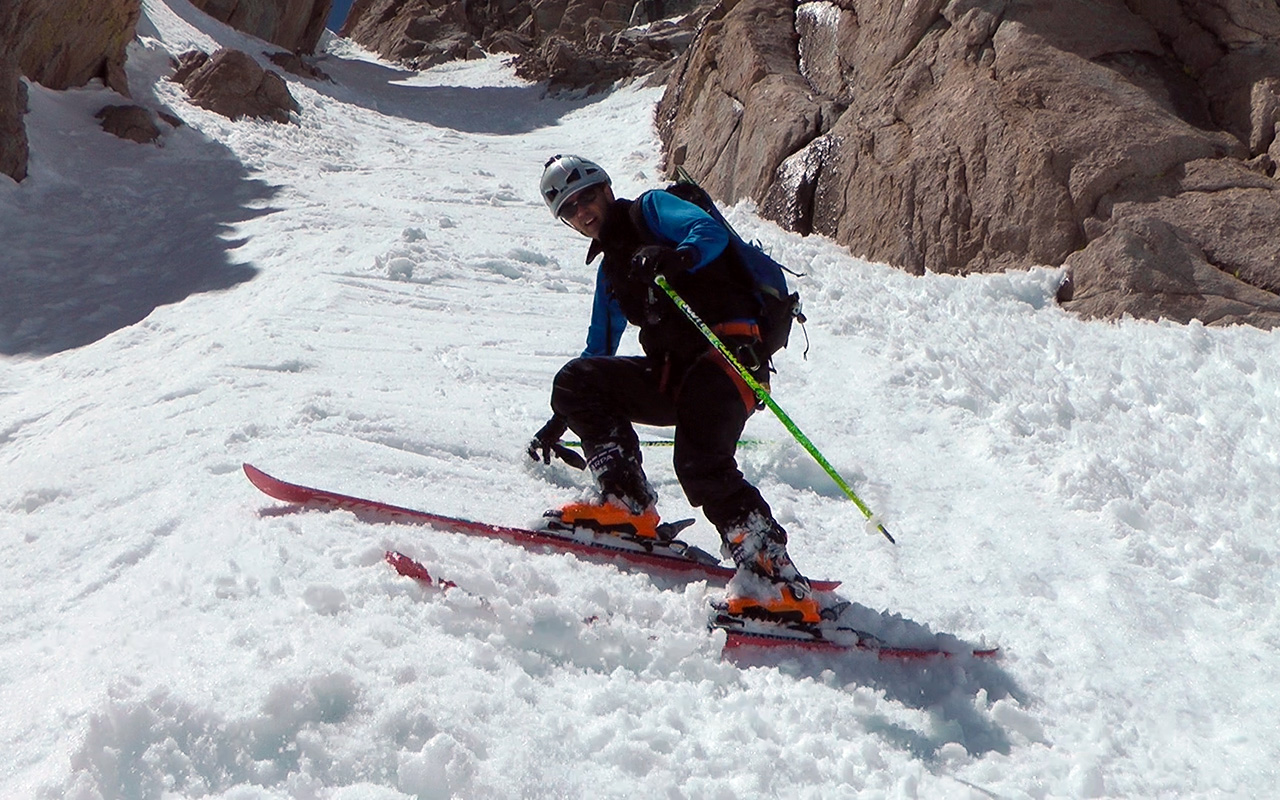 One of the things I love about ski mountaineering is that there's always something new to learn. Over the course of this season I've been trying to improve my steep skiing technique, sparked in part by studying last season's C2N footage. The video revealed I was using a bit of a stem to initiate my steep turns. I wanted to see if I could eliminate the stem to produce a more reliable turn.

It's important to realize there is a specific technique for making effective turns on high angles, and it was developed by those wacky French extremists, including Patrick Vallencant and Anslem Baud, way back in the 1970's, as a means to cope with what was then (and, heck, still is now) steep skiing at the very edge of possibility. That technique, sometimes called the 'Pedal Turn', remains the state-of-the-art way to ski a controlled descent on super-steep terrain (yes, modern skiers have developed an alternative technique, but it eliminates the often-critical option of being able to stop).

I say every expert should learn the basis of the French technique, because (1) it is marvelously effective and (2) it is a heck of a lot of fun—even if you only use it on short steep inbounds pitches. The goal of the technique is to make a controlled turn from a standstill to a complete stop in the smallest amount of space possible, using the least amount of energy possible.

UPDATE: As of April 2013 I now think what follows is wrong, or at least, ineffective on pitches greater than 40° or so. For my current thinking on steep technique, see here instead.

Look at the photo above. Now imagine initiating the next turn by jumping straight up and trying to rotate the skis along a horizontal plane (intuitively, this is what inexperienced experts will try to do on steep pitches). First of all, notice how straight my lower leg is. The angle of the hill leaves me necessarily standing on a straight or nearly-so downhill leg. If I try to 'hop' off this leg, I have almost no ability to generate any spring, resulting in an inability to unweight my skis.

Now, say that I press on: though I've been able to only marginally generate any lift, I then rotate my skis horizontally, trying to get them pointed in the opposite direction. Naturally, the skis will 'catch' on the hill, leaving them pointed...straight down. By this point, my weight has probably shifted backward, so that I find myself on the heels of my skis, in the backseat, with the skis pointing straight down a 45° or steeper pitch. Not so good.

How did the French Extremists escape this dilemma? Via a clever paradigm shift. The key is to realize the turn must be initiated off the uphill leg. Baud actually lifts and steps back down on his uphill ski, using it (much like a pole plant) as a trigger. A perhaps simpler way to learn the turn is to simply transfer all your weight to your uphill leg and start experimenting making turns from there.

We will use a very slight extension of the uphill leg to create a little space in which to make the turn. A big jump up is not necessary—the angle of the hill allows us to simply move outward a little bit, creating all the room we need to turn the skis. By starting on the uphill ski, the turn's sequence of complex moves all seem to fall into place. It takes practice, to be sure, but in time, you'll start to find it becomes more and more automatic.

"...modern extremists have developed an alternative technique, but it eliminates the sometimes-critical option of being able to stop at will"

I chuckled at this. For the rest of us without that much adrenaline/testosterone/lack of survival instinct, you're spot on. "Steep" was incredible, I need to watch that again.

You're forgetting Sylvain Saudan as well. Check this video of his "summer training". I know deep down that what he's doing has to be miserable, but he sure makes it look like fun!

@Scott: good call out. That footage of him training on rocks has been stuck in my head ever since I saw his film in Telluride back in 1980-something (with our dear blog-master here, even :) )

Between the thick french accent and that awesome tag lag, "Sylvain Saudan - Skier of the Impossible!" has got to be one of my favorite extremists.