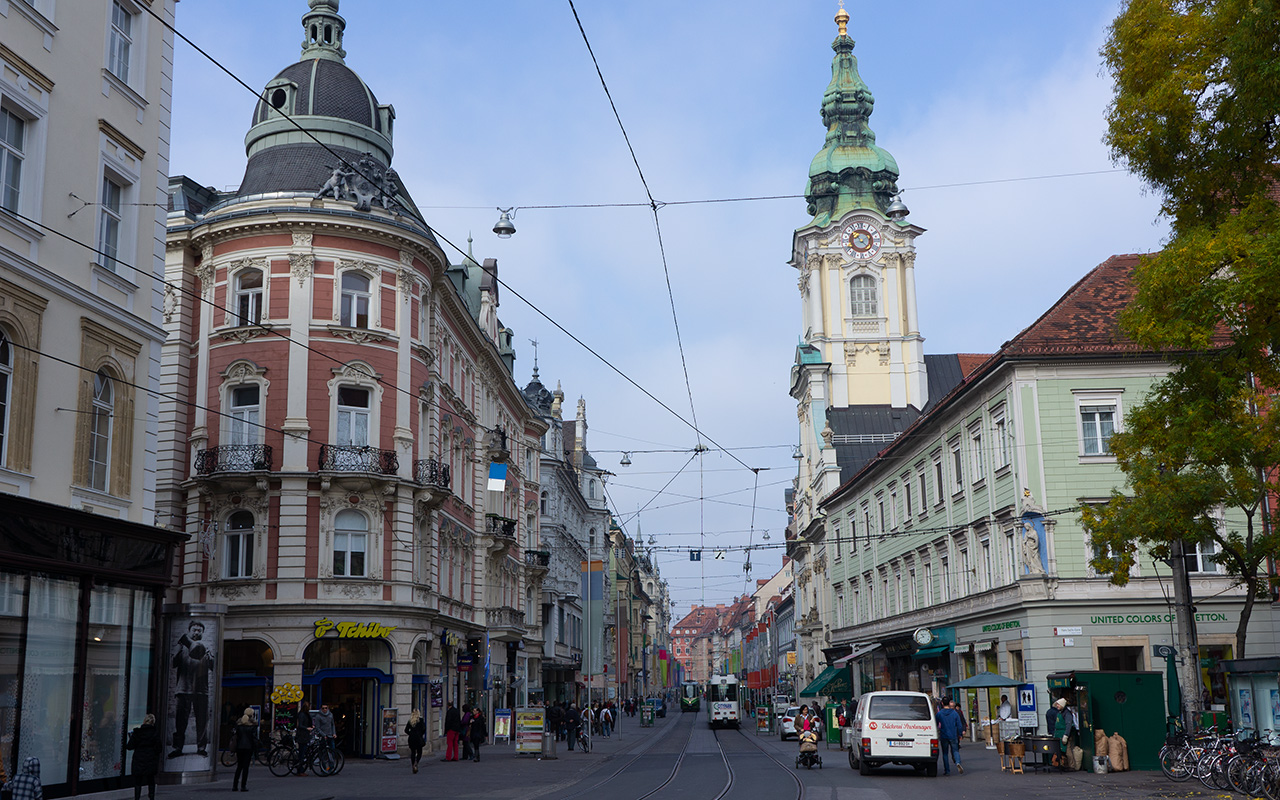 I had no idea I'd be going to Austria until about two weeks beforehand. Given more time, I might have tried to learn some rudimentary German, but instead I focused on other preparations. I thus arrived in Graz knowing roughly three German words, none of which I could pronounce correctly.

Most Europeans know at least a little English, and as you trend younger you find broad English fluency throughout the continent (as well as much of the world). Because of this, one of my friends once argued it really doesn't make any sense to try to learn another language; it's more efficient to just speak English. Yes, we Americans enjoy a unique privilege: the ability to travel almost anywhere in the world without bothering to learn anything about the place we're going.

This asymmetry exists for a number of reasons. For one, while English is a monstrously difficult language to master, it's also remarkably easy to learn. English is intelligible regardless of grammar, pronunciation, tense, and even word order, allowing anyone with a dictionary to string words together and get their meaning across—a perfect intermediary for people of different nationalities.

In addition to this structural advantage, for better or for worse global citizens are exposed from birth to a staggering dose of American pop culture, all of it—film, music, television, literature—in American English. When I was in Graz, of course, the TV shows were in German. But much of the music used as background in German TV commercials was in English.

So, as you'd expect, communication for me in Austria was a snap. Or was it?

One of the terrible things than happens when you speak your own language in someone else's country without even trying to speak theirs is, you realize you are being rude. Yes, I could walk into a restaurant or shop, mispronounce 'Guten Tag', and then proceed to attempt to establish in German that I spoke no German at all, but it seemed more efficient and much less absurd to just jump right to 'Hello', establishing immediately that I was an English speaker who was either unwilling or unable to speak anything else.

As a communication strategy, this worked fine, but as time wore on I became more and more self-conscious. Sure, I'm as rude as the next guy here at home, but when I'm traveling and I'm a guest, I do try to put on better manners to make a good impression. I hate being rude, or doing anything that could be construed as being rude or disrespectful. So I found myself becoming reluctant to say anything at all, preferring just to remain silent when people greeted me (perhaps I'd give them a nod of my head and rush off), which I realized was in itself an act of rudeness.

And when I did enter into conversations, something else happened: I noticed I was altering my speech to make my English less nuanced and thus easier for a non-native to understand. Inevitably, this led me to say things I didn't intend because (1) I was jet lagged and (2) I otherwise never talk this way (not even to my children). In one case, as I was trying to express congratulations to someone, I realized after the fact that what I had said to him could be construed as me telling him he had looked like a fool. I was mortified...

A funny thing happened when I discovered the maid at my hotel spoke no English: I found it easy to speak my three German words with her. The asymmetry between us was gone, replaced by a parity that allowed me to mangle her language guilt-free. This made me wonder if perhaps I should try greeting people in Spanish, which I speak not fluently but adequately. Buenos Dias, I could say. And in response to their inability to speak Spanish, I could then slyly switch to English, with an affected Spanish accent: No Hablas Espanol? Oh. Lo siento! Es possible you speak English? Bueno, we can talk like theese...

Obviously, that approach would have its own liabilities.

Probably the best solution is to just embrace the rudeness. Speak English, and over time you'll get over that awful sensation that you're insulting everyone. Yes, I realize it's entirely possible my discomfort was entirely one-sided. Maybe not a single person in Austria cared that I said 'hello' in English. But I cared. Perhaps it would have been better if I said 'hello' in both languages, signaling my attempt to speak their language, as well as the necessity of using my own.

Or maybe next time I'll actually try to learn a little German...

When I last visited Austria I made sure I could at least count to ten. This was most helpful in ordering a deli sandwich. Ein dis, ein dat....etc. Pretty comical actually, but it was enough. ;)

Thanks Dostie -- I just learned a new German word!

Having lived in European countries where I spoke the language (Germany) and where I absolutely did not (France), I can tell you that while you'll get by just fine there speaking English, knowing the native language (or even better, the local dialect) will get you info and open doors for you that are simply not there for tourists. Even speaking with an accent gives you a huge leg up because they'll assume you're a fellow European, provided you don't swallow your R's too badly (als ob du ein Kartoffel im Hals hast).