SIA Preview: Rocker for the Ladies 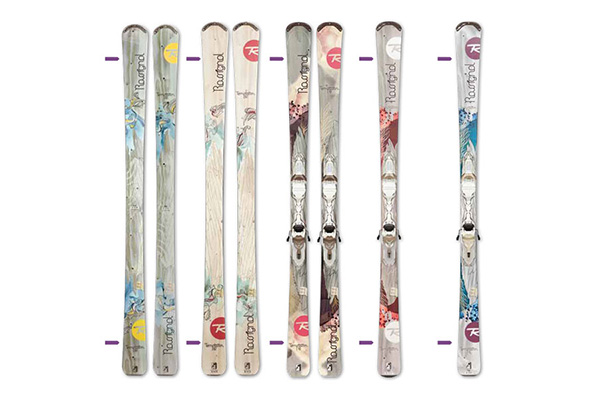 As rocker technology continues to evolve, we find it moving well beyond powder-only skis. In fact, rocker (in one form or another) is appearing throughout ski makers' 2012-2013 lineups. While rocker certainly brings advantages to nearly all categories of skiers, I believe rocker may prove to be of great benefit to one group in particular: women.

Take a look at Rossignol's 2013 Temptation line (I believe these are also currently available in 2012 versions). The arrows on the image indicate locations of tip and tail rocker, with the rest of the ski being traditionally cambered. Now, we already know this is going to reduce hooking in the tips and tails, making turn initiation much easier for beginning and intermediate-level skiers (for that matter, experts will it easier to initiate turns also).

But what else is caused by traditional skis' tendency to hook and grab in the tail? How about ACL injuries? And what group is most vulnerable to ACL tears? That would be women. Now, I am speculating here—I don't have data or hard evidence suggesting rocker is going to reduce knee injury incidence. But I have to say, I think this could prove to be an unexpected and huge benefit of Frontside-category ski rocker.

Just to be clear, what is important here is tail rocker. An early-rise tip will improve turn initiation, but otherwise not impact the tendency of a ski's tail to grab when the skier's weight shifts rearward. So we are specifically interested in carving skis with both tip and tail rocker (I believe Rossignol calls this "AutoTune" rocker).

You can wait to see how the data plays out over time, or you can do what I'm going to do, which is put my wife on one of these skis ASAP to watch how it impacts her turn mechanics. At the very least, it should considerably ease her ability to initiate and escape turns. And if it also comes with a reduction in the so-called "Phantom Foot" ACL tear risk...well, wouldn't that be something?

I'm confused about how a rocker tail would be fundamentally different than just a shorter tail, especially on hardpack. And even on pow, it still seems to me like it would be that big a difference.

Scott, rocker tends to interact with terrain/snow in ways both obvious and subtle. You have to think in 3-dimensional geometry, including the angle of edging involved, which can vary by degree.

The very quick answer is, if you just cut off a ski's tail, there's never anything there to interact with the snow, whereas with some degree of rocker, in different situations, different amounts of ski are placed in contact with the ground...

De-tune the tips and tails = rocker effect. No "grabby" tips and tails for the skier who can't handle torsional stiffness. And you don't have to buy a new pair of skis to get it.