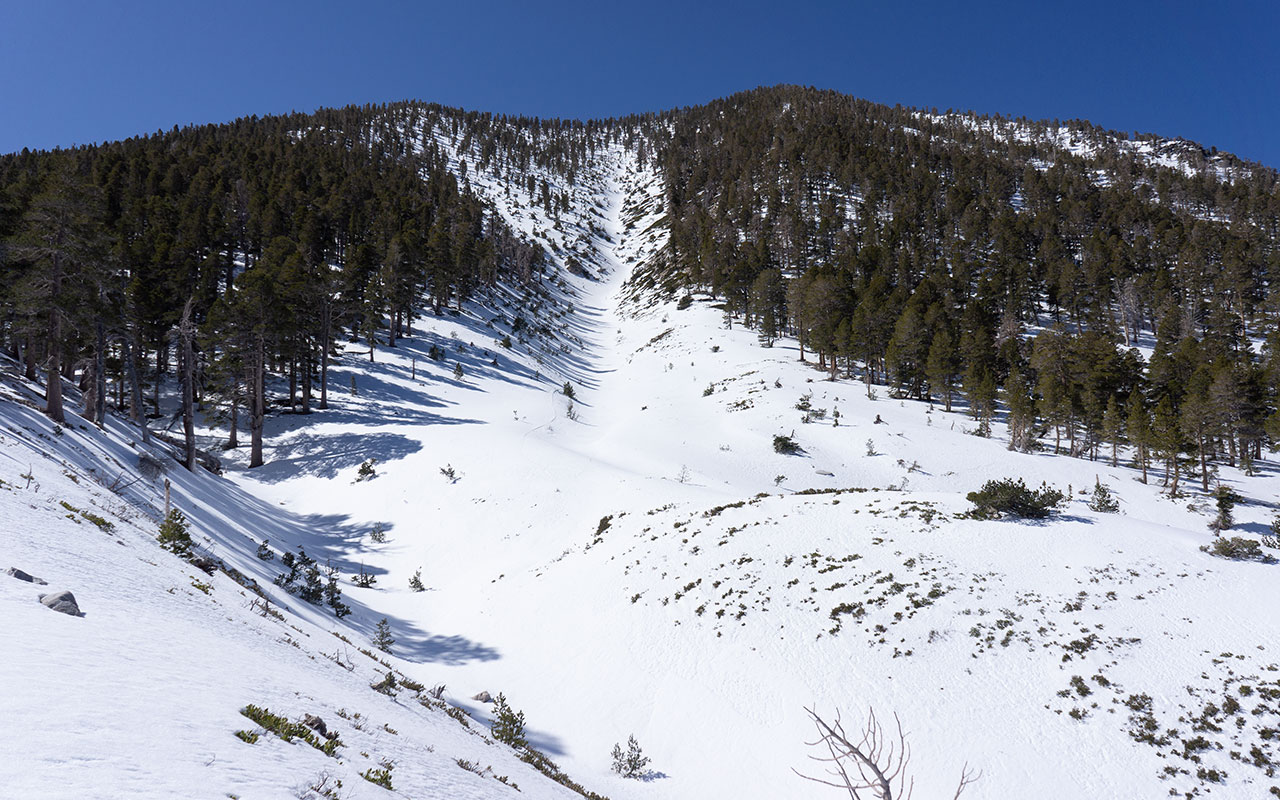 Good news here is that I finally blew the dust off my Dynafits. Bad news is conditions weren't very amenable to skiing. Trevor and I hiked up the San Bernardino Wilderness' South Fork Trail to look for snow, and—surprise!—we found it. There was quite a bit more snow than I was expecting, in fact, with at least decent coverage on wind-protected north aspects above 9000' or so.

And now for the bad news... Yes, I expect challenging conditions whenever I ski in Southern California, but in truth I could do absolutely nothing with the snow yesterday. It skied like a nasty breakable crust, only without the crust part. Variable conditions and pervasively unconsolidated snow prevailed on North and East aspects, with total snowpack depth around 2-3 feet.

Is there loose, faceted snow lurking around ground level? Absolutely—so watch for wet slab hazard on a variety of aspects, particularly including east-facing slopes in the vicinity of 10500'.

Higher up, in the big cirque below San Gorgonio and Jepson Peaks, we saw snowpack remnants that have just been murderized by the wind. Picture mostly bare ridges and spines, with occasional patches of snow in gullies and bowls that is wind-texturized and sculpted about 200% beyond the point of skiability.

Will anything season into better skiing as spring advances? Odds don't seem too favorable. Coverage was ok on Charlton Peak's north gully, but it is thin and unconsolidated. The problem is the snow may well just melt off before becoming solid (and stable) enough for good skiing. Surely something will remain as we get closer to April...but it is a long haul to get back there for just a few patches of snow.

I was up there Saturday. I'm glad I wasn't the only one challenged by the conditions. I was seriously questioning my skiing abilities after the third face plant. I made it down from the trees on the left of your photo using some ugly survival skiing techniques. I don't know what hurt more, my knees or ego.

It really was abominable, wasn't it? :)

I haven't even scraped the summer storage wax off my backcountry skis yet. Given this, I think I'll just save myself the trouble and hope for a better season next year. Thanks for the beta, hope your skis are still usable and/or weren't new!