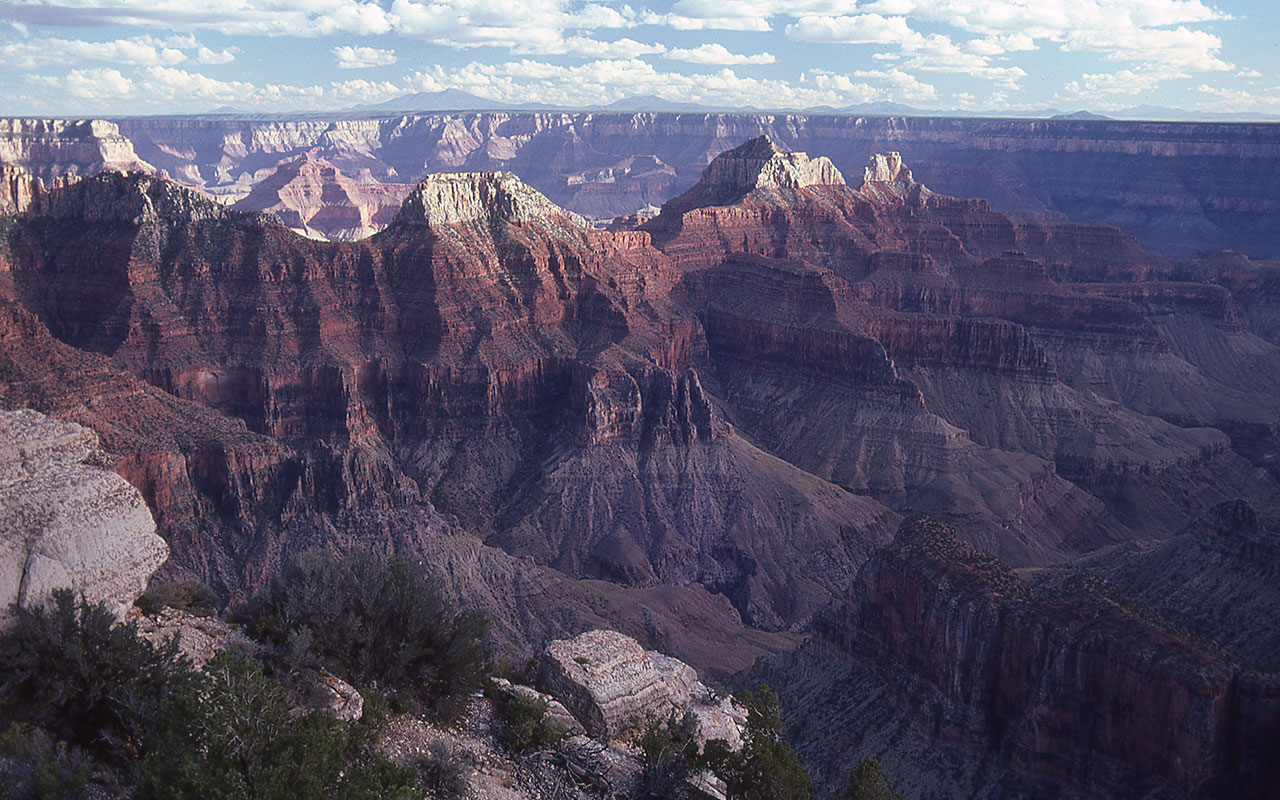 I've been scanning some of my dad's old Kodachrome slides of the Grand Canyon, and this shot in particular caught my eye. Here we see the south rim, as seen from Bright Angel Point on the north rim, taken in September 1978. Easily visible are the San Francisco Peaks, Arizona's highest point, and Kendrik Peak, both near Flagstaff Arizona. In a straight line, Google Earth measures this distance as 64 miles.

I almost find myself at a loss for words to describe what this image is showing. On a typical (present) day at Bright Angel Point, the Peaks will be visible as an indistinct outline on a distant, hazy horizon. Often, in summer and fall, they won't be visible at all. Unfortunately I don't have a directly comparable 2012 image, but you can easily see a collection of representative shots by searching for images tagged "Grand Canyon Bright Angel Point".

Of course, you can also visit the north rim to see for yourself how the horizon looks today. And then remember this look and think about how much we've changed our world in three short decades. In my dad's shot, we can clearly see topographic detail on the San Francisco Peaks. We can see timberline, the green of the pine forest, the yellow of aspen trees. If you didn't know better, you'd think the Peaks were sitting right on the edge of the South Rim—that's how close the mountain looks!

Browsing through my dad's slide collection, taken throughout Northern Arizona in the late 70's, what strikes me over and over again is the piercingly clear quality of the air. There's simply no haze—it's as if my dad was shooting in a vacuum. I thought I knew what a clear day looks like, but my dad's 1978 photography in an instant demolishes that delusion, and I am forced to admit I have no memory of what truly clear air was actually like.

Back then LA's air was frequently intolerable. I believe urban air (USA anyways) is demonstrably better now. I went to Durango in March 2008 and saw similar views on the way back (returned ?ia 4 corners and the park). Maybe he just caught it on a reaLy clear day?

Growing up in Bishop it isn't so much air quality changes that I notice, but retreat of the small glaciers that still cling to the highest peaks in the Sierra. Watching these small glaciers clinging to life but steadily shrinking over the years is one of the clearest examples of climate change I can think of.

Andy,
You can thank the coal powered, Navajo Generating Station for that loss of visibility. It is located near Page, AZ only 25 km from the Grand Canyon. It came online in 1976 and now produces more than 20,000,000 tons of airborne emissions anually. No wonder why Edward Abbey wanted to Monkeywrench the project! Your dad's picture is perfect evidence of the some of the costs of burning coal.