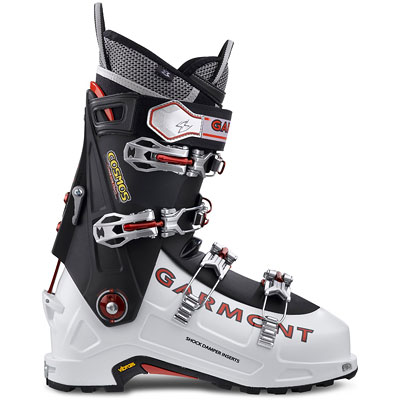 Okay, deep breath. First of all, kudos to Lou for breaking this story. Go read what he has to say, and then come back for my thoughts. Good? Good. And now, for my take: sh*t! I wasn't able to run Lou's test on the pre-production Cosmos that I skied last winter because I'd already returned them. But my own, brand-new pair arrived today, and I can confirm I'm seeing exactly the same behavior Lou describes.

In fact, I wasn't even able to get my Cosmos to release from my Dynafit bindings. The force required to pop the boot free seemed to be getting dangerously close to damaging my bindings, so I stopped trying. Needless to say, compared to the far easier and smoother release of my Maestrale boots, this is an alarming discovery.

As Lou has noted, the lack of a brand-agnostic standard for tech-binding systems opens the door to considerable variations whenever manufacturers choose to eschew Dynafit-licensing. That seems to be exactly what has happened with Garmont's 2013 Cosmos. Even a cursory comparison to the real thing (ala my Scarpa Maestrales) reveals that the Cosmos' tech inserts are shaped quite differently.

Unlike 'official' Dynafit tech inserts, the Cosmos' are deeper and less tapered, with a sharper, steeper, angular edge. These topographic differences inarguably alter the retention and release characteristics of my Dynafit TLT vertical's toe unit, and least in comparison to my Scarpa Maestra boots. What is not clear is how relevant this difference is to real-world performance and safety. What is clear, however, is that they are different.

Garmont has just sent Lou an official response, in which Garmont's president asserts that tech system binding release values depend primarily on boot-heel construction and shell material, not the toe insert, and that in any case, during product development, Garmont extensively tested and was satisfied with the retention and release performance of the Cosmos' "Garmont Tech" inserts.

Lou has posted a short response to Garmont's statement, which you should read.

Unfortunately, I am not a Dynafit engineer, so I am not in an ideal position to make definitive comments about this issue, but I will note that Garmont's statement seems to categorically reject any possibility that something might have gone wrong between the development process, when their tests were conducted, and manufacturing of the current run. That strikes me as premature.

We should also be honest in admitting that tech-system bindings do not offer the same release and retention safety that a well-adjusted Alpine binding offers. I have long argued that skiers who take a lot of falls should probably not be riding on Dynafit or other 'tech' bindings. I have also argued that skiers should probably not ride Dynafit or other tech bindings extensively in-bounds—certainly not as their primary in-bounds rig.

That said, when I do ride a Dynafit or tech rig, I have the expectation that the binding and boot are working as Dynafit intended. It is difficult to believe that the very visible geometric differences in Garmont's tech inserts have no adverse effect on tech system binding performance. It is difficult to believe that the significant difference in force required to release the toe of the binding and the lack of re-centering behavior, as seen in Lou's test, has no effect on safety.

Nonetheless, it is possible everything Lou observed is actually irrelevant to real-world release and retention performance. That doesn't seem likely to me, but I frankly don't know enough about the workings of a tech binding to say for sure one way or the other. In any case, Garmont has made its position clear: the inserts are working as intended.

Unless Dynafit or Scott USA decide to weigh in, that leaves the final word on this subject up to you.

Note: my original review of the Cosmos is here.

My production pair are having the same issue. This must be a major bummer for Garmont/Scott. The only way to replace those fittings, that I know of, is to replace the entire shoe section of the boot, ouch! Is there a cheaper way perhaps? Maybe they can machine them to a different shape but it better be computer controlled. BTW I also have some Mercury and Vulcan boots I'm trying out this week. The fit isn't far off from the Cosmos and they are much stiffer.

It's hard to believe that there is such a radical design departure on these inserts. After watching the video and seeing the design of the cosmo insert it seems fairly obvious that the harsh release is from the design. I'm not sure to what extent the smooth flex of the dynafit system actually plays a role while skiing but the higher release values sure are a bit unnerving:o
Sure glad I don't have to make that decision but bring them on up this weekend and we'll do some release tests.

Another issue with the Cosmos is the 2 lower buckles over the instep (cuff buckles). They have a plastic extender that is very frail. I busted one stowing them after skiing. I may have had some ice in the teeth of the ladder and the plastic was very cold but I was astounded when it just snapped. It isn't like I was using my "kung foo grip" to close the buckle. I didn't even have my foot in the boot. I was just buckling them up after taking them off.

Turns out there is only about .5 cm of plastic at the point of attachment to the buckle. If this part were made of aluminum, I don't think this would be an issue. As is, these buckles are extremely delicate. They are astoundingly easy to break.

Too bad because I love these boots. Amazingly light, good performance downhill and they seem pretty comfortable (I haven't broken them in yet). I think if next year Garmont replaces the plastic buckle components w/ metal this problem will be resolved.