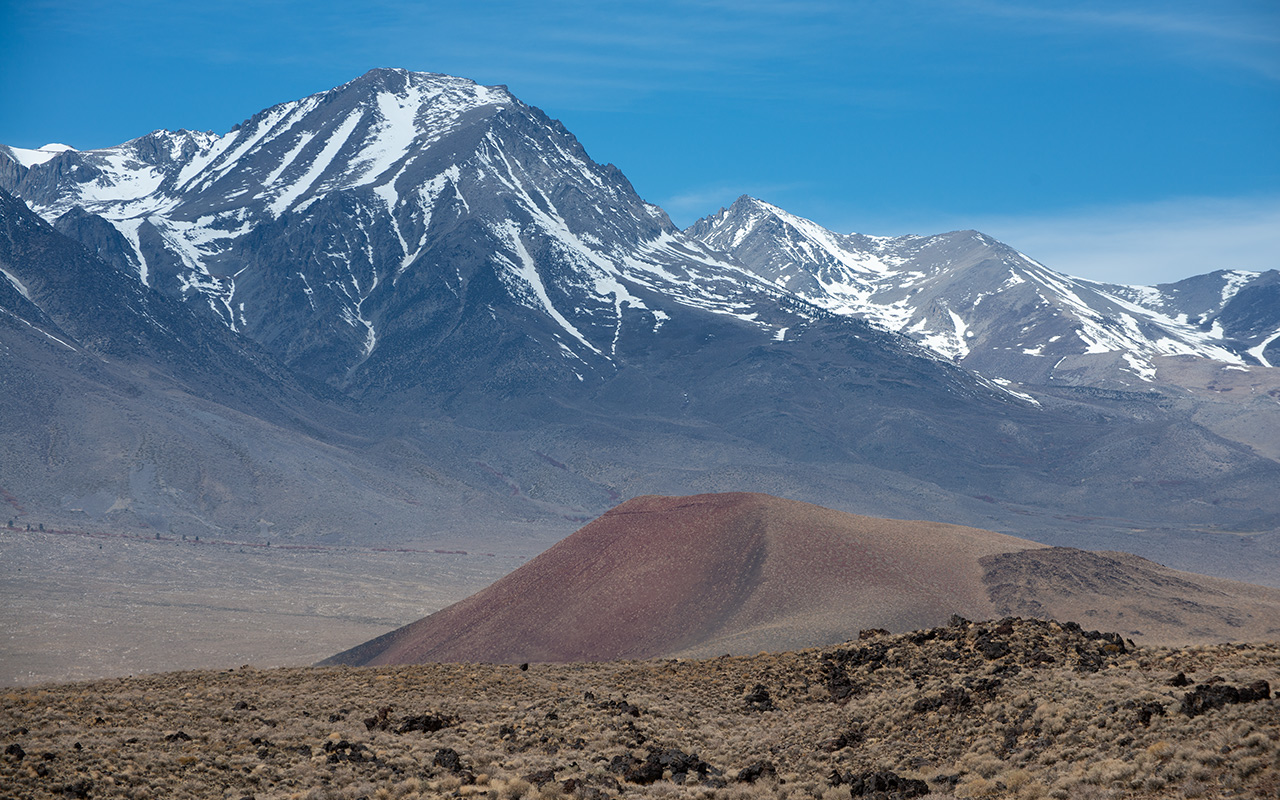 I like Birch Mountain as a benchmark for Eastern Sierra snowpack conditions because it's gigantic and because it's readily viewable from Highway 395. Birch's upper face tells us a lot about what the wind has been doing throughout the year, and its lower slopes tell us a lot about temperatures—as well as overall snowfall. So how are things looking here in March 2013?

First, let's check in with last year's Birch photo, taken April 20, 2012. Holy smokes, there was more snow up high on Birch in late April last year! Last year, as in the worst year ever. To be fair, last season there were some fine April storms, and the same may happen this year. But that's still a bleak-looking Birch, no matter how you slice it.

To really appreciate the significant of these images, you need to look at John Moynier's photos in Backcountry Skiing California's High Sierra. Look at John's shot of Birch in the 1999 edition: the whole massif is practically a gleaming shield of white all the way to Owens Valley. That's what Sierra backcountry skiing used to look like. This, it seems, is what it looks like now.

Farther north, you'll find highly variable but improving coverage. Once again, Mammoth and the Ritter range seem to have the caught the best of it. There are rumors that Tioga Pass Road is plowed (but not yet open), and the high peaks of Yosemite look promising if you can get to them. We found a very strange snowpack on Esha Peak last Sunday. It's far from clear whether all those facets will consolidate into corn as spring progresses—or just transition directly into rot.

In a way, however, SoCal backcountry skiers have an advantage this year: we're used to skiing any snow we can find, however abominable. There's certainly snow to be found in the Sierra, even if it doesn't make for the classic Sierra spring skiing experience. Adjust your expectations accordingly, and you'll find plenty of options (Birch Mountain excluded).

The season started out so strong, and then up and died. Disappointing.

Thanks for the update! I'm planning my usual spring trip back to CA so this is some timely info. I've had some great high road access corn snow in bad snow years- you just end up going earlier in the season. One benefit is less suncups. As usual my friends insist there's no snow and think I'm crazy, but I come back with a huge smile on my face... This year does look extremely low, but I'll give it a shot and see what happens.

When am I going to see an Elderberry Canyon trip on Mt. Tom? Supposed to be a great ski tour! This season it probably stinks, though.

I keep asking myself the same question. Elderberry seems to be one of those areas that has really been hit hard by the warming/drying of the Sierra over the past few years.

What's really getting scary is I'm starting to think of the Sierra as Mammoth+Places Farther North...

Resided in mammoth this winter, and looking on the bright side, we had many many weekends of 1-2ft cold fluff in the b.c. Jan-Feb with very low avy danger. It's funny how these "smaller" storms don't get the hype, but at the same time the avy's don't get loaded. Problem was a cursed NE wind came through 2days after almost every storm, stripping the champagne away, giving skiers only one day to hit the goods. Seems to be the natural consequence of having an east facing ridgeline that sits totally exposed to the great basin deserts...