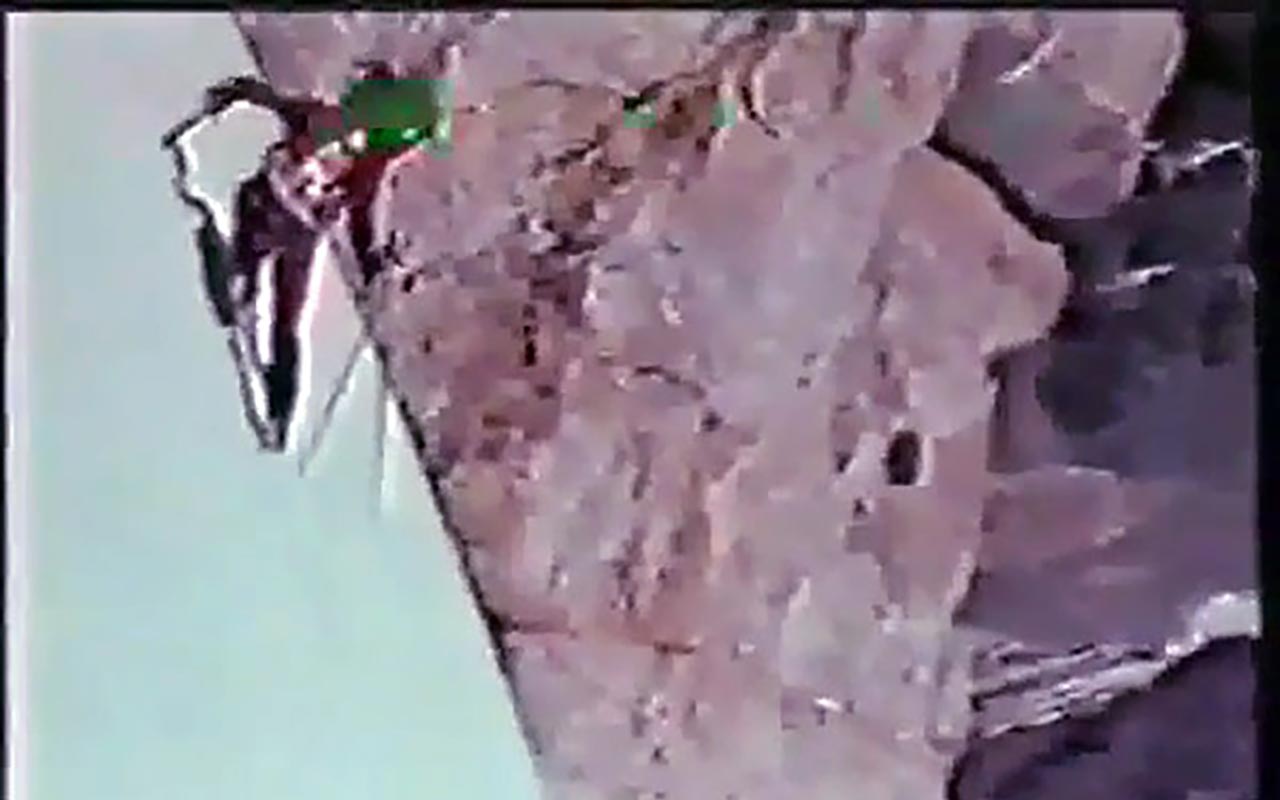 In 1979, Patrick Vallencant skied the west face of Peru's 21,768' Yerupaja. Lou Dawson describes the route as "Possibly the continuously steepest mountain ski descent ever done." Incredibly, Vallencant's descent was filmed, and that footage was made into a documentary called "El Gringo Eskiador."

Unfortunately, copies of the film are almost impossible to find.

However, it appears there was a screening at a film festival in Peru, and they've put an excerpt on their YouTube channel. Go watch it! In fact, watch it and then rip it, because if this disappears, you may never see it again. You may also wish to Google "Yerupaja" from within Google Earth to get a richer sense of place.

Among the skiers and mountaineers who've heard of its existence but never seen it, "Gringo" has achieved a sort of legendary status, a mythical lost record of Vallencant's 1979 descent. What does it actually look like? Steep. Unbelievably, impossibly, terrifyingly steep. The steepness of the pitch and the continuity of that steepness is simply difficult to process.

There is an honesty to the footage that grips me. I don't think I've ever seen as much fear in Vallencant's body language. His technique here is desperate and determined, stripped of all vanity. He appears to be operating at the very edge of his physical and mental limits—indeed, at the very edge of possibility itself.

Ultimately, these grainy images evoke as much mystery as they reveal. Could it really be so, I find myself asking? My brain recoils at the thought of perching atop that slope on skis. Perhaps someday, someone with a clean original print will produce an HD transfer of the entire film, so that we can better see the details. Or perhaps not. Maybe it's better this way.

UPDATE: there is some confusion as to which film documents Vallencant's Yurupaja descent. The Mountain Films database says this is a film called "La Pente" — not ‘Gringo.’ It's not clear if this footage appears in Gringo. I'll try to clarify.

Unbelievable. It's like he jumped off the edge of the world. With a huge pack. On skinny skis.

I can't believe this guy is the same species as me

Bonus: avalanche noises around 6:00 and then it gets REAL. Goddamn!

And then at 7:00 the musical revue begins. WTF?

Ski descent or descent on skis? Still massive vert on frozen styrofoam. What a climbing stud too. The future seems to be more like Backstrom's Couturier descent though dependent on pow vs settled snow. Either way so far above mortal men. How'd the steep technique"research" go this weekend?

Cancelled all plans, Tioga and otherwise, due to especially lousy timed bug. Hoping to regroup and get back up there first week of May...

On my but monday an tuesday-good luck. Turn the picture the right way and PV looks like he's making a World Cup turn?!