Steep Technique: I Was Wrong! 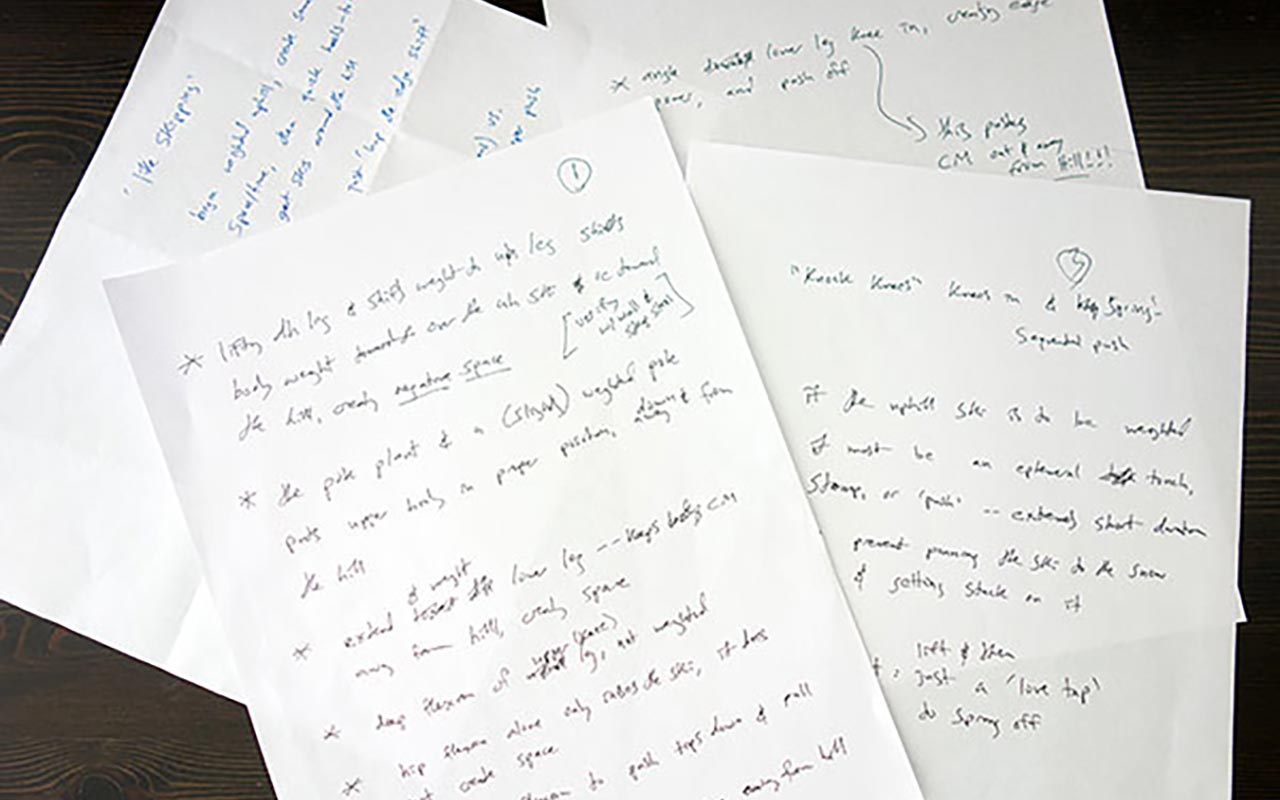 In my never-ending quest to master steep skiing technique, there have certainly been highs and lows, but I have to confess I've been stuck for a long time battling what I think of as the problem of getting "pinched" against the hill: I find myself unable to gracefully create enough space between my body and the snow, preventing me from making a clean release of the skis and an efficient pivot across the slope.

Steep skiing as an art form began in the 1970's, when Patrick Vallencant and Anselm Baud (among others) turned their attention to skiing the classic snow and ice climbs of the Chamonix Valley. The turn they developed is now generally known as the pedal turn, or pedal hop turn, and it is absolutely a marvel of efficiency and elegance.

I've read numerous descriptions of the turn, including Baud's own explanation, and yet, for all my efforts, I haven't quite been able to replicate it. At lower angles, I seem to have no trouble executing the fundamental motions smoothly. But in the super-steeps, where it counts, my motions become hurried and awkward. I've been completely stumped.

That was again the story at Mammoth last weekend, where I spent a full day on Mammoth's steeps, trying to decode the mysteries of the pedal turn. No matter how hard I tried, I just couldn't do it. The turn refused to work the way it was supposed to. Searching online that night for help, I found a detailed description of the turn by Eric and Rob DesLauriers.

The DesLauriers brothers advise beginning the pedal turn by "transferring all your weight to the little-toe edge of your uphill ski—simply take your weight off your downhill foot." From this position, with the uphill leg flexed, you push off the uphill ski, hopping your skis off the snow, lifting your heels, and pivoting the skis through the turn.

That description coincided more or less exactly with my understanding of the turn: you are effectively making the turn off your uphill foot. But their emphasis on the heel lift struck me as new and important information, possibly something I'd been missing. So I went back to Mammoth the following day to try it out. And...it didn't work!

Eric and Rob's exercises had the same problem everything else did: they broke down when the slope angle approached or exceeded 45°. Given that the pedal turn was invented to cope with 55° slopes, I realized I'd hit a brick wall. I drove home in a funk, mentally rehearsing motions, trying to identify the breakdown. I was sure I was executing the turn correctly, so what the hell was the problem?

Back at home, I couldn't let it go. I studied video tape. I practiced the sequence of moves over and over again in my kitchen. And then, completely by accident, using a step stool and a wall, I made a remarkable discovery. What if my understanding of the central principle of the pedal turn—weighting the uphill ski—what if that advice, taken literally, turns out to be dead wrong?

After so many false breakthroughs, it is perhaps too soon for me to say whether or not I've fully cracked the code of the pedal turn. But I'm feeling very optimistic. I've been putting together a collection of detailed notes, and I think I've got it. If I do, I'll put together a full series of articles explaining exactly how to do it, once and for all...

Why would you weigh your uphill leg? Wouldn't it tire you out more? Also, if you're turning, don't you want your uphill leg to be light so you can get it around to put it downhill and catch yourself? Or am I loosing something...?

andrei, you need to push off the uphill ski because on steeps, the downhill leg is fully extended and you cannot push off an extended leg. like when you jump, the legs have to be flexed, cannot jump off a straight leg.

andy, can you explain what you megan by air between the snow and your body? or getting pinched?

Guys I want to try my ideas out on the snow this weekend. If they pan out, I'll post everything I find...

As for getting 'pinched', I mean that feeling that gravity is pressing you into the slope when you try to unweight, preventing you from separating and clearing the skis around the hill

a couple of things that I notice in teaching steep technique. the downhill/outside ski "blocks" people from being able to commit down the fall line, which is essential for making a turn on steep terrain and the second thing is that if you are feeling yourself pinched against the hill it is definitely indicative of not committing the body down the fall line which can be exacerbated by that downhill ski. A couple of drills: find a very steep large mogul face or a very steep small side hill and without skis on try to make a turn with just your boots on down this face. do this both directions and multiple times. Then do it with skis on. Second drill: with skis on standing on the top of a mogul or steep side hill and facing across the fall line, lift your downhill ski tail off the snow. Turn/tilt this ski as if you were starting a turn, meaning that this downhill ski had big toe pressure but now make it have little toe pressure. then just fall into the new turn by moving your body down the fall line. Essentially committing into the turn. Having your downhill ski out of the way, not blocking you allows you to move into and through the turn. we call this a phantom ski turn. I have heard it called other things as well. I have used this when teaching tele or alpine and it works quite well.

Yikes, ski nerds! Addicts all, the first step is admitting it. Totally hooked on the discussion, good luck this weekend. What runs are you practicing on?

andy, when you are with one foot on the stool, and one on the floor, your shoulder should not be against the wall, the uphill shoulder should be over the foot that's on floor.

I learned the same from Eric and Rob and it worked out quite well. They also call it pedal carve I think, so they can remove the uphill movement, even in quite steep terrain. Looks pretty cool. I am not there, but in steep terrain, it works quite well. It is a continuous movement. Shift your weight on the uphill ski, jump off the uphill ski. At the same time turn the downhill ski toward the new direction (downhill). When jumping off from the uphill ski, do not move up, try to move your upper body toward the valley. The more you do that, the smoother goes the turn. In an extreme case, like for Eric and Rob, it looks as if there is no uphill movement at all and everything becomes a very smooth link of effortless turns. In very steep terrain it helps me to do the following. Before I move the weight onto the uphill ski, I lift it a tiny bit and then put it back down in an active mode, moving all the weight onto it and then jumping off from it right away. This is a bit similar to a regular parallel turn, if you move slightly down before releasing up. I hope i now did not confuse everyone :-)

Sorry to say, but it's still not all together there. I know, because I'm one of the very best and first to use it on 70 degree slopes.

I posted this statement to follow because the "Saute Pedale," Pedal Jump, appears to be a secret, past over, art form. I'm 66 years old now and am living with heart failure. I would hate to see that the most important turn in extreme skiing will pass away into history. Perhaps it is called something else? I looked all over the internet. It's not there. This one guy does a half ass't version of one that looks like he has no clue how to properly do it. And he's supposed to be one of the best.

I need to pass this on to the extreme skiing world. It's too good to be lost forever with false claims by misguided claims that aren't really the truth. Please don't be offended. I'm not implying that people today don't know something to a degree that I'm calling anyone stupid or ignorant. It's just that I can't find a real example of how it is done properly on Youtube.

I live near Sun Valley and would be happy to teach the world this lost art form.

"It was Georges Joubert, famous 50's to 70's french ski instructor, that gave us the "Pedal Jump" turn. It is correct to initiate the pedal jump from a stable, not sliding in a decent motion. It looks better when doing it in motion forward though, with a stable set of edges. The downhill ski is brought out of the snow and turned downhill in a motion where momentum in the turn carries the downhill ski to a point that becomes the new uphill ski, perpendicular to the fall line. Just after the old uphill ski has you all torqued up like a spring the existing uphill ski hops and follows the pedal jump ski. So it's a quick hop, hop motion. You never hop both skis at the same moment. The inside ski in the turn starts momentum toward the reverse direction and the old uphill ski becomes the new down hill ski after the full turn is executed. This is a very controlled way to reverse direction without picking up downhill speed. It's one way to make a smooth decent while making everything look very easy. You can get very good at it to the point that you are not taking the (uphill to new downhill ski) out of the snow, just unweighting it, where it looks like you are just carving turns at your leisure. But it is actually is a hop nevertheless.﻿"

So I was reading the comments. The way you put the weight on the uphill ski is by lifting the downhill ski, the ski that will be the inside ski in the turn, and you rotate it toward the fall line as if you intend to turn it a full 180 degrees. The back of this ski goes behind the uphill ski's leg. When it gets to pointing straight down the hill, half way between the full 180 degrees, at 90 degrees, its has momentum. You jump off the uphill ski and let the core of you body follow the already spinning inside ski. Your uphill ski follows the inside leg, outside leg pedal motion. That's where it gets it's name. It comes form one leg and then the other pushing. It's never a both skis at the same time kind of a jump. It is so easy that you will laugh once you have it mastered. So, for a brief second you stand on the uphill foot while you initiate the spin. You will bring both skis around with grace and ease without dropping more than two or three feet.

Good luck with it. It will cause you to crank up the steepness.

I found it. I also found the origin of it. I learned it form Bela.
http://www.earnyourturns.com/11556/backcountry-ski-technique-pedal-hop-turn/