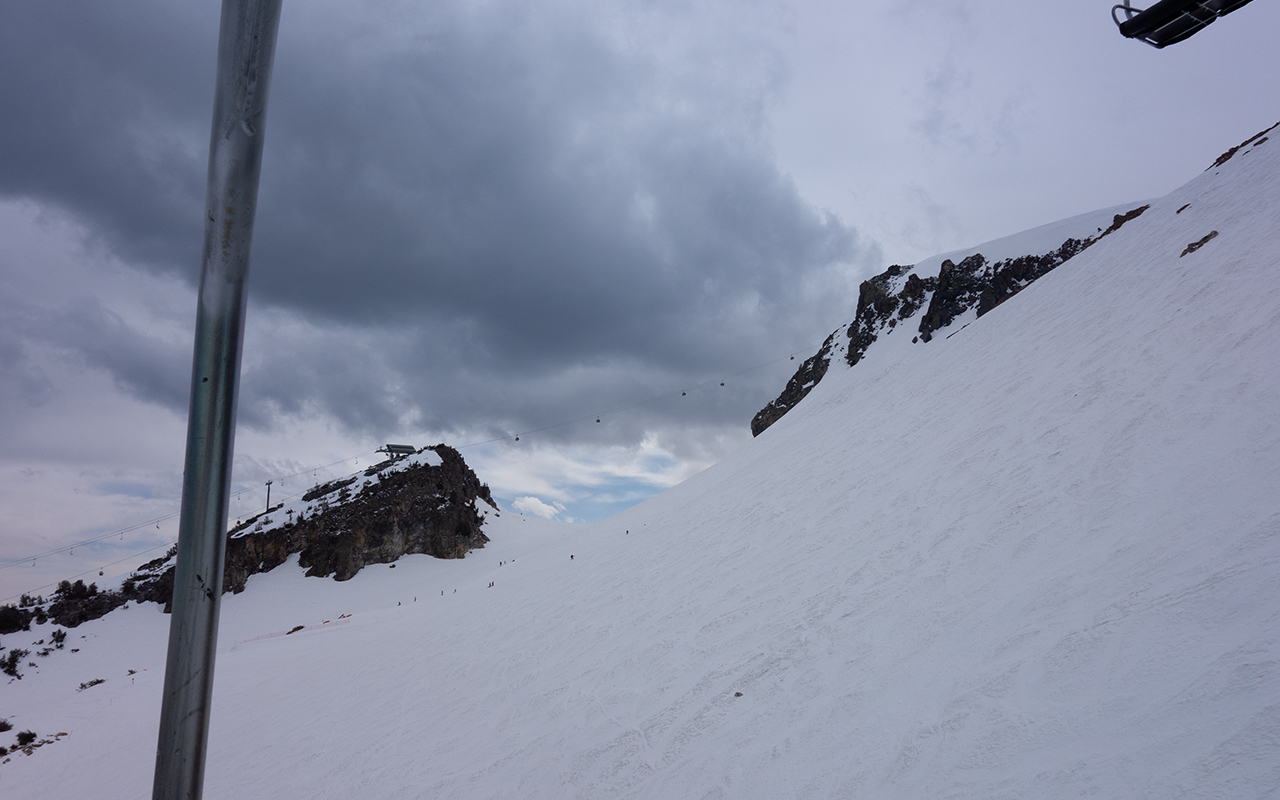 It was such a beautiful sunny morning here at Mammoth Mountain California, I was beginning to hope the forecast T-storms would fail to show. Nope: right around 11 a.m. things began to cloud up, and by noon, there was an big black cloud hanging just west of the mountain, drifting steadily toward Chair 23. But the best skiing was off the top, and I just wasn't ready to go home.

Though it was cloudy from horizon to horizon, there wasn't a hint of thunder, so I started thinking maybe there wasn't any active lighting hazard—just clouds and precip. Still, that cloud over Chair 23 looked pretty menacing. Nevertheless, they were running the chair, and there were people riding it. Maybe, the optimist in me speculated, Mammoth had some kind of electro-static voltmeter installed at the top, and it was indicating no static charge buildup.

So I got on the chair.

I should mention, if I haven't already, that I'm TERRIFIED of lightning. I've had many, many close calls with lightning, primarily involving outdoor activities and the summer monsoons of Northern Arizona. I know exactly what the sharp, arcing, whip-crack of lightning sounds like up close. Just thinking about it makes my head sink and my shoulders rise in the instinctive and universal, 'oh shit' position.

So I generally give dark black clouds a wide berth. But today, for whatever foolish reason, I didn't. And everything seemed fine for a minute or two. And then I felt something funny in my arm, which was resting on the metal frame of the chair. Like I'd pinched a nerve. Huh, I thought. That felt kind of like...a shock. But no, my very quick defensive reaction insisted, I'm just imagining it, because I'm a little on edge about that dark cloud I'm now heading helplessly straight up into.

I looked up at that dark cloud, and also at the long length of cable ahead. I had probably around eight minutes to go before I reached the top and could jump off the chairlift and get the hell out of there. It seemed to me that perching on the edge of the chair was not without risk. If for some reason lightning struck and caused my to spasm or just freak out, there was a good chance I could fall out of the chair.

So I tried holding on to the chair again—BZZST! That wasn't going to work. How much longer was this ride going to go on? It was starting to look like forever. Okay, I said to myself, calm down. What should I do? Pray, is the word that popped into my mind. I tried that, but it didn't really make me feel any better. So I just kind of went to my happy place for those eternity-minutes left of the chair ride, and at the top, I flagged the liftie and told him I was getting shocked by the chair.

He didn't seem too surprised. Apparently other riders had already reported their electrifying experience. Oddly, he said he didn't have any authority to shut down the lift, but that he'd called maintenance so that they could look into it.

Okay. I guess, if lightning isn't actively cracking all around, you can make some kind of crazy case that you should continue running a chairlift even when multiple riders report they're being electrocuted on the way up. But maybe, just maybe, couldn't we phone down to the guy at the bottom, so he could helpfully inform people, before they get on the chair, that if they choose to board, they should be prepared for a hair-raising experience?

Had a similar experience at Vail many years ago. I was riding a chairlift up the back bowls when I suddenly felt a tremendous pain in one butt cheek. If the safety bar was not down I would have jumped off the chair. No one else on the chair felt anything. When we got to the top, there was a full on lighting/heavy hailstorm and they shut down the entire mountain.
The best guess on what happened was that lightning hit the chair and discharged or partially discharged through my pole tips. I was sitting on my poles, so the shortest path went through my ass.

I've had many close calls with lightning in the Sierra. When we did Whitney last year, a full on thunderstorm moved in during our descent. Snow, lightning, you name it. Hair raising ... literally, since the static in the air was so powerful. Glad I did it, but really don't like being out in the open during a thunderstorm.