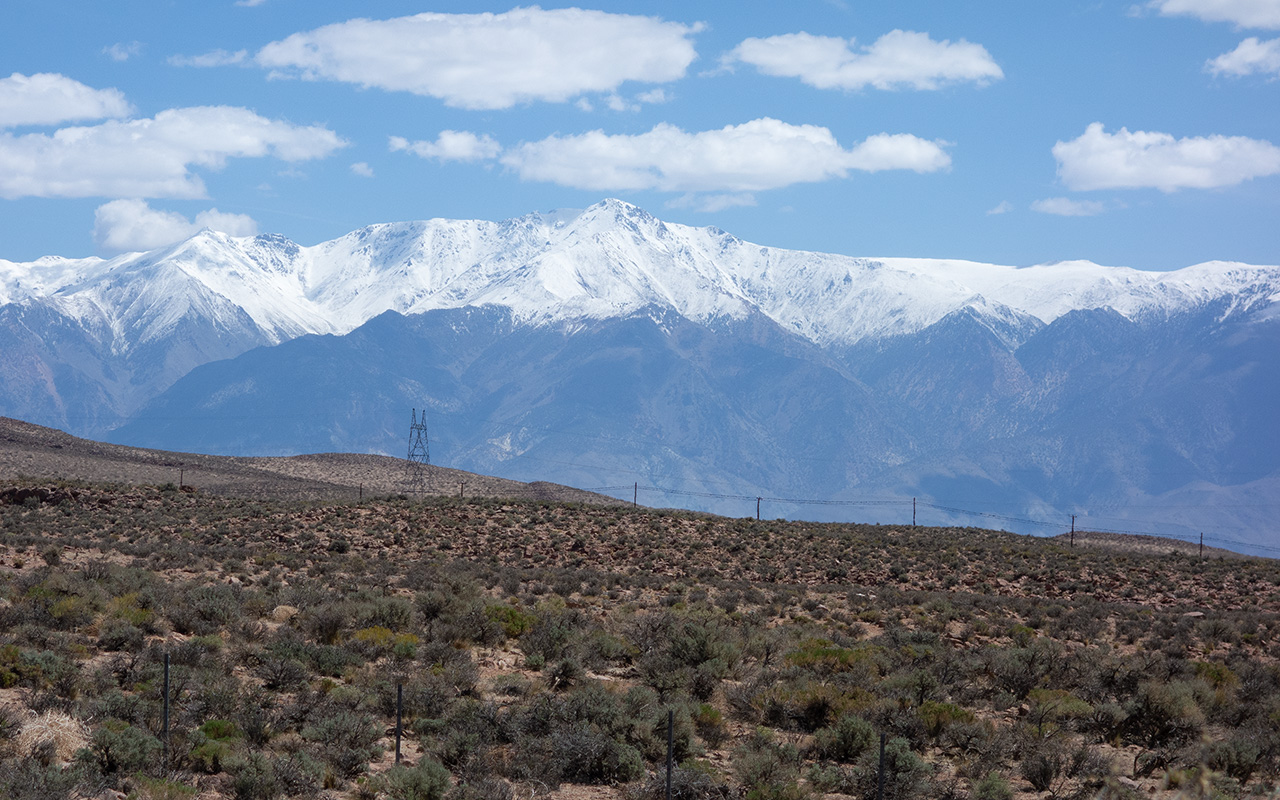 Passing Olancha and entering the outskirts of Lone Pine on Highway 395, what should my wondering eyes see but snow—and lots of it—dusting the high peaks. Apparently last week's thunderstorms did a little more work than I gave them credit for. The Whitney Zone seemed to catch a good piece of it, but farther north, say Bishop area, there wasn't nearly as much in the Sierra. But look at White Mountain!

What was a week ago a big pile of brown dirt is now a gleaming white fin dominating the entire eastern horizon. Naturally I took one look at this and immediately wondered if the road to Barcroft is open. Here is yet another of the many, many California roads that shut down in winter and open just too late to offer skiers any kind of reasonable access to the snowline.

Paul Richins talked about this issue a lot in his guidebook (he recommended writing your Congressman), but all across California's high country, year after year, the story remains the same: we've got lots of mountains. We just can't (easily) get to them.

We just drove over Tioga on opening day and were shocked at how far gone everything is already. Could Silver Canyon be a reasonable alternative approach for the whites?

Yes, as long as you scratch out the word "reasonable" :)

Yeah it's just a nice drive in the Xterra, which we're thinking of selling for the ultimate road trip vehicle - a sprinter van. At which point I will say adios to roads like Silver Canyon...

One of the beautiful things about the Eastern High Sierra is the dramatic 10,000 foot granite escarpment that is the front range. From ~4,000' valley floor to ~14,000' summit, it is both stark and dramatic.

However, that massive escarpment also makes access to the high peaks frustrating. The snow in the 4,000-6,000' range of the high desert is gone long before the snow in the high country vanishes. In addition, those dramatically steep flanks make building roads a daunting proposition. As a result, we all hike thousands of feet to reach the snow line.

With all that said, it is a great place to ski mountaineer and the reward in a normal year is well worth the effort.

I was just up there today. It is almost all gone :(

Joseph, how did you get up there? Is the road open?

I got my 05 Corolla to within a mile of Barcroft Gate. The weather was clear and WINDY. Didn't see anyone else all day. Right now the contrast between the snow and the surrounding rock on White is breathtaking...