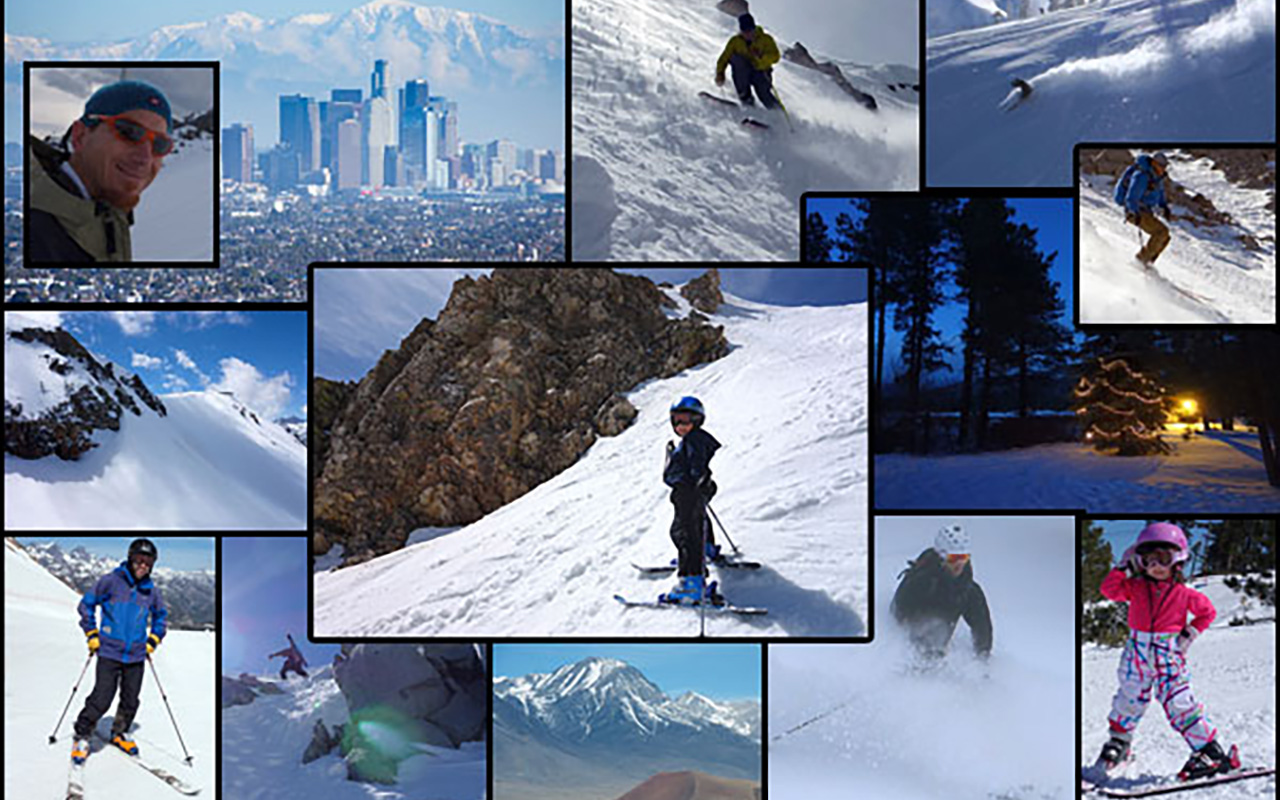 Well it looks like I'm finally hanging up the skins on this unfinished-business of a 2012-2013 ski season. I'd hoped to add a volcano trip here in the waning weeks, but even that has fallen through, so I spent the day instead looking over posts and pictures from these past few months, thinking about some of the highs and lows of what turned out to be another record-dry Sierra winter.

Was I having dark premonitions at the start of the 2012-2013 winter? Maybe. But mid-December brought enough natural snow, combined with aggressive snowmaking, to make for good conditions at the Big Bear resorts. As for the SoCal backcountry, we'd get achingly close to seeing our favorite lines fill in, only to have the weather turn warm and dry for weeks on end.

There was a notable cold snap in early January to complain about. But really: being in L.A. when temperatures are near freezing is no fun at all. So I tried to stay optimistic and I kept skiing Snow Valley.

A well-timed trip to Telluride definitely made things better. They were having their own problems before we arrived, with a mountain that was at the margins of skiable. It began snowing right before we got there, and it snowed enough to cover the rocks and deliver us this magic day, which is one I'll long remember.

I'll also remember seeing the delight on my little girl's face when she learned, this season at Telluride Ski School, how to ski all by herself, off the leash. Her older brother, meanwhile, went on a rampage of his own, ending up with him skiing the Drop Out Chutes at Mammoth—his choice, not mine. Consider me a very proud papa.

Back home I managed to catch a very brief window of opportunity on San Jacinto. And as it became clear that the Southland Mountains weren't going to come back to life, there was Mammoth and lots of it. In a way I feel like I finally got Mammoth this past year.

No, there weren't any powder days (for me), but conditions at the resort were still outstanding for much of the year, thanks to a heavy early season. And for once I found myself appreciating Mammoth for the quality of its skiing, rather than thinking about all the other things it is not. My frequent Mammoth trips this year coincided perfectly with my determination to unravel the mystery of steep skiing technique.

Trip after trip, I kept trying conventional wisdom and coming up short. And then, in a fit of experimentation in my kitchen, I suddenly came up with a new hypothesis that totally broke the technique wide open for me the next time I made it to Mammoth. The only problem now is I have to find the patience to wait all Summer to put it into practice.

On the subject of steep skiing, I finally found a piece of the missing Gringo Eskiador film, in which Patrick Vallencant skis the west face of Yerupaja. Among those who've heard of it, this descent has over the years achieved a sort of mythical status. Seeing actual moving pictures of it, if anything, only heightened my sense of awe at Vallencant's daring.

My own backcountry accomplishments were far more modest: a descent of Esha Peak with SMG guide Jed Porter. Connecting with others was by far the overall highlight of my season. For those of you who shared turns with me, getting out there with you inbounds or out (mostly in) made the season a great one for me, snow or no snow. Thank you to everyone who put up with me and my camera all season long!

Can't wait for the backpacking stories to start showing up!!!

Only 7 days on hill but 3 in 12"+ and 2 in good 2nd day left overs. Obsessive weather watching and self employment combined well this year for a pretty dry year! 3-9 stood out as one of my best ever local days. Thoroughly enjoyed the steep lecture series and kid stories (my son did an inadvertant sideways 360 off a knob just north of Drop Out, like 30' free fall-yikes, good times). Meanwhile I was offered a guided try for Middle Pal on 7-11 (birthday!) So let the spouse negotiations begin.