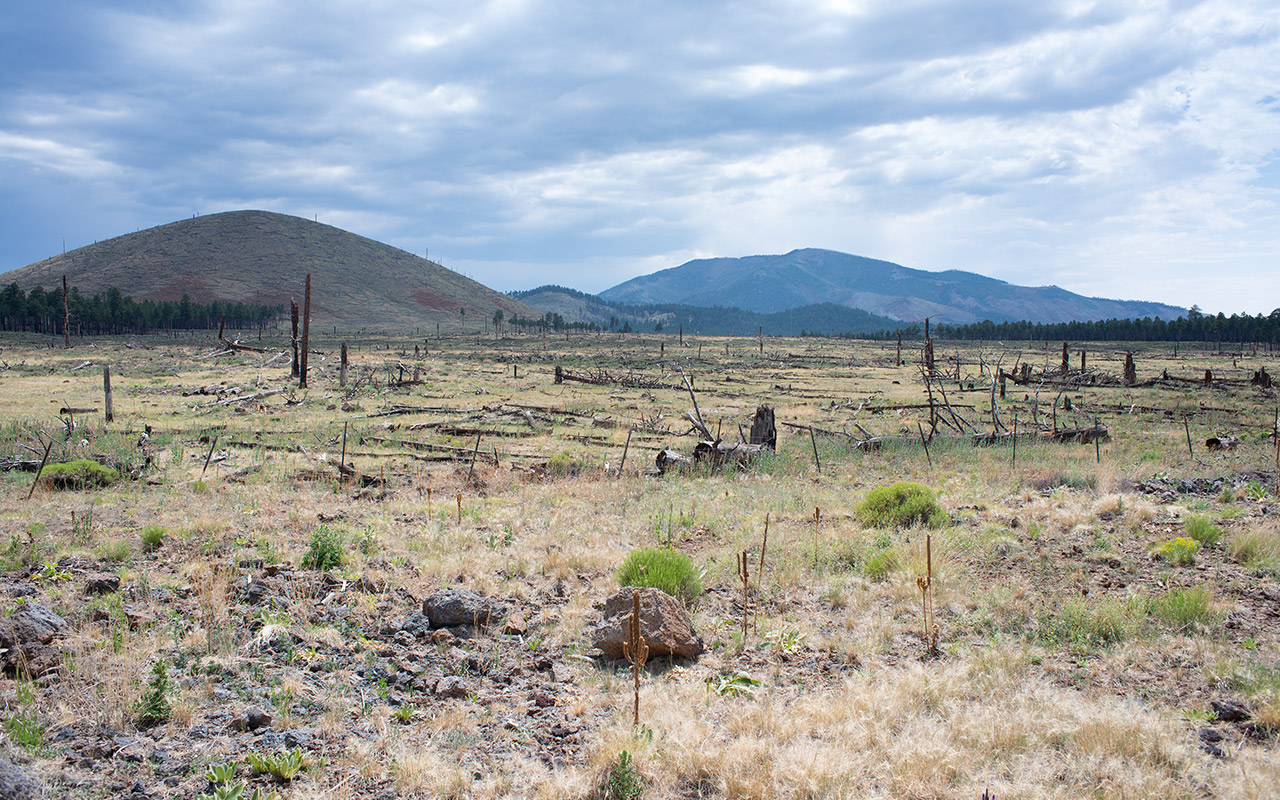 If you want a canary in the coalmine for climate change in the western U.S., try Northern Arizona's Coconino National Forest. The forest features the world's largest contiguous stand of Ponderosa Pines, all growing in a region whose sparse rainfall (about 22" annually in Flagstaff) is far more typical of a high desert rather than evergreen landscape.

What keeps the forests alive and well in Arizona is the summer monsoon—a rainy season that typically begins July 4 and extends until the start of September—and what keeps the monsoon going is a fascinating interaction of weather patterns that actually begins over the Gulf of Mexico. A persistent high pressure system forms over the Gulf in summer, and its clockwise flow grabs moisture from the jungles of Mexico and propels it into western New Mexico and eastern Arizona.

When summer sun heats humid air over the deserts, thunderstorms bloom, and crucial rains fall across the state. This action-at-a-distance precipitation would seem to be sensitive to changes in global weather patterns, and indeed, the monsoon has become increasingly erratic over the past decade or so. As well, wildfires in Arizona's forests have become increasingly destructive.

This is immediately evident driving the highways surrounding Flagstaff. Here you see the aftermath of 2000's Pumpkin Fire, looking toward Kendrick Peak from Highway 180. The Pumpkin Fire was one of the first of a new breed of fires, striking drought-weakened forests during dangerously hot, dry, and windy conditions. Temperatures spiked so high during the blaze that large portions of the soil were said to have been sterilized, leaving behind a haunting moonscape devoid of vegetation.

Today, there are of course signs of recovery in the area, but the fire's signature remains unmistakeable. And there are the scars of more recent, and equally destructive burns, visible throughout the area.

It's hard to imagine an ecosystem as large as the Coconino actually vanishing, but at the same time, it's easy to see the forest faces an uncertain future. For the past few years, forest service crews have conducted a remarkably aggressive plan to thin the forest, hoping to reduce the potential for large, destructive wildfires by returning the forest (and fire cycle) to a (presumably) more natural state.

Ultimately, however, the forest's fate will likely depend on the continued stability of the monsoon in the face of a rapidly-changing atmosphere.

Unquestionably, climate change and drought are probably making these fires more intense and dangerous. But wildfires are an important natural event. Too much firefighting, necessary these days to prevent structure damage, has resulted in areas that don't burn for longer than they normally would and when they do, there's even more fuel. In Yosemite last week I saw a figure that'd been burning since May- in the last decade or so they've tried to curtail their firefighting efforts and let natural fires not threatening "assets" burn as they would have before humans inhabited these areas.

I find myself wondering if the notion of a 'natural' forest might actually be illusory. For one thing, humans have been interfering with these woods for thousands of years. For another, I find it hard to believe that fire could be so well mannered and well distributed to create the sort of low-density low-fuel forest--on a vast scale, year after year--that rangers say is the natural state. Maybe I just lack imagination. :)