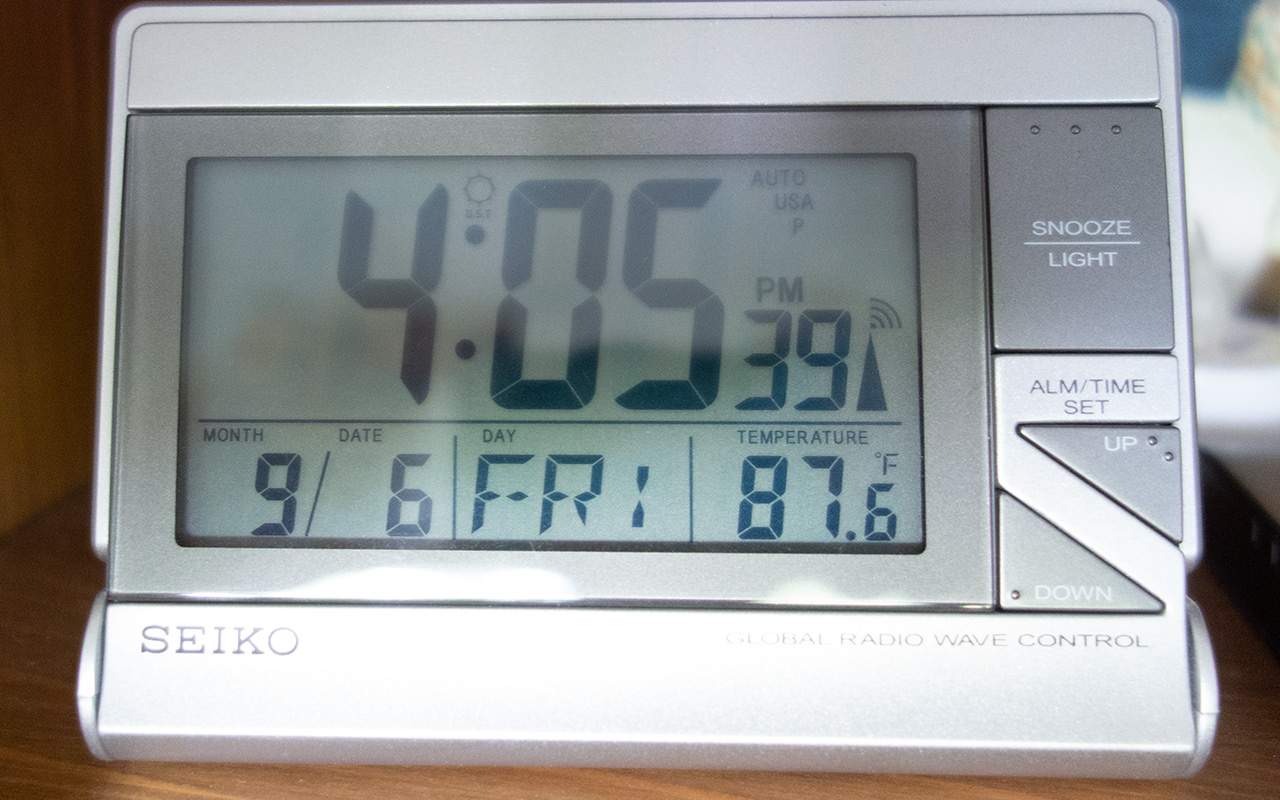 First of all, I apologize. I knew writing about our record-cool first two weeks of August was just asking for trouble, and I did it anyway, and of course mere days later Los Angeles and indeed much of California started a nasty heat wave that has been going strong ever since.

So: apologies for that. I've been tempted to delete the post, as the sight of it now seems to mock me, but I guess I'll leave it as a cautionary reminder of the brutal consequences of tempting Mother Nature.

I've got a clock thermometer in my living room, and it's been interesting to watch how my subjective sense of the temperature has shifted over time, as the heat has continued. Initially, thanks to our cool July and early August, I start feeling hot and stuffy whenever the temperature inside my apartment got above 75.8—I give the decimal for added precision. Seriously, though, that number was remarkably stable. Right around 76° Fahrenheit, I started getting uncomfortable.

So it was quite a rude shock to watch the thermometer climb right past 80, and then close on 90. And there we have sat, for interior daytime temperatures, ever since. However, after two plus weeks of heat, my own internal sense of the weather has shifted. Now, so long as the thermometer stays away from 90, I find it warm but not unbearable inside my home, and—get this—if my clock thermometer reads anything less than 80, as it does in the wee hours, it starts to feel cool.

Interesting! I'd never really given it that much thought, but it turns out our bodies adapt to heat just as they do to altitude, increasing not only comfort but also performance and yes, even safety. On the performance side, though, let's be realistic: a good bit of that adaptation turns out to be just lowering your activity level. I'm guessing statewide we've seen a massive productivity drop. But there are real physiological changes as well.

If you're wondering, it takes about two weeks of continued exposure to adapt, which corresponds nicely with the shift I've noticed in my own reaction to the heat. That said, I'll sure be glad when it's all over. Those skis are looking mighty lonely in the corner.

Meanwhile it's rained on us every night for 4 nights in the seki backcountry.

So this hot weather was YOUR fault??? Thanks a lot, Andy! We've be dying south of you with no a/c and 83% humidity with the 90 degree weather. I've never been so happy to work in an office and to burst through the doors at 7:00 a.m. on Mondays! The dogs are hot, too, but at least they can sprawl on the tile floors without a loss of dignity :) Hope you're well otherwise.