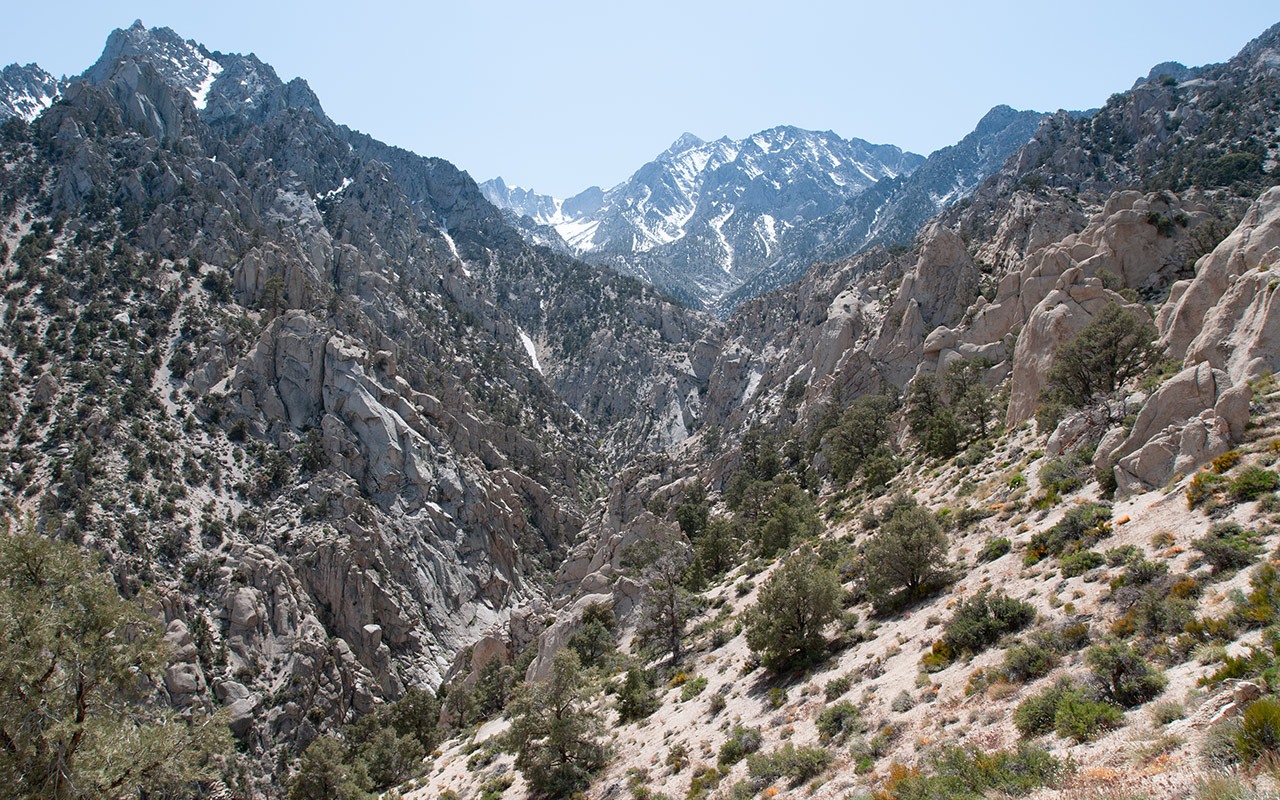 Waiting for snow to arrive has me contemplating a similar frustration: not being able to get to the snow even when it is here. Yes, I'm talking about those maddeningly-tough Eastern Sierra approaches. I admit I believe getting yourself and your skis to the snowline in the area between, say, Olancha Peak and the Palisades ranks among the more grueling touring challenges in the lower 48.

As is my habit, I like to apply myself to daunting challenges by throwing myself right into the middle of them, preferably with as little preparation as possible. This, in the initial phase of my Sierra dabbling, led to the memorable comedy of me carrying skis plus gear on my back for hours, only to crap out, over and over again, before I even reached the snow.

Thankfully I kept trying, though to this day, whenever I'm attempting a new route, I find myself remembering long-ago struggles versus sand and brush and rock that ended, as they say, before they ever began. What makes the Sierra so difficult? A wicked convergence of coincidences. Blame Mother Nature, who failed to put enough gold in them thar hills—and so kept the mountains free from miners, roads, and settlements.

Blame Owens Valley, for the heat that kept the glaciers away—and so kept the drainages narrow, cliff-bound, and brush-choked. And blame the Earth's crust itself, whose bold uplift created such a massive vertical rise in so short a horizontal span—and so utterly ensnared the dreams of southern California ski mountaineers.

In any case, tromping around hopelessly in the dust beneath a mammoth wall of granite is something of a rite of passage for Eastern Sierra skiers. Recommendations? Whenever possible, piggypack on established trails, or failing that, use trails, to gain height and depth. If you have the discipline, there is no substitute for visiting the range in summer, without skis, and exploring key drainages to try to learn their secrets.

Barring that, strategic use of Google Earth can reveal likely trouble spots. Look especially for thick blocks of vegetation, and also for knots or twists in drainages where everything pinches together—these will almost certainly be impassible. Often (as is the case with the Bairs Creek Cirque, for example), there is a trick to bypassing these sections. With it, the snow awaits; without, well, as they say, it builds character.

For a while I was convinced there was a riddle of gear to be solved—if I could just find the right things to use, in the right way, I could pass easily back and forth between the Owens Valley desert and the High Sierra snowfields above. This led to my 2x2 rule: wear A/T boots if hiking less than two miles or two thousand vertical feet, otherwise, wear hiking boots. And I remain fanatic about carrying as little weight as possible overall.

Gear choices do make a huge difference, no doubt, but every route proves different. What works on one leads to misery on another, and even when things do work, you'll still be miserable. I was hiking Gorgonio this past summer with my friend Trevor, and our speed up the trail, such as it was, seemed to impress two very fit young women whom we may or may not have been chasing.

How were these two old men moving so (relatively) quickly, the ladies wanted to know? "We're just good at suffering," Trevor told them. Yep: that's the secret. Gear, technique, fitness, all have their place, but in skiing as in life, there's just no substitute for a willingness to suffer until you achieve your goal. Now send us some snow so we can start suffering! :)

Amen brother Andy....I beg you mother nature to let it snow and in return I will bare you my soul!!!:)

Open question whether the snow gets here in time to keep me from going completely bonkers...or is it too late already? :)

Possible local snow at 6k level this weekend! Nice analysis on dedication proved by perspiration. While my skiing is basically in bounds, I've found that willingness to pound out laps in marginal conditions has prepped me for the good days or the surprises (snow snakes, death cookies, dust on crust pockets, etc). Nothing like hitting THE day feeling strong to go lap after lap, the payoff for the hard yards. Having my butt kicked last September at Langley's base made me a more willing and careful student (thanks again for the strategy article) and, hopefully better prepared for next summer. Seems like adversity is the mother if willingness.

"Alpinism is the art of suffering." Wojciech Kurtyka