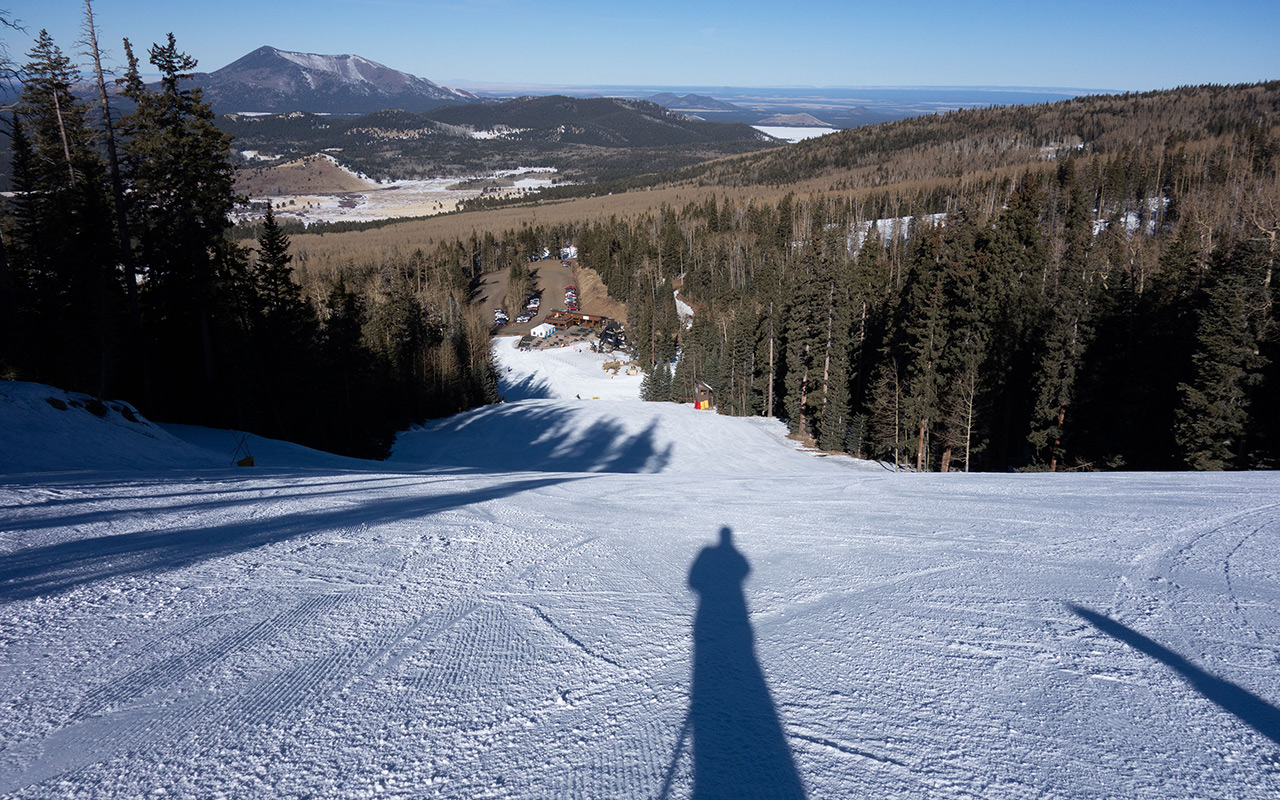 As I contemplate the reality of what appears to be the worst Sierra winter any of us have ever seen, I find myself thinking about the obvious importance snowmaking is going to have for the survival of many ski areas. We're back from a week in Flagstaff, skiing the Arizona Snowbowl, which has recently installed (after endless legal battles) a working snowmaking system.

Snowmaking has permitted the Snowbowl to open for the whole of this year's critical holiday season despite poor natural snowfall—but does that make it a success? Where Southern California resorts like Snow Summit and Snow Valley are able to run on a 12" base with reasonably acceptable results, the Snow Bowl is not. Like Mammoth, it's a volcano, made entirely of loose rock and cinders, which soon work their way through a minimal snowpack, becoming embedded in every part of it.

This leads to the disconcerting experience of hearing rocks continuously hitting your ski tips as you ski down—the sound is surprisingly loud, like whacking golf balls. And all those rocks, loose and otherwise, do irreparable damage to your skis. If you're skiing the Snowbowl right now, you're using rock skis, one way or another. So be it, you say; there is a core group of skiers who will show up and ski it whatever it is as long as the lift is running.

But those aren't the skiers who pay the resort's bills. And the majority of day ticket buyers are clearly voicing their disapproval by staying home.

This rock-permeated snowpack isn't a new problem for the Snowbowl. The same conditions existed when natural snowpack was thin, leading me to ponder long ago whether it would make sense to identify the worst offending rock-garden areas and just cover them somehow—either with dirt and grass, in summer, or even AstroTurf. But I've never seen anything like that.

Yes, it's theoretically possible Snowbowl could just keep the resort closed, and keep making snow until the base is deep enough to keep all the rocks buried, but in practice that would be extremely expensive, and the temptation to open prematurely on what would appear to be an abundant base would probably be impossible to resist.

How about augmenting or even replacing snow with something truly man-made, like itty-bitty plastic flakes or pellets? Surely we could fabricate something that would serve as a reasonable facsimile for snow. Maybe it would ski just like bottomless powder, even in the middle of summer. Maybe that would draw people to the hills when winter has gone AWOL.

Or maybe not. Perhaps you're aware of what I call the Mountain High effect: skiing can be great in the local mountains, but if the weather is sunny and warm in the city, people stay home. Send in one meager storm, and suddenly an avalanche of people rush to the resorts, clogging the roads and the slopes in one sudden, immense, madhouse gauntlet run.

Storms are their own marketing team, infusing everyone's brains everywhere with one clear message: there's snow in them thar hills. Keep the weather sunny, dry, and warm, like it is now, and everyone instead finds other things to do, be it hiking, biking, or just heading to the beach.

Brutal winter! I think we should just buy Mt Waterman and cover it with snowflex.

If the real snow is not there people won't go to the mountains to ski. Yesterday's Tahoe Daily Tribune reported that skier visits were down almost %25 at Vail's Tahoe resorts. With snowboards and fat rockered skis, people want powder. It's not like it was 15 years ago when only good skiers could go off piste on 65mm skis. Back then most people stayed on the groomers and man- made retail snow was good enough. Also, the ski areas have to make up the cost of snow making. Heavenly is charging over $99 for a day pass right now, ouch.
Let it snow!!

Northstar is $119! Squaw and Alpine shouldn't even be open. We skied diamond peak with the family and it had some decent man made and it was cheap. Guess we need to go elsewhere again this year. Bummer

I'm not sure about calling this the worst winter ever - it's no worse than 2 winters ago, but you may be proven right if things don't change. And to Charles - Alpine was a blast today, don't know what you're talking about. Sugar Bowl is fun right now too.

I grew up near Mammoth. I just can't do man-made snow. My high school years saw some epic conditions, and I just can't tolerate skiing on groomers all day, especially when those groomers are covered in man-made crap. Calendar 2013 was the driest calendar year in California's 119 years of official record keeping. At least last season there was great snow in December. This year I may buy new equipment. I'm sure sales have been so bad that the prices are great.