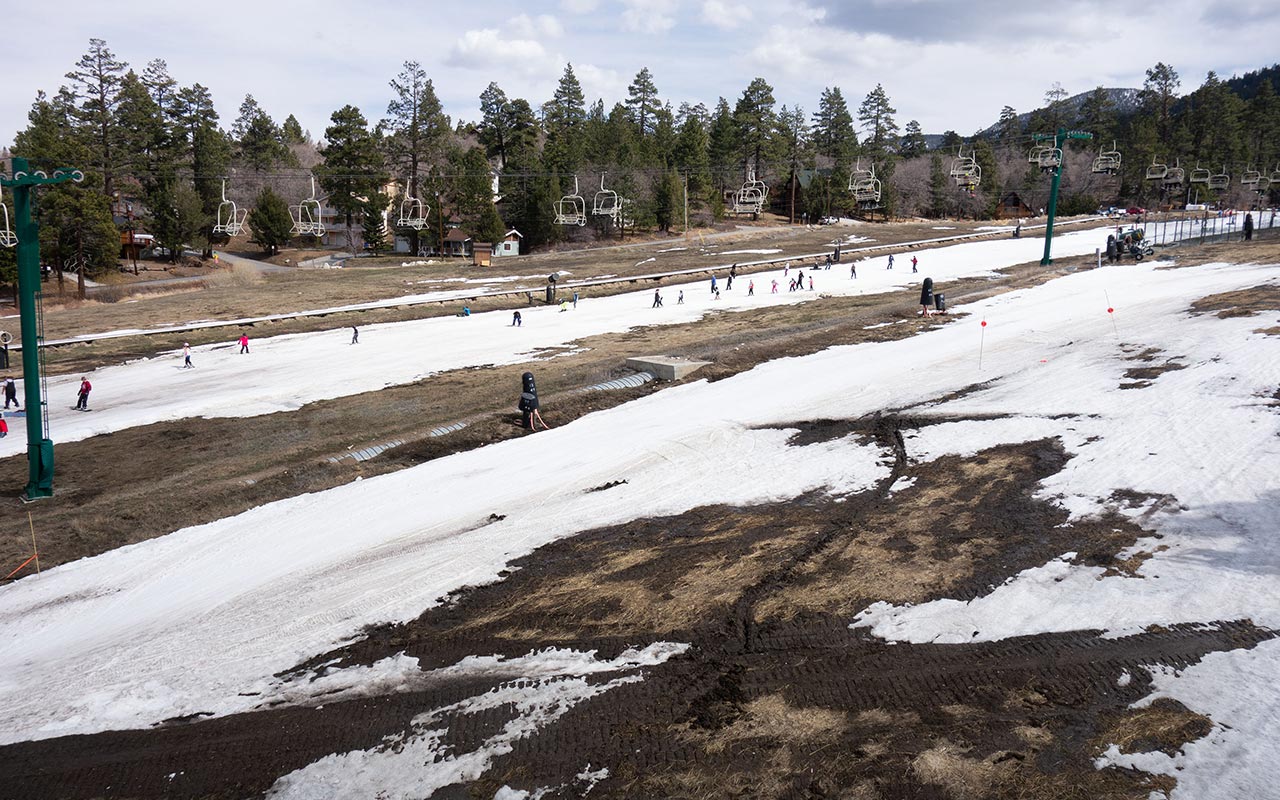 Perhaps I go too far in comparing yesterday at Bear Mountain's "Access Express" chair to a Hieronymus Bosch nightmare, but if you're worried about what the endgame for Southern California skiing might just look like, this surely was an unsettling landscape. Ribbons of brown snow wound through muddy fields, whilst crowds of people shuffled slowly across it.

Yes, it was fun—but was it skiing? I thought, as I pondered the scene, it was like an epic collision between an immovable object (Bear Resorts' incredible snowmaking capability) and an irresistible force (an increasingly hot-tempered Mother Nature). You can judge for yourself who appears to be winning this one.

Will we see refrigerated ground and retractable canopies in the near future? Micro-plastic "snow" pellets? Do not laugh, Colorado resorts. What you see here—which resembles far more a Tough Mudder course than a ski hill—may well loom near in all our futures.

Higher on the mountain, thank goodness, conditions were quite a bit more tenable. Nice, even. I have not skied Bear in years and years, not since before they converted it to a "park" mountain, and I have to say the terrain absolutely feels the biggest of the SoCal resorts, minus Baldy because of course Baldy has been AWOL for three years.

There is still snow on San Gorgonio's north face. Despite numerous attempts I could not (literally!) pay any of my partners to climb up there with me, and at this point I'm fed up enough to where you probably couldn't pay me to join you, either. Bear says the chairs will run one more week. And that's the SoCal season.

Sierra skiers stay tuned—your story is not over yet.

"Sierra skiers stay tuned—your story is not over yet."

For real. Current forecast is looking good for, like, the third time this season. Sweet!

Actually, it looks rad for the Shlassen area. Should help the spring volcano season last a bit longer this year.

Roger that on the terrain. Show time had near silky corn for several runs last Saturday while I searched for the elusive chair 4. My eye and talking to some guys reveal a marked potential for lift and foot accessed side country. Sort of like a southern cousin of Alpine Meadows in height and overall acreage- just add snow. This is not the first draught I've seen and the persistent warmth is disturbing not doubt, but then again dams and massive north/south water conveyance systems stand as memorials to our meteorological folly in the Golden State. Sadly, I have never seen fruit (plum I think) trees bloom in March in the Valley. I think the persistent "Santa Ana" ridge system this year was unprecedented both preventing precip and raising the mean temps on the west coast. Meanwhile the Great Lakes are frozen for this first time in decades. I have faith it will be our time soon enough. Why I remember the good old days when saber tooth tigers roamed the LA basin and Lar, Grlll, and the rest of the crew set a booter up to where the Hollywood sign is now-good times at latitude 34

I see I'm not the only one with an Ice Age fantasy of skiing Mt. Hollywood... :)

So... if the wife gave me a '12-hr window' and i live in Venice, where should i drive/hike/ski/run to car/beat traffic/home by 5 pm adventure seeking go? Angeles Crest? Backside of Baldy? San G? San J? Southern Sierras? Looking for advice for a short window...
Love the site!

San G would be a little tight on 12 hrs. Maybe Baldy NF via the chair lift? Baden-Powell if there's still snow? San J next time we have a winter? :)

With global warming one never knows what will transpire for skiing. It is now quite normal for Lake Tahoe (6,200' at lake level) to receive rain in mid-winter. Doesn't bode well.