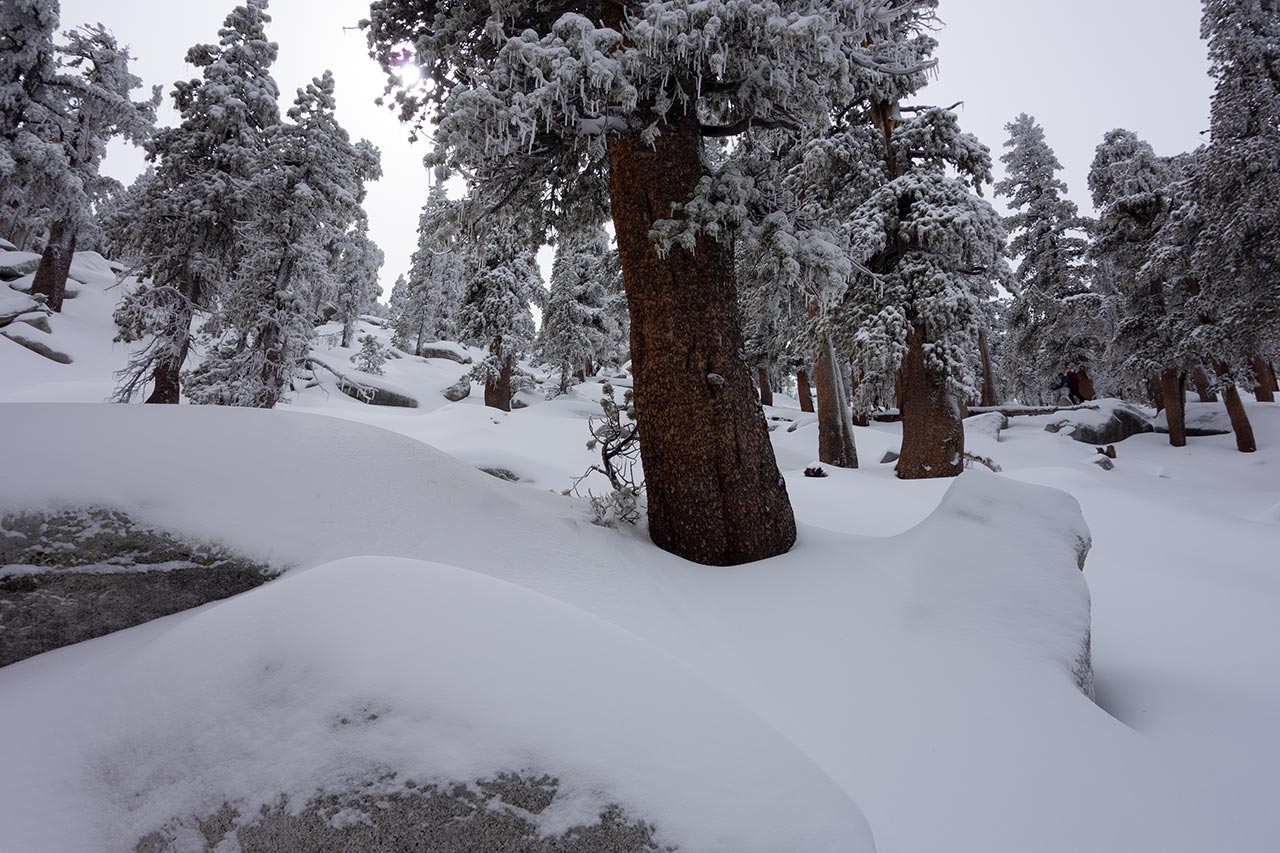 As I wrote awhile back, you can use the SoCal ski resort webpages to get a pretty good idea as to what's happening in the higher backcountry elevations. Two of those key indicators are (1) is Mt. Baldy Ski Area open? and (2) is it raining at the top of the Palm Springs Tram? The mid-storm answers to these questions were not promising.

Still, there's no substitute for boots on the ground, so I buzzed up the tram Sunday a bit nervous, certainly, about what I'd find, but convinced there had to be enough snow up there somewhere to make for at least better-than-nothing skiing. Actual conditions just barely met that standard. Barely.

I think last week's Mega Wet must have come in with snow levels initially as high as 10.6K. Maybe even higher. That's the elevation where the trees finally became encased in ice. But...late Sunday morning, barely hours after the storm had cleared, tree trunks near the summit of San Jacinto were still damp, suggesting there was never a hard freeze even at 10,800'.

What did that mean for skiing? First, we found a little less than a foot of uber-thick wet snow at the ranger station. Normally I kick a lot of rocks skinning away from the Ranger house, even with more coverage, but this snow was so thick it just sealed over everything, making for an easy if sticky/gloppy skin through Round Valley.

But with that crazy-high snow level, snow depth never really built up, as it usually does, as we gained elevation. Snow coverage on San Jacinto's east face can only be called dismal; the gully due east of the peak possibly offered better coverage, but it was a jungle of nerve-wracking snags, clearly stretching the limits of the safely-skiable.

From the Summit of San Jacinto we caught glimpses of San Gorgonio, which suggested much better coverage on the upper slopes—maybe the upper 1K or so. What we found in the San Jacinto Wilderness does not inspire optimism for the lower San Gabriel range, though I'll hold out hope for Baldy until I get a first-hand report.

It felt good nonetheless to get out there and tromp around in some snow and push the gear and the legs on a solid SoCal day tour. I know I'm starting to sound like a broken record, but I miss skiing these mountains. With snow, they each offer something very, very special. I guess we can say there is now the makings of a decent base should more (colder!) storms yet come in March.

Bottom line: San Gorgonio may be doable in the higher reaches. If you do head there, watch as always for snowpack reactivity, and if you stay home, watch for future storms. Sometimes it's not easy being a Southern California skier.

Surprised & disappointed to hear things weren't better on San J. I did B-P yesterday and there had to be at least 2' higher up (hard to say because it was pretty stiff but I got a lot of pole in where I tried). It skied great from the top to about the 10th switchback, and from there the trail was skiable to the parking lot. A few people tried to ski the whole way down which was possible but not for long. It was clearly well above freezing on the bottom half. The top half of the mountain is good but I think you'll have to hike to get to it... Don't see the snow down low lasting that long.

I did Summit Sat/Sun/Mon,Sat was nearly epic, Sun was very busy but excellent early, and Mon was good before turning to spring conditions. SG looked really good (white vs. brown), but without much base it prolly won't last long. We need a follow-up storm.

Last year and the year before, while below or near average snow years, both yielded 3 good dumps each with up 24" a couple of years ago, the rest well over a foot. Been going here since '71 and I would have to say 9" of heavy wet might be a stretch for me to use the E word. To be sure it was fun, but most of the runs were groomed the night before and had a few inches of fresh with small pockets (don't get me started on that policy) on the sides left for the hounds. Chair 7 opened and was virtually untracked but 3-4 runs later the damage was done. Weekday type crowds was nice but with the bowls are still closed, never mind too thin of coverage for the off piste sections locals know about, and I was left wanting but still grateful for anything, particularly after the year we have had so far. Sounds like SJ was an nice trek, how was the downhill part? Surprised that BP was so good, the snow mistress is a fickle b.....ch, perhaps it was a little colder farther north as can sometimes happen.

Rained at the lower elevations of every Tahoe resort Wednesday night. Sigh ...