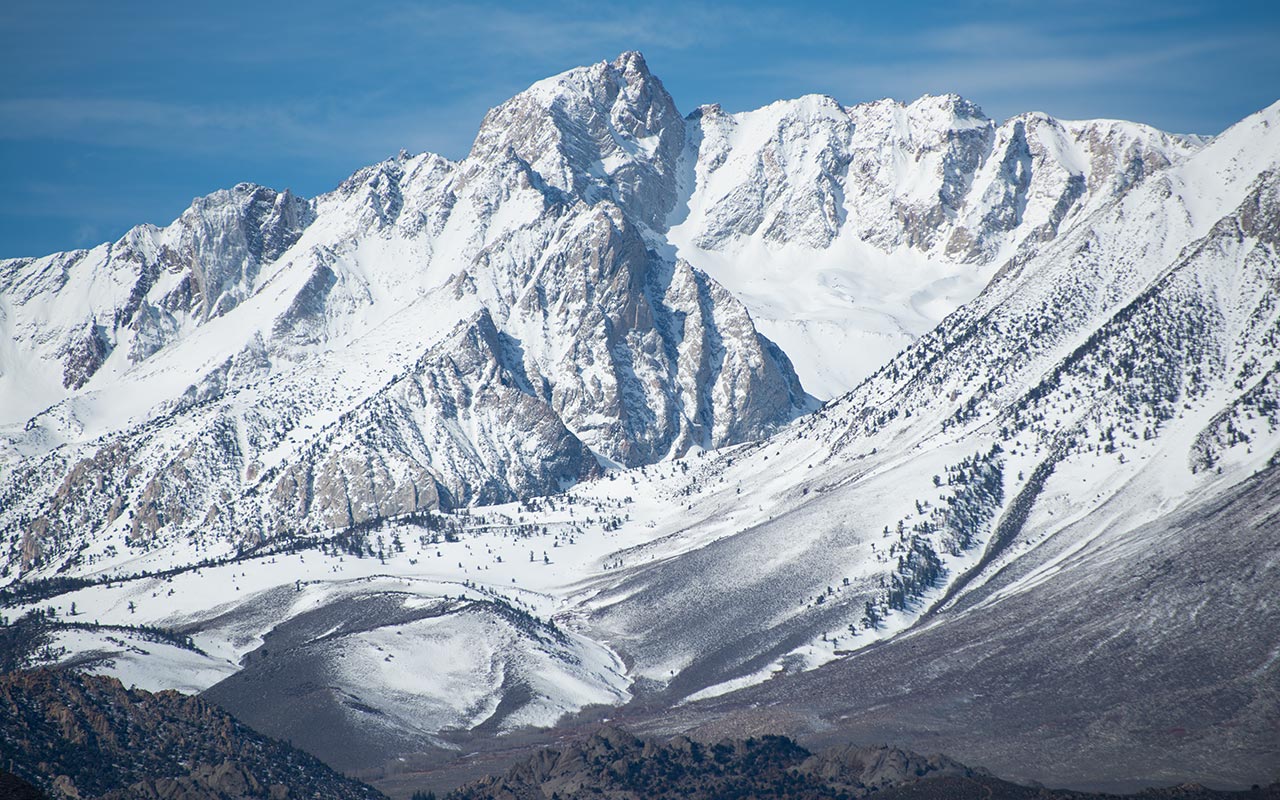 The long lens came out repeatedly as I drove up and down Highway 395 this past weekend. Some snow fell up there last week—you may not have heard. Sue calls it "The most powerful storm of the winter", and by this year's standards she's not lying. Depending on where you look, the Sierra high country saw anywhere from one to four feet of April No-Fooling snow.

Hmm...apparently I'm going to have to start writing about skiing, again. Thanks to the new snow, resort skiing at Mammoth was and is outstanding. Mammoth's somewhat precarious spring season now looks abundant and assured through the end of May. It was so good at Mammoth I completely forgot about Monday's website/pass renewal fiasco. Almost.

Tahoe skiers, thank you for all the photos of your cars completely buried beneath the snow. When I'm stuck at home in my tiny suburban-slum West L.A. apartment, nothing brightens my day like knowing somewhere out there, somehow, someone is killing it in the fresh. :)

As for the backcountry: I'm going to call this the Wildcard Winter. Who knows what you'll find out there? And the uncertainty doesn't just involve the snow conditions—I had to search my memory to find even one time thus far this season when I've put skins on skis. One time! Self-pitying laments aside, that means I'm just as much an unknown as well.

I was cataloging a number of big Eastern Sierra lines that looked maybe doable, and for each one, I found myself wondering if I'd even be able to make it up right now. Who knows? The snow might be there, but my conditioning level surely isn't. For everyone except Jed, the long tune-up of winter, steadily crunching increasing vertical totals every week, never happened.

Yes, the storm was wonderful, but it did not transform the Sierra into this (that's Big Pine, mid-May, 2006). Things do look tasty right now, as the shot of Mount Humphreys above suggests, but snow levels remain high throughout the Eastern Sierra, and what you see now may burn off quickly. As seems to be the rule now, you'll want road access to higher elevations, plus an opportunistic eye.

Lone Pine and the Whitney Zone seemed to catch a good piece of the storm. I'd consider a Portal tour if the road is open. Williamson and Bairs looked very doable, but I doubt I'd pass the fitness test. Basin Mountain's main couloir looked very good from afar; closer inspection via the long lens suggests thinness, but I'd wager there will be a good corn cycle on Basin and Mount Locke's Wahoo Gullies. Ritter as always looks terrific—from a distance.

Should we be worried about stability? In keeping with our Wild Card theme, I'd say yes. Not only are there goofy and unusual snow conditions to worry about, there is also a major warm-up in progress, plus our own desperation, fueled now by three full winters of record-setting drought. That is a dangerous recipe, no doubt.

For now, I say make good use of Mammoth, and poach those corn fields—carefully—as they develop...

Love that shot of Mt. Humphries. I grew up looking at that mountain. My folks live in the Buttermilks. Wish the season was better, but late season snow is better than none at all.