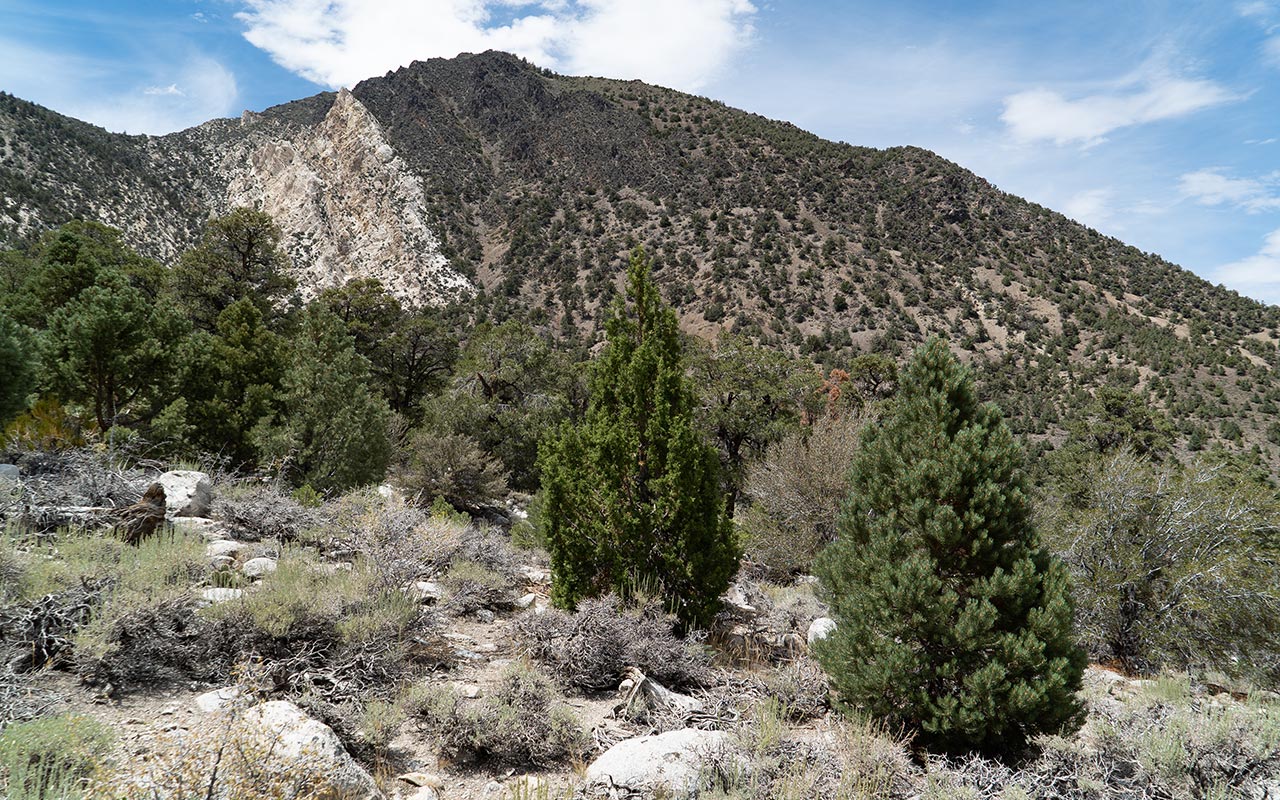 At first, I thought it was simply a case of guidebook error. Later—hours later—when I was beset by flies, and covered in scratches and pine sap, when my legs were doing the sewing-machine shake, when I saw the fresh cat tracks, when I knew I was going to run out of water—in Death Valley, of all places!—when I was long past the point of anything resembling fun and deep into this is stupid and starting to get scary...I realized something:

I was on the wrong f***ing mountain!

Or so I thought. I had to be on the wrong mountain, because no guidebook could possibly be so far mistaken in its description of what was supposed to be an easy trail hike to the summit of Squaw Peak and Waucoba Mountain, in the Inyo Mountains. It was impossible.

The swearing began almost immediately after I'd left the car.

Check that: I began swearing in the car, because my guidebook—Climbing California's Mountains, by Jay Anderson—had gotten the mileage wrong, adding extra unwanted middle-of-nowhere bone-jarring laps on Death Valley Road before I'd found (or had I?) the turnoff to the co-called "trailhead."

I'm not opposed to beatdowns—really, I'm not. They have their place. Some of my fondest hikes—the 'Andy Specials'—were misadventures that went horribly wrong in all the best ways.

But when you are expecting an easy and modest trail hike, and you get instead a merciless scramble up steep and extremely rugged ground with not only no trail but no evidence of a trail ever having existed, that's what I call a sandbag.

Anderson, where's my f***ing trail? I kept saying aloud, as the non-trail continued to fail to materialize.

Anderson's instructions appeared to be clear: ascend the gulley between Squaw Peak and Waucoba Mountain. But how could any sane guidebook author ever claim this endless, cliff-bound class 3 gully was—and I quote—"All on-trail"?

Is that a cat track? It sure looks fresh. I peered about the rugged canyon; I listened carefully. And then I swore a whole lot more.

Gaining the saddle above the gully entailed enough real climbing to convince me that no one could possibly be so deranged as to describe this as a 'trail' route—which meant I was climbing the wrong mountain.

I swore quite a lot more, then.

The summit—wherever I was—had nice views, but I really wasn't in the frame of mind to enjoy it. Downclimbing the gully, with its flies and invisible cats, didn't sound appealing, so I followed another gully toward the northeast, over very steep but more open ground.

The gully I was descending was filled with a curious river of pine cones. It went on and on and on. I found that by walking on the pinecones, it was a little easier to descend—not as grabby as the neighboring sharp rocks.

Still, going down seemed to take forever—why did it seem like I was much higher than the guidebook had indicated?

The answer, as incredible as it sounds: I did indeed climb Squaw Peak. Anderson's book understates the vertical gain by one thousand feet. It completely misrepresents the character, difficulty, and danger of the route. Persons interested in hiking and climbing in the Inyo Mountains should be aware that this is a profoundly remote and rugged area.

Beautiful—yes, but also hot and unforgiving. If you or your car break down here, things can devolve very quickly into a life-threatening situation. Carry extra water, in your car and on your person! Go to extra lengths to be sure you are where you think you are—and make sure others have a detailed itinerary and a check-in time.

I'm just aghast that this hike is given such cavalier treatment in what is otherwise an enjoyably quirky book of California peaks. I haven't been able to find a mailing address for the author to send him suggested revisions (or a bag of poop), so be advised that in my expert opinion, Anderson was on crack when he wrote the Squaw/Waucoba section.

As for me, I think I'll try to avoid doing any more solo work in the desert peaks—though after this post, no doubt it will be even harder to convince any of my friends to join me... :)

The Auto Club investigation has been closed (re: Mount Diablo report) and your status as a mountaineer has been reinstated. Holy cr...p, where did you find this stinker? How high, how hot, how many hours and miles. BTW I understand the Sierras are nice this time of year. I double peaked today on local training hikes, a meager 2100' (4300 weekend tot) and was glad the truck was never more than a couple of miles away in low (er) risk Santa Monica Mountains. What? it was kinda hot (86) and humid, and the pack had extra balast . Having spent time working in high desert temps I know it can turn from uncomfortable to deadly pretty quick. Yay (?) beat downs!

The track was indeed a cat, and looks bobcat sized to me. No erosion of the pad details, so could have been very fresh. However, given the extraordinarily dry climate of that range (emphasized by 3 extreme drought years), the track could have been quite old.

In my years growing up in Bishop I avoided the Inyo's completely. Even in the wetter years, it's dry creek beds, pinion pines and scrub brush, and very harsh unforgiving territory. Also, the views of the Sierra are spectacular, but the dry and harsh territory to get there? I'd rather have a close-up view of a peak from the pristine lake at its base (with a fishing line landing a beautiful fish).

I've done a lot of hiking in the bristlecones and climbed White Mountain, hence how I know about the views and the terrain, but other areas of the Inyos should be explored by 4WD vehicle. Racing rock playa, for instance, looks like a fascinating trip, but I'm driving.

Well, I seem to have a Death Valley bee in my bonnet right now, so...pray for me. Squaw is 10,358'. Parked car at 7K. Starting temp lovely 90deg F. Probably only 6mi round trip if that--very steep ground. Trail would make this very doable. W/o trail this mountain ought to be outlawed. :) Took me six hours!

Andy, I truly admire both your willpower and your persistence. On many of your trip reports, I say to myself while reading, "I would have given up long ago." You just keep on trucking until success. Bravo!!!

If you do visit Racing Rock Playa, I'll be very interested in seeing the pictures.

Amen Dan. Andy's TR's are educational and inspiring, they've helped reawakened my adventure lust as a senior (63 this month). The TR suffer fests inspire and admonish in the same breath. They examine with great candor what we all feel even on our relatively tame adventures and how to fully prepare. I'm strolling up Baldy in a couple of weekends with San G later. While I was training Sunday my internal whining evaporated when I thought about Andy's 9k on Williamson, so the second 1k peak was put in perspective. Yeah it hurt a little, it was hot and muggy, my pack load exceeded what I will actually needed but I had a greater purpose. If a suffer fest results or a rescue presents (less likely for me now)) on any of my trips, the physical and mental training will serve. Andy's stats on this one were way uglier than mine so again more perspective on what's possible and what's recommended (or not). Moreover his insights on logistics and an internal dialog allows the reader to walk in his shoes. Like DC said, keep 'em coming!

"Where's the money Lebowski...." I mean where's the trail.

I passed on trying to summit when I realized the trail was... Well a desert peak bagger's trail meaning the the route with the least resistance. I guess. If I had more time, water and different clothes I would have been happy to explore it. But I had only a single liter of water only enough for for the easy hike on trail to the summit.

I did find lots of Ryolite and some really cool iridescent rock, even a few pieces growing crystals.


I went with GF: Li, Lynda and Menzo, hiking friends. Like you I was asking "Where's the money Lebowski? I mean where's the trail Lebowski?

Its a really cool area and great camping as well, not too many folks out here either. lots to explore. It would be nice to have better beta. But what can I say and like you love those long days, but not this time.