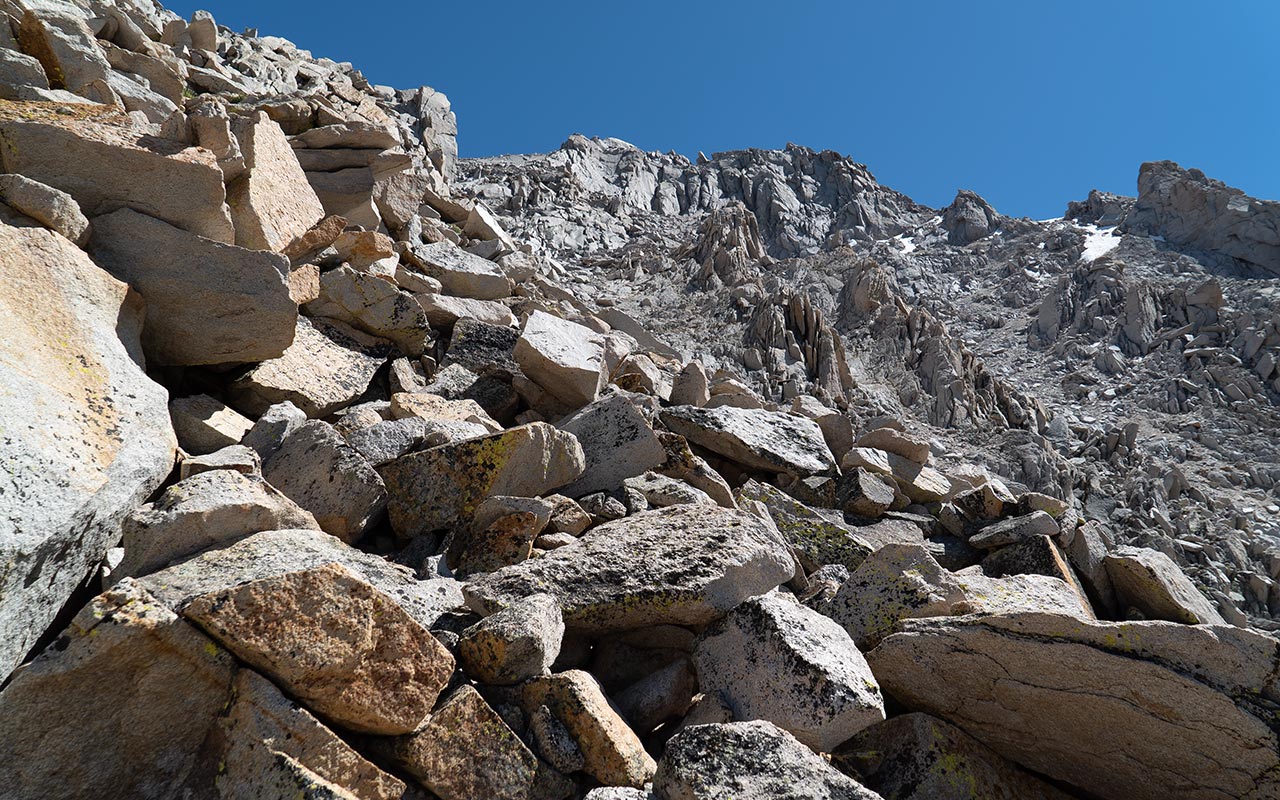 Insofar as I can tell, the Yosemite Decimal System, which is by far the most widely-used climbing route grading system in the United States, works extremely well provided you stay within the bounds of the Class 5 designation.

It is generally understood that climbs in the class 5.0-5.4 region involve trivial climbing, albeit fatally-exposed, and that fit individuals with little real rock climbing experience will probably manage to scrape by on say 5.5 and 5.6-rated climbs (provided they’re on a top rope!), and that those same fit and eager neophytes will begin to find themselves flummoxed by climbs in the 5.7-5.9 range, and thwarted entirely by climbs on or about 5.10 and higher.

To recap: for class 5 terrain, YDS works great, conveying well-standardized and useful information about what to expect. The problem, of course, is that same YDS is divided into four distinct categories below class 5, classes 1 through 4, also used ubiquitously to grade climbing routes in the U.S., but which suffer from two key deficiencies:

These are not minor liabilities. Take any of the first four grades, and you'll find wholesale disagreement on how to interpret them. Class 1 logically includes hiking on a well-established trail, but can include virtually any hiking, trail or not, where hands are "not required".

You may need to force your way through brush; you may get torn to shreds by thorns; you may get hopelessly lost; you may snap an ankle on talus—the rating says it’s all exactly the same as walking a jeep road across an open meadow.

Fine you say: let’s call that rougher, off-trail stuff class 2 (here, in the official version, hands may occasionally be needed for balance).

Despite that modest definition, class 2 routes can be fiendishly difficult. Steep, loose talus fields--like the east couloir on Mount Whitney’s Mountaineer’s Route--are usually designated class 2. Challenging, to be sure, but change that same ground to hard steep dirt, with sharp rocks sticking out, and you’ll find things suddenly get a lot more dangerous even though, strictly speaking, hands aren’t required at all.

A truly brutal class 2, like for example Waucoba Mountain’s east face, easily crushes many classic class 3 routes (like Mount Russell’s excellent east ridge) when it comes to the metric most climbers care most about: how likely am I get to hurt on this route?

That’s because class 3 is actually a climbing grade, not a measurement of risk. Class 3 is supposed to mean “hands are required”. In the most logical interpretation, class 3 has no fatal exposure potential (that’s what class 4 is for), and it should be the most trivial of trivial climbing: anyone who can climb a tree should waltz their way up any class 3 climbing.

Note that class 3 is meant to refer to the single most difficult portion of the entire route--one single spot. So if you are walking along a road, and you come to one and only one big step that forces you to use your hands to surmount it, that road is now a class 3 climbing route.

If this sounds a little vexing, the real punchline of class 3 climbing is that it often tends to be much, much harder than you expect. Class 3 climbing occurs in exactly the same steep, exposed, cliff-bound places where you find vast expanses of class 4 and class 5 climbing.

There may well be a class 3 passage through all that fatally-exposed rock, but if you don’t happen to find it, you’ll abruptly find yourself staring at deadly-serious technical climbing, with no way to proceed and, if you’re especially unlucky, no way to go back.

This very phenomenon has given rise to the derisive “Sierra Class 3” rating, which refers to the route graders’ tendency, in the Sierra, to call everything--and I mean everything--class 3 unless forced otherwise at gunpoint. Perhaps I exaggerate, but only just.

For every good argument in favor of the existence of the class 4 rating, there’s probably a better argument against it. Class 4 has the most zen-like definition: it occurs at exactly that moment where you ought to be using a rope, or perhaps find yourself wanting a rope, or perhaps refuse to go any further unless you’ve got a rope, which you don’t.

Class 4 might logically include exposed class 3 climbing, but really that’s well covered by the class 5.0 rating, isn’t it? Alternately, class 4 might be thought of as being modestly but still fatally exposed--say, taking place over heights of 30 to 60 feet--but that's like borrowing a rating from a completely different system and arbitrarily sticking it into the middle of the YDS.

Writing about the Yosemite Decimal System in his guidebook, High Sierra: Peaks, Passes, and Trails, RJ Secor notes, "The system is complex and illogical, and can be confusing to beginners and experts alike." (the entire passage is well worth reading)

Unfortunately, the YDS is now well locked in when it comes to use, flaws and all, and you’ll simply have to adjust to the idea that a YDS rating, excluding the class 5 category, cannot be used alone as a reliable means to set your expectations.

Can it be fixed? No, probably not. Still, for posterity's sake, let me leave you with my own (imperfect) recommendations for revising the scale:

Even though I don't have acces to The Sierra that some others do (Alabama), I can agree with you one hundred percent. In the few trips I've made out there in 20 years, I've never found the proverbial "easy class 3 chute which leads to the summit ridge."

I'm with ya! I've spent hours "hiking" through brush up talus or sand to cover only ~1 mile. I've also hiked up thousands of feet of reasonable "non-trail" scramble with much less effort.

In geology, there are two scales. There is the well known Richter scale (dude, that was a 5.0!). This is a measure of the raw energy released by the fault movement but doesn't measure area specific ground shaking. Then, there is the less well known Modified Mercalli Intensity Scale. This measures intensity of the actual physical shaking in any given area based on damage to different types of building materials. Two different measurements for two different purposes.

Perhaps the climbing community needs two different scales of difficulty. One that is a general measure of overall route difficulty or overall difficulty of an approach like Whitney's Mountaineer's Route (YDS), and another that is more specific to difficulty details of specific areas of a route. The Ebersbacher Ledges are a "XX" difficulty but the trail portion along Boy Scout Lakes is "AA".

I can't even begin to define such a new system, but clearly we've both been in desert sage that we consider to be much more deadly that an exposed 13er in the high country.

And how about those ski slope destinations? Me thinks the "Wall" at Snow Summit is slightly less sketching than oh say the other "Wall" at K-Wood. Never mind Drop Out at Mammoth which ski patrol lists at 47 deg, almost steep enough for Andy to substitute for his morning coffee. Maybe Summit should go to a double blue diamond designation. The operational definition would be: Advanced skiers don't bother to gape at the entrance, experts launch the entrance blind and select non intermediate occupied LZ's while airborne , and intermediates look like cats descending glass.

Our local hike training hill (Lady Face Mountain, Agoura , Ca ) is 1.2 miles with 1200' gain- similar grind to upper Manker Trail past the ski hut at Mt Baldy (next Sat 6 am for me + 2 or more?). Google says the rock pitch (80-100' vert) is as much as 70 degrees at points. I was trained to climb always maintaining 3 points of contact. Well it's steep enough on descent that I use the classic 5 point contact ( uh pants get dirty with this one). I want to call it a 3+ cause if you tripped you could easily star fish to the bottom. I refer you to the above blue diamond discussion for validity of my rating ( on rock I'm the descending glass guy).

Good discussion, I looked this up a few times and am still confused - the ASS designations ( Andy's Subjective System, what!?) makes perfect sense. Never been but the Ledges scare hell out of me, so aren't they like a 9?

How ironic that I use an earthquake analogy last night and then I get hit with one the next morning. We are close enough that the Napa quake woke us up. No problems for us, just weirded out by the coincidence.

Glad your ok Dan. I've read a few geology books myself. One fun fact is that the summit survey monument on Whitney says 14,496.811 ft , at least in 1977 it did when I was last there. I have know idea where they came up with the 14,494 or 5 you see in pretty any map you look at (never mind the 505 they saying now). Heck, its right there In brass, just add a 10.5 mile 6k vert stroll if your a curious cartographer. Speaking of curiously, at one time water flowed from Owens, before it was a valley, to the Central Valley , ballpark 4-6 million years ago. So back in the day it was a class 2 stroll to Tulare. What changed is some terrain adjustment and time. The last uplift was in the late 1800's ( Lone Pine epicenter as I recall) with 6-12' growth in the Sierra. As it turns out enough small lifts repeated often enough makes a mountain range, who knew. Were past due for another map change btw. And don't get me started on the hell fire that created Mammoth. So earthquakes and geologic catastrophes are a BC guys best friend , well as long as the shaking and pyroxlastic ejecta have settled down that is.