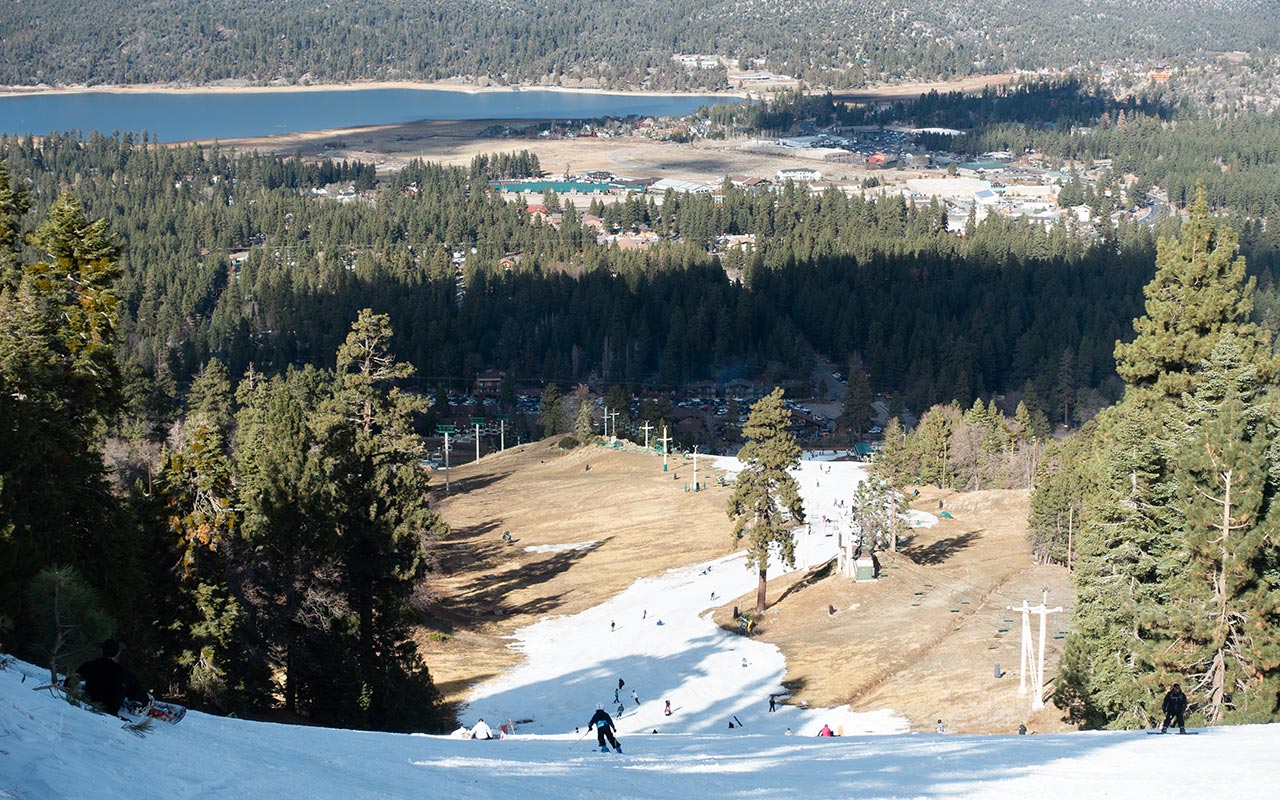 The good news is it's early December and there is skiing in Southern California. The bad news is last week's heavy rain did exactly what you'd expect to the local resorts' man-made snow: it hammered it. In the space of a week we've gone from pretty good inbounds skiing to disturbingly-familiar, just-barely-hanging-on ribbons of coverage.

Baldy remains closed, Mountain High has closed, and the runs at Snow Valley are currently offering mid-summer conditions. Bear Mountain and Snow Summit are still in play, if barely. I wonder, in dollar terms, how much money that rain event cost them? It's expensive to make snow; it's heartbreaking to watch one storm erode so much of it.

There is snow on San Gorgonio. Mount Baldy's summit remains bone-dry, suggesting the snow level from last week's storm was well above 10,000 feet. After peering at Gorgonio's north face from the top of Snow Summit, I'm going to guess you'll find 1-2 feet of snow above the 10.5K level—enough, perhaps, to ski...if you can get there.

Looking ahead, Ben says there's a good shot at a real winter storm for this coming weekend—hopefully this one will add to the snowpack rather than destroy it. Skiing Summit yesterday, I found myself contemplating how the SoCal resorts will cope with our changing planet. Some, obviously, are just going to close. I won't name names, but I think you can guess who the vulnerable ones are.

I suppose there's a chance some resorts will eventually move to higher ground. Sugarloaf Mountain, just east of Bear Mountain, offers a considerably higher summit. I have no idea why they didn't put the chairlifts there instead of Bear (or Summit) in the first place. Probably they wanted better lake views (and, in those days, winter was a very different creature—see photos in Summit's lodge).

Another option would seem to be some sort of retractable canopy cover. You'd pull it when it was snowing, and otherwise cover the runs to protect them from sun and rain. Currently snowmaking systems need freezing or near-freezing temperatures to operate. I expect technological advances will make it possible to create snow in ever-warmer temps: what you might call the "slurpee" future.

But the cost of printing snow will likely still be a limiting factor.

Canopies seem like a really obvious solution, but if you think about it they present a huge cost and logistical problem. Think about how much area we're talking about to cover even one run from top to bottom: figure a two mile run that is one hundred yards wide, and you're talking about 3.2 million square feet of canvas, plus steel poles and line to hold all of it up, plus the manpower needed to raise, lower, and maintain it.

Oh, and there's also the little problem that mountains tend to be windy places. Perhaps instead of a fully-opaque canvas, an open, UV and IR-blocking mesh could be used. That wouldn't be as vulnerable to wind, would be lighter and easier to maintain, and might even be less expensive. But still...

If I ran a SoCal resort I'd be thinking about dressing my hill first: removing rocks, and covering trouble spots (en route to total coverage) in AstroTurf or some similar synthetic surface so you could run on ever-smaller base totals—even just a few inches.

It's a grim line of contemplation, for sure, but assuming we're not headed toward a period of SoCal glaciation this century, the choice for the local resorts will be either find a way to cope with change, or close. The good news for resorts like Summit and Bear is they have a lot of water (for now), and they're close to a massive customer base.

If they can demonstrate a viable way to maintain operations, they'll attract investor cash and have a shot at implementing innovative (and expensive!) adaptations. If not, they will perish.

Fear not, the old expression "if you don't like mountain weather, wait 5 minutes" still applies. True it's been a warm fall but Big Bear was colder than usual in November. Had this storm not been sub tropical we could have been hammered in a good way. Or at least off to a good man made start. California's wet years frequently start off with warm storms. The magic number in Los Angles proper is 57, as in degrees, which is generally a lock for resort level snow-we never came close this last storm. I never plan on skiing locally until mid December. It has opened as early as late October but even late November is more the exception than the rule. Sadly, bad timing hurt Summit. They are really hoping for a good season to make up for a hideous one last year. Then again Mammoth only had 94" in 76-77 around the time global cooling was the concern. And then there was the Mammoth mega season in 2011 right in the middle of the global warming (whoops climate change now). Not to mention that the arctic ice cap has doubled in the last few years. There's a reason California had 5 major water projects built last century, it's called Mother Nature and she is a fickle b... My sense is, wax up 'cause it's coming.

Hopefully it's cold enough this week to make snow at night, and fingers crossed that the weather on Friday/Saturday brings snow up high. Bear is aiming to open this Friday, Dec 12. I'll be patrolling at Bear both Saturday and Sunday; I'd like to try out my new Dynafit setup.

Andy, I'm always up for a backcountry day (Sat/Sun) on Gorgonio - would love to skin up with you sometime.

Ever try skiing this peak or have any beta on it? Besides San G, Pine is another objective this winter/spring.

Here in the Sac area we're bracing for what is supposed to be a major storm Wednesday. Tahoe is supposed to get hammered. Can't wait to head out and make some turns!

On warming, the small glaciers in the Sierra above my home town of Bishop, CA have all retreated in my lifetime. All are melting. Not sure where your data about arctic ice doubling came from, but every study I've read says precisely the opposite.

For example, this study done in the Yukon found 22% reduction in total glacier ice in the study ranges. It also found that when compared to other studies done in the world, only ice fields in Patagonia and Alaska are shrinking faster.

Exactly eight years ago, Dec, 2006, I looked up in the sky one afternoon here in suburban OC, CA and saw a jet aircraft overhead trailing a plume of smoke or condensation behind it. I had never seen anything like it before.(I'm 62) Thus began my journey towards enlightenment and the world of Geoengineering. Pay attention to the bright red sunsets and pink clouds lately. Watch as jet contrails crisscross the sky and morph into "high cirrus clouds" as Dallas Raines calls them. It's called Global Dimming or Solar Radiation Management and it's very real and here to stay. The Ivanpah Solar Facility in the Mojave has been seriously affected by "clouds and jet contrails". A 2 billion dollar facility? With loads of R&D and testing before construction?
There are active disinformation operations out there like Metabunk and Contrail Science. Don't be tricked by the "knaves who set traps for fools". Instead, listen to the thousands of independent observers who have and continue to file reports. Honest citizens who have nothing to gain and nothing to hide. But merely tell the truth.
Bill Gates/Intellectual Ventures, David Keith. Ken Caldeira are just a few advocates of climate engineering. Nobel laureate Paul Crutzen also supports geoengineering research.
And yes, the arctic sea ice has rebounded in the past few years, because of Solar Radiation Management and other engineering schemes. Melting of the ice caps cannot be allowed to happen, period.

Andy, I think your writing is top notch and look forward to your articles this season.

That big red and purple blob is spinning offshore, creating an epic day on the north shore of Oahu and is inbound with estimated arrival in socal in the next 24 hours. It's coming from the north, it's cold, mean and ready for bizness.

All this doomsday "resorts closing down," "tarps over runs," hopefully we will be posting smiley faces on this thread by Monday. ;)

It will be epic deep, keep your heads up!