At The Eleventh Hour, Snow 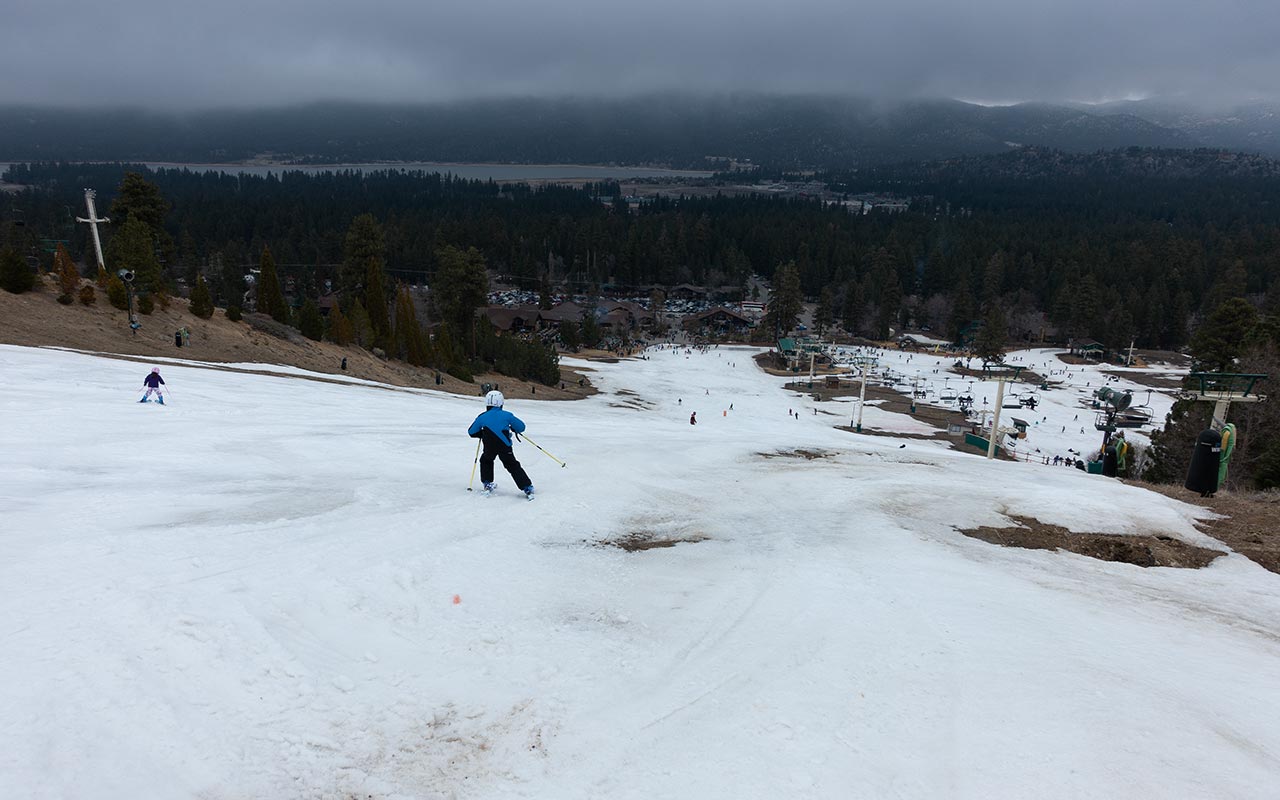 I was thinking, yesterday, about skinny runs. For those of you who skied in the 70's or 80's, I'm sure you remember them, because that's all there were: narrow, winding runs that ran through trees.

We skied a lot closer to trees in those days—and a lot slower. By the wide-open-highway standards of today, many of those old runs would look more like catwalks.

No, I wouldn't say I miss those skinny, choppy deathtraps, but I was contemplating their one advantage: they kept the sun off the snow. Might we see a return to skinny runs, I wonder? Maybe some sort of tree cover, or tree-like cover, might be a more viable solution to protecting today's endangered snowpacks from sun and melt, as compared to the obviously effective but dubiously practical canopy covers I've speculated about in the past.

I'm also a big advocate of AstroTurf, as a ground treatment, to allow resorts to make do with thinner bases—and also (more speculatively) to insulate the snow from the ground, and perhaps eek out a longer season by increasing the snowpack's longevity in (our now frequent) above-freezing temperatures.

February 21, Snow Summit California: what happened? Summit has done an outstanding job fielding a decent skiing experience this winter, considering, but the past two (or more) weeks of warm weather has finally forced the inevitable confrontation with reality. Summit today looks worse now than many a closing day from seasons past.

This is the new SoCal skiing reality, I'm thinking: a two month season, January plus portions of December and February, as luck permits (or if you're Mountain High, Snow Valley, or Mount Baldy: not even that). Grim. Last Year Snow Summit closed in the middle of March (on better snow), which (then) seemed shockingly early.

But today—surprise—I get to report if not a full pardon, at least a stay of execution: 6-9" of snow for the Big Bear Resorts, with greater accumulations on the high peaks in the backcountry. I have also been religiously following Howard's prognostications, and the oracle is still, albeit with much hedging, proclaiming some sort of a March turnaround.

I don't need to tell you how much we need it. China Peak Mountain Resort's CEO, Tim Cohee, called this season, "the cruelest winter I've ever seen." One of many, I think. The defining feature of these past several drought winters has been that each, in its own way, has managed to surpass the insults of its predecessor.

That said, Summit did not close yesterday, as it might well have without fresh snow. And there's a solid chance of snow next weekend. Beyond that, Howard's ECMWF or PDO or AMO may yet shift its whimsy and send forth the deluge in March. Winter has been taken from us yet again, but there remains at least the hope of a decent Spring.

An old Indian fable describes our dilemma. Basically a group of blind men are trying to describe an elephant based upon the body part they feel. To one it's a snake, to one a tree trunk, to another a boulder, etc. If one based their knowledge of SoCal skiing solely on 2011, 1999, 82 (?) you would think we're in Tahoe-and the last few years in Joshua Tree. The difference between cycles and climate change is the time frame. We may be in a sucky cycle now but east coast is killing it, our trn will come. Usually skiers covet western snow not eastern ice, but not this year. Again NOAA reports this is a persistent La Niña ( b..tch), cyclical in nature which IS the normal.. So while this sucks but I don't think it's the new normal. LA is semi arid, the only reason we can squeeze 15 bazillion people in here is imported NorCal water made possible by our wise predecessors who already got the semi arid memo. Meantime I missed last weekend per foot issue but am booked next Saturday at Summit with Mammoth planned for March, April, May. Pray for snow!

Still hoping for a March miracle. Having taken my skis out for one turn this season since Tahoe has been so terrible.

Haven't, not having ... silly auto-correct.

Dan, I recommend having kids. You'll be motivated to take them skiing regardless of conditions. :)

Every year I think "it can't *possibly* be as bad as last year... To me the cruelest thing about this year was the December tease, where it looked like things were going pretty well. I skied Chair 3 on Baldy the day after New Year's and definitely found some rocks... but also some nice stashes. The more northerly aspects were *that* close to having good coverage, and the weather had been cold for a couple weeks.

There are two very old (pre-WWII) ski areas in New Hampshire, Cranmore and Black Mountain, that largely have stayed in business by keeping a majority of the trails narrow and shaded. In Northeast US lingo what we now call the big wide trails used to be referred to as "slopes" and "trails" were always narrow and considered a sort of adventure. Kandahar or Artist Falls at Cranmore and Big Dipper at Black Mountain are great examples of old New England trails that are fairly slender and retain their charm. Then there is also the famous CCC Thunderbolt trail in Massachusetts but I refer all comments on that to the commenter above me (Matt D).

I had the most incredible day of my life backcountry boarding monday morning in La county. Resorts suck the life out of skiing and make us compliant conformists.
I have video that I posted and boarders in famous powder resorts are like "wooh, where the heck is that?"

Truth be told as posted above, narrow paths, canyons and mucho trees are the only option.... in my view. Which is a legal nightmare.

I've skied all over the world. I love LA.

If they need a chair, send em to Disneyland! Hee-hee.

I'm still smiling, where were you Monday morn?

Aw man, the Thunderbolt... a ski trail so well designed w/ regard to aspect that it's often skiable into early April on a natural Massachusetts snowpack. (This year's freakish weather notwithstanding, MA's snowpack usually gets wrecked by periodic thaws.)

TBH, I don't think the SoCal resorts are doomed yet. They're just going to have to change their mindset and act like Mid-Atlantic ski resorts: make snow like bananas every chance you get, and don't count on getting any help from nature.

Re the SoCal resorts, a huge technology leap would be the ability to (affordably) make snow in warmer/more humid weather. Even a few degrees warmer would be huge.

This doesn't seem impossible to me. Maybe some kind of (eco-friendly) additive that tweaks the freezing point; maybe some kind of cheap dehumidifier that pre-treats the air before it gets blasted out the nozzle. Or maybe old-fashioned tech: if they can compress the air efficiently, you can decompress it after bleeding off the extra heat (easy, in the mountains) and you've suddenly got a much colder air blast.

The BB resorts have proved that skiing on 100% man-made snow is a viable business model (with 15 million potential customers nearby), provided your customers know (1) you can do it and (2) you're committed to doing it...

Well, this last storm is getting stuck in La Valley at the moment, a few hours from dumping a foot more of snow once it starts to climb the hill! (Monday 11 am)

I don't see the future in a ski industry where you stand in a line for an hour to get one good run. I can think back on days waiting for a chair lift on an epic day that I could of spent the time walking up the hill in remote wilderness away from the spectacle of the resort. I can thank this website for helping me to see out of the box and back to nature.

I truly can't wait to snowboard on the lush empty drops of the Martian poles. Frozen dust, Martian powder, crystallized carbon and 1/3 the gravity? I'm in! It never melts, it could be a completely self sustaining ski resort, year round and yes, it has a business model of making more money than any resort in the history of man.

Except you can only board, no skis, lol. Just joking. I skied for thirty years so give me a break. Tomorrow morning will be the day we've been waiting for. Go get some.