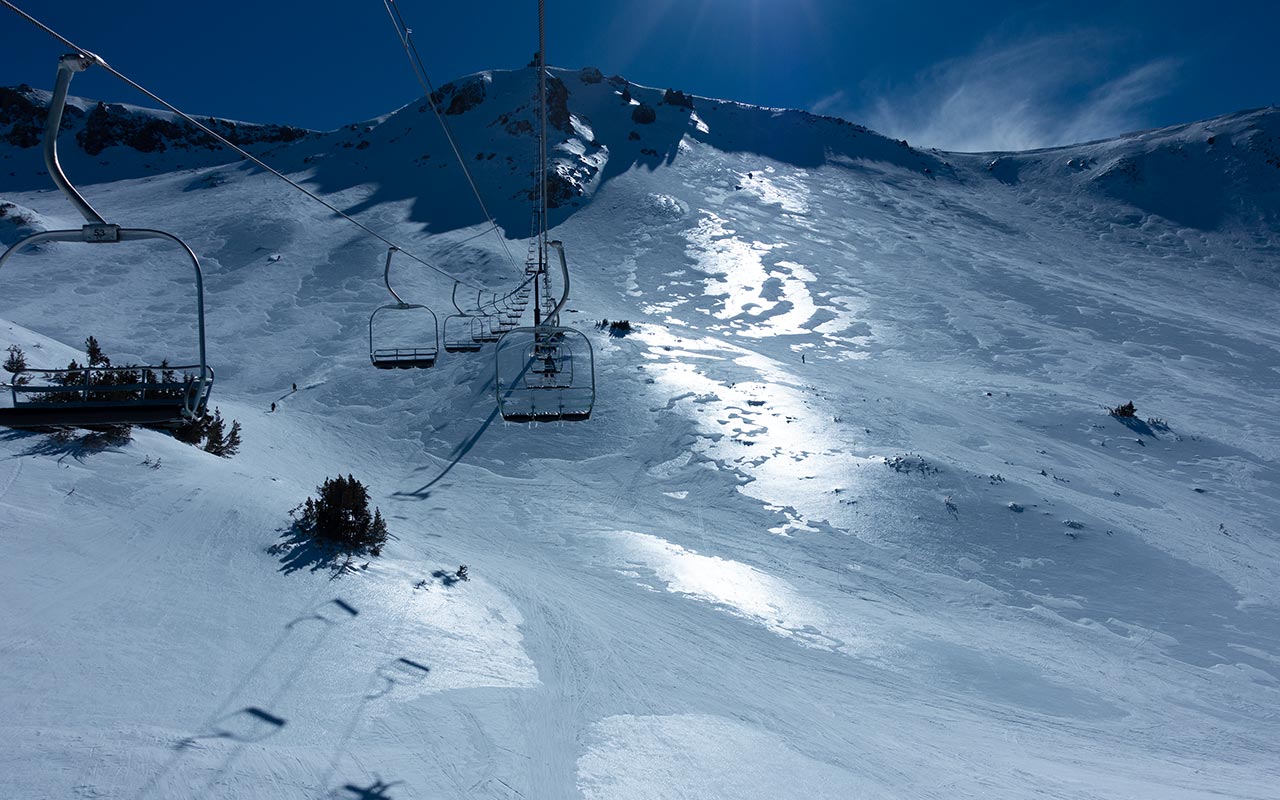 Yes, I'd heard Mammoth Mountain saw rain virtually from top to bottom over the past few days, but some things you just have to see with your own eyes to believe. Holy Mr. Freeze, Batman, that's a lot of ice! Mammoth looks like it's been speed-glaciated. Great gleaming sheets of ice are everywhere, along with the staccato scrape of screaming ski edges.

Thank goodness the storm finished up with a few inches of fresh snow. That plus wind drift has the mountain in a state of schizophrenic awesomeness. The groomers are in good (but VERY firm) shape, thanks to the cat crews, and the upper mountain features pathways of plush powder pillows surrounded by glazed ice. You get in the powder and you think this is pretty damn fantastic, and then you skitter across an ice patch and you suddenly age ten years.

I've never seen anything like it. Where it was good it was so good I couldn't quit today. When I finally wrapped up for the day I was just about ready to crawl after all the wild balance shifts and hyper-vigilance the snow demanded. But still: it was awesome. The most awesome awesomely-icy day I've ever skied.

Quick note on the backcountry here: there is a stupendous amount of ice out there. We will be talking about it and dealing with its impacts for the rest of this season, so just fix it in your mind right now if you're going to be touring in the Sierra: there is ice out there, it's everywhere, and it's going to be consequential.

I have had days like that. One moment you're enjoying glorious wind blown fluff, the next you're skittering along like a stone skipping across a lake. Bliss one moment, terror requiring a change of underpants the next.

Scary to think what could happen if it stays cold, storms roll in (please, oh please, please), bury the ice, thereby creating natures version of a Slip and Slide. Ive heard of slides ripping down to early season ice bases so unless a big warm up occurs, AKA as Southern California, seems like a scary potential. Wonder what your BC guide buddies are thinking about this? Kirkwood can get like this too, but it seems like a good storm makes it go away though one must tread lightly if the new snow is on the shallow side for the schizophrenic pow/ice skating experience.

Dan, one thing that is heartening is just how good the skiing is at Mammoth right now, despite everything, despite how rotten the season has been. If Mammoth can pull together in a year this bad, it sure gives me hope that Mammoth will be viable for a long time (unlike, say, the SoCal resorts, which are clearly teetering).

Brad, the slide risk comes in many flavors with ice, including wet slab danger late in the year, but I was thinking also of the fall risk that ice poses to skiers and mountaineers, esp. when it's partially hidden. I recall seeing ice patches on Cucamonga Peak once--they were almost invisible until you were right on top of them, and then watch out! I think USFS actually closed Ice House Canyon that year because hikers were getting killed sliding on ice.

Yikes, good points. Annoying at a resort , potentially deadly with exposure. I read an article about snow border Jeremy Jones finishing a spring run (Cham I think, "alpine start" time so early climb)) where the entire slope flushed a short while later. His comment "timing is everything in the mountains". Enjoy the new board research.

Searched memory banks and remembered this. Hit Mammoth like 20 years ago with the full ice cube effect. But found on the lee side of any ridge, tree line, rock line, etc the wind blown pow had accumulated to 4-6". It was like a frozen desert with drifting snow instead of sand. Conditions so bad for most with high winds and cold temps that the hill was quiet, leaving me with mountain of private sustainable stash. Bailed on Summit today due to cold (me not hill), so one more week of rehab then next Saturday booked with my son-can't wait.