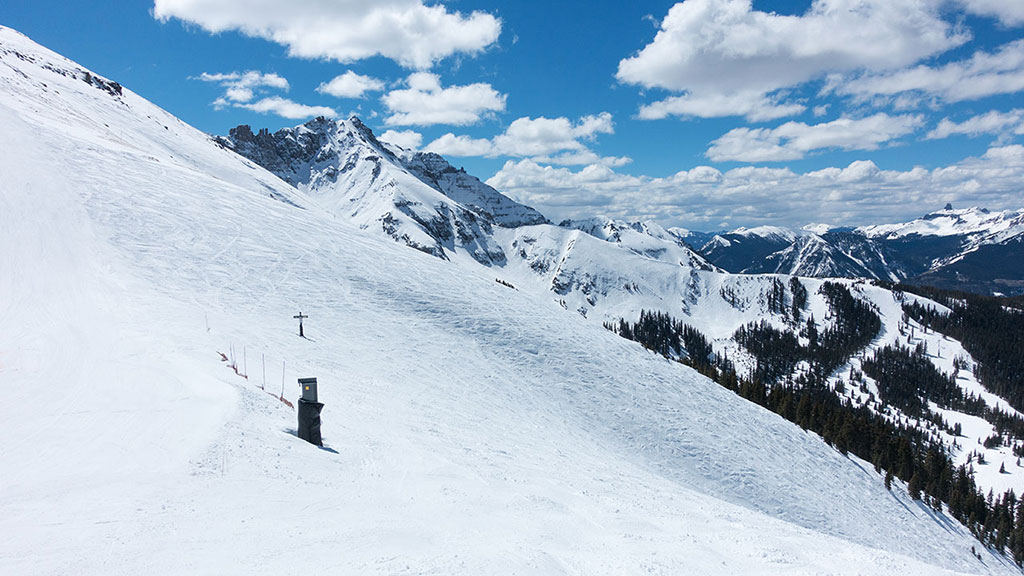 As is my annual custom, last week I traded Southern California for Colorado's San Juans, spending six days in the town of Telluride. And, as is also now a yearly tradition, complex thoughts swirl in my head as I try to reintegrate back here at home.

Surely there is no better way to induce a case of what-the-hell-am-I-doing-with-my-life than a March visit to Telluride.

But first, the snow: what a bittersweet joy it was to see lofty mountains actually covered in snow! I found myself comforted at once by the sight—here is what mountains in winter are supposed to look like. Memories of four dry California winters receded with remarkable alacrity as I eyed the magnificent snowy Sneffels crest from Ridgway.

Yet Telluride, too, has been dry this season. Much of this year's snow arrived only days before I did, in a series of storms that left over 60 inches; before that, the ski area was in a mode that is well-familiar to California resorts: just barely hanging on. Our timing thus was good with regard to snow, but we did get heat—temperatures in town (elevation 8970') reached near sixty degrees during my visit.

We watched the snowpack shrink daily, creating brown patches where previously there was only white, and the melt accelerated later in the week, when it rained across the mountain. So, while I did enjoy a brief vacation from California's drought, there were more than enough overtones to remind me that Telluride, too, is experiencing the winds of change.

Even so: there are few places on Earth that feel so vibrantly Real as Telluride. When I catch that first glimpse of the valley, and town nestled below, it's as if I'm awakening—as if everything else is but a dream. I know of no other ski area where I find myself so continuously stopping, and just gawking, astonished, at the sheer sight of the place.

And yet the realness of Telluride exists in dire contrast with the unreality of the town's economics. It's probably best, if you want to settle here, to have a spare billion or so. Check that: $20 million would probably be enough. Maybe ten, if you can live on a strict budget. Telluride is thus both the pinnacle of why so many of us live to ski, and a place where it is virtually impossible to ski to live.

So what, I say? Give me the 9am gondola ride on a warm sunny day. Give me first tracks on Milk Run. Give me the San Juan backcountry, treacherous though it may be; give me my week in the Garden of Eden, give me perfection, and I'll hardly complain when you kick me out at the end of it. I'll go back to the slumber of my regular life, counting the days 'till next year, when I'll wake once again...

One of my "must go" destinations.

Was in Vail a couple of weeks ago for a "work" trip. Same thing, beautiful snow, cool air until it got warm. But you know? It's not the Sierras, it's not our home. Pray for a better 2015/16 season!

very well put... I too have a soul stirring fondness for CO.

Had a number of cool CO trips, closest to Telluride was Durango (AKA Purgatory). Just returned from Mammoth after a 10 year hiatus. The off road portions were not in play due to cool temps not allowing corn/frozen slush to soften. So a 95% groomer experience, not a bad thing for the recovering ankle. Damn that is a nice hill, heading back up in a couple. While there I went to a lecture on low tide Sierra BC skiing strategies by non other than Howie Schwartz of Sierra Mountain Guides. His impressive recon efforts (augmented by a fortunate flyover while returning from a trip) lead to the determination that the western slope of the crest above 12k is still on depending upon aspect and temps. Access will take effort and promptness for those interested. He said he has developed some meteorological prowess as a guide and explained in detail that the extreme low snow fall totals are attributable to the persistent high pressure systems over much of the west for the last 4 years. Pray next year (month??!!)this pattern changes.