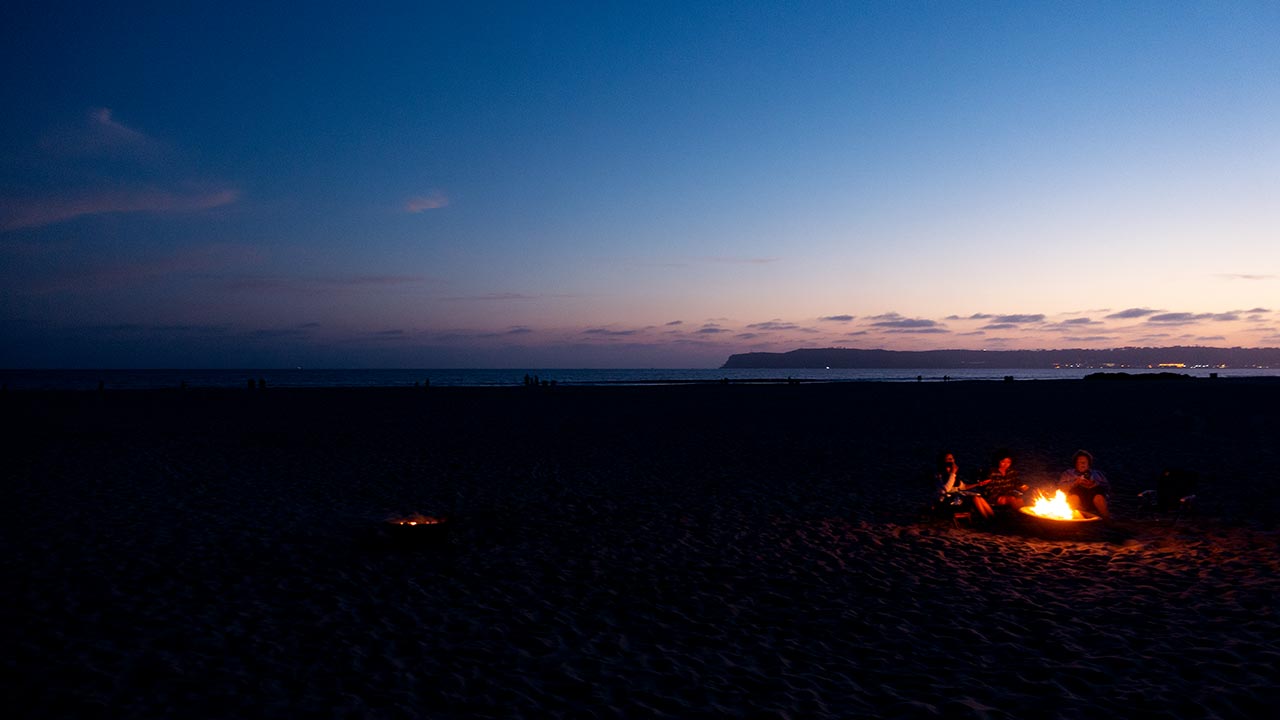 Here's sunset on Coronado Island, just off San Diego. Having spent the past weekend wandering about, I have the say the place is very impressive—almost as nice as Santa Monica. :)

I have not been hiking. Throughout this past winter I was contending with a nagging back issue. When the snow melted, so did my willingness to do pretty much anything other than stay in bed, which created its own set of problems.

One of the things I struggle with in creating SierraDescents is knowing what, exactly, to write about. Clearly anything skiing, climbing, or Sierra related is in-bounds, but a lot of the stuff I find interesting or just think about a lot falls well outside those categories, leaving me torn between wanting to talk about it, and not wanting to overshare.

What have I been doing here in my convalescence? Reading. A lot. I went through 'A Canticle for Leibowitz,' which is outstanding if you like post-apocalypse Sci-fi, and then Joseph Heath's 'Enlightment 2.0,' which I thought has the best explanation I've yet seen for why the modern world (and the 'net in particular) seems so hostile to rationality.

Currently I'm reading Tyler Cowen's 'Average is Over,' which is a sobering but also optimistic look at who is going to thrive in the robots-and-stagnation era (hint: it's supposed to be me, but I sure don't feel like a New Economy winner). Incidentally, if you're interested in economics, and you don't follow Cowen's blog, you are doing yourself a grave disservice. Yes, he's Libertarian, but reading contrary opinion is good for you.

I'm also reading The Antidote: Happiness For People Who Can't Stand Positive Thinking, which not only has an irresistible title, but is also proving to be much better at holding my attention than Cowen's book. There's a particularly striking section here on goal setting that directly references climbers and mountaineering.

So, about me: if you've had back pain, you know it generally entails a great deal of undignified suffering and then goes away after a suitable period of time. I've become a big believer in Robin McKenzie's exercises. Whether or not you have a healthy back, I'd recommend both his books, 'Treat Your Own Back' and 'Treat Your Own Neck' as quite possibly the closest thing you'll find to a miracle cure for treating and avoiding back pain.

I am always struck, as I contemplate my own challenges, that all of you out there have your own lives to worry about, your own nagging aches and pains, successes and setbacks, triumphs and tragedies. Some part of me thinks it would be awesome if we could all share everything with each other, and really keep in touch, but then I remember how much I dislike Facebook, which makes me think we need to focus on our real circles, not our virtual ones.

But I'll keep trying to beam out positive vibes nonetheless.

Hope you are all having an excellent summer thus far. I'm planning on getting out of bed here soon and returning to some good old fashioned hiking and climbing.

I can certainly commiserate with your back pain. Please accept my well wishes. Debilitating pain on our 20th wedding anniversary while cruising to Alaska was not on my itinerary.
Books - May I suggest "The Martian" by Andy Weir. Matt Damon is playing the lead in the big screen adaptation this fall.
Backpacking - It's been 35 years for me. Heading to RMNP in one month for a week of torture, wait, I mean enjoyment. Been training like a trooper so I don't die on trail.

Thanks Ken -- that looks interesting. Have a great trip!

Rehab seems to be a part and parcel of being an athlete. My December ankle 360 degree sprain (binding release issue) kept me off skis or trails for nearly 3 months. A favorite local 1200' gain in 1.2 miles hike/climb I frequent now takes 35 minutes, up 7 from last fall. Frustratingly slow but that route was not doable even 2 months ago-so pretty grateful overall. Can't tell you how many guys were telling me to give up, slow down, your too old, blah, blah. But Im already in good enough shape to plan for a 7-11 birthday (64th) stroll up Ski Hut trail to Baldy for the summer warm up. And back issues plagued me since I was 16. And don't get me started on the medical profession "cures". As an example, I received genius advise like back strength depends on stomach strength. Really, well I was tested at the 95 percentile for that so try again. I've learned and/or developed a number of techniques over the years for this- would like to compare notes with the recommended reading advise.
Suffice to say a I've figured out that a stretched and strong back is a healthy back for this senior citizen. Good luck with the recovery, enjoy the process and accompanying discovery of who you are and/or who you want to be during the process.

After I came in complaining of fairly serious back pain to my doctor, he reassured me that "if you exercise the pain will subside, and if you don't exercise the pain will also subside, and in either case, it will come back eventually." At least the co-pay was only $10. Please keep writing on whatever strikes you, Andy. I for one enjoy almost all of it, and I'm sure the therapeutic aspect of it makes you a better actual person, if not a better virtual one. Pray for snow.

I recently broke my neck in three places on a sandbar surfing and the doctor says it will only get worse not better so if i'm not feeling your pain, I think I will be sometime.

Your input on books, rationality and other topics that seem out of place are not, as like minded people will gravitate towards similar subjects. you could never over share on this site as people choose to come here to read your words. then, they have a second choice on whether they want to click it and read it. unlike me, who sprays stuff all over face book.

Anyways, fear, rationality, logic, irrationality are all deeply connected to the mind of a mountain backcountry wild-man.

Loss of rationality? I don't think I ever had it in the first place! Perhaps I'm misreading...

But the markets are behaving irrational along with everything else from Nature to government. Having the courage to make people think about these things is very important I would say and in the end makes us understand ourselves better in those split second moments when we are carving a path down the mountain.

stay strong brother! Follow the muse/inspiration and don't give a.....