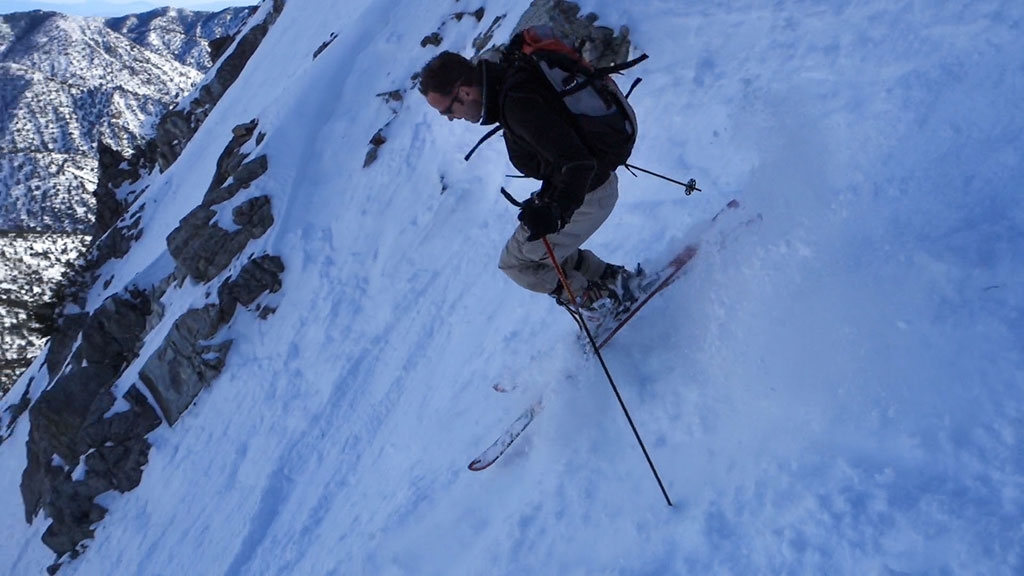 Back from a quick gear tuneup trip to MM, which means it's time once again to resume my never-ending quest to deconstruct steep skiing technique, 2016 edition.

In contrast to previous chapters in this ongoing saga, today's post revolves around my efforts to reduce the whole of steep skiing into one simple, pithy little mantra. I've played around previously with the notion of using upper body position—specifically anticipation down the hill—as a way to setup steep turns.

The problem has always been this puts your body in a precarious position, and if for some reason the turn fails, or you abort the turn, you risk tumbling down the mountain, which of course is not good. But yesterday, at Mammoth, I started playing around with anticipating ("leaning", for you philistines) not down the hill but rather across it.

This seemed to work really well, obviating the problem of the ski tails catching without creating undue balance issues prior to the turn.

But how to describe it? It feels like putting your hips in front of your toes. There is a sort of "hump" (don't take this too literally); on the backside of the hump, turns get sticky; on the frontside, turns get sweet.

"Hips Over Tips" might be a good slogan, but that's not logically viable—you can't put your hips in front of your ski tips, or at least, if you do, something has probably gone wrong in a catastrophic sort of way.

"Nose Over Toes" works, but you can have your nose in front of your toes while still having your hips (ie, center of mass) well back, negating the necessary effect.

Obviously there are all sorts of good, gonad-related words for parts in the hip region, male and female, but I can't seem to find any good word pairings here (Balls Over Falls?).

Anyhow, I'll keep working at it—the turn, of course. But I do think this hips-across-rather-than-just-down the hill setup might explain why some skiers seem to effortlessly turn on steep terrain without engaging in any of the nerdy mental gymnastics that I tend to resort to.