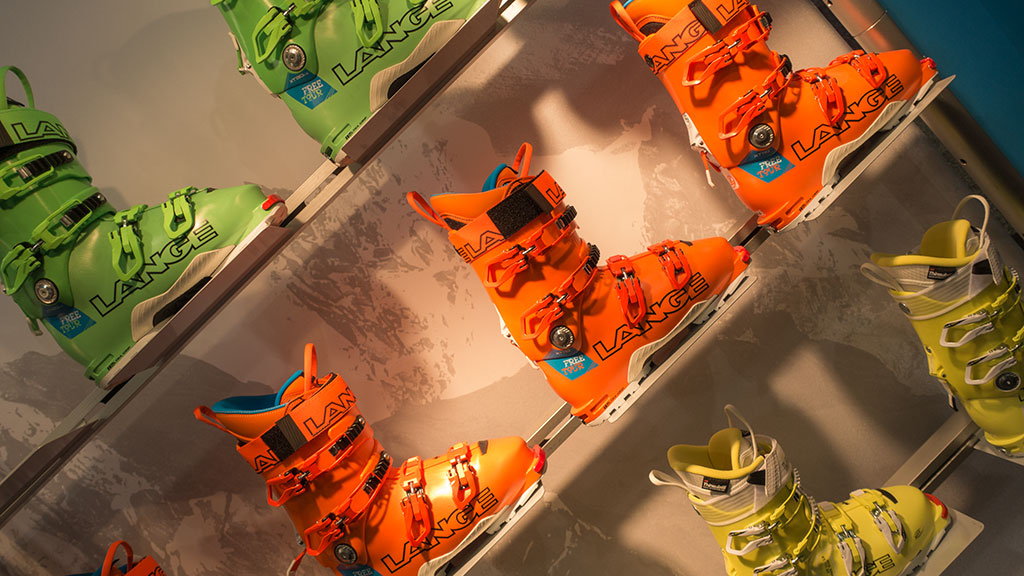 For Backcountry folks, we have some auspicious boot news from this year's SIA Snow Show: two very interesting new tech-compatible touring models from Tecnica and Lange.

The Lange XT Free Tour debuts Fall 2016 and features Dynafit-licensed tech inserts. As many of you know I am a true Lange afficianado, and therefore it greatly pains me to have to say I didn't ski the XT.

Lange had these in Mondo 26.5 at the Copper demo, but the shells were huge on me—so much so I didn't see any point in trying to ride them. Now, normally I'm dead-on for a 26.5 Alpine boot, and tight for a 26.5 tourer, so something's gone funny here with the sizing. More on that in just a bit.

Feature-wise, the XT Free Tour has a Grilamid shell, Ultralon liner, and Lange's 2.0-version Power V-Lock walk mode switch (from the XT series). Spec calls for 8lbs/pair (26.5), so we're still in the sidecountry range, but this is the lightest walk-mode boot Lange has yet built.

Sizing issues aside, I did try the boot's walk mode, and found it OK but not spectacular. I don't think I can fairly give you any other feedback at this time. Stay tuned. The Free Tour is obviously a big deal, and I'll do my best to get more time with it.

Tecnica has rebooted (sorry) the Cochise series, making dramatic fit improvements, and making the Cochise lighter while simultaneously using a PE/PU shell (which can be easily modified by your bootfitter).

Cool, but clearly the bigger news is the debut of the all-new Zero G Pro Guide, a bonafide (sorry, again) Tecnica touring boot.

Like the XT Free Tour, the Zero G Pro gives us tech inserts, and debuts Fall 2016, but unlike the XT, it weights a far more competitive 7lbs/pair (26.5) and it appears to have an excellent walk mode.

I say appears because I didn't spend all day climbing in it, but I did spend a lot of time skiing it, and you can watch my thoughts on it here.

Let's also talk about Salmon's MTN Lab boot: again, tech inserts, and a light shell that comes in at 7lbs/pair (26.5). This is a two-buckle boot, and it skis very nicely. My quick take: flat boot board wonderful, liner terrible, walk mode terrible, and shell shape bizarre, somehow both too narrow and too big at the same time. But it does ski very nicely, and it weighs 7lbs, so there you go.

Scarpa returns the Maestrale RS with minor improvements (walk mode switch durability enhancements), and gives us the F1 EVO without the Tronic/automatic mode (Europeans will get the F1 in its original, Tronic version, but fixed). Scott returns the Cosmos II, again with incremental improvements. La Sportiva debuts the Spectre 2.0. Dynafit did not show at the convention center.

What's up with Lange, Tecnica, and Salomon all releasing new-plastic (Grilamid, Pebax, etc) touring shells that seem so far off on the sizing chart? Two thoughts come to mind. First, these companies don't have the years of touring-boot liner experience that Dynafit, Scarpa, or Garmont (now Scott) have (had), so we should probably expect liner (and fit) issues.

Second, these new-plastic shells tend to be thinner, and though it seems ridiculous to suggest it, maybe the Big Three didn't compensate for the thinner shells when they did their last molds. I know, it sounds crazy. Whatever the cause: be sure you verify your sizing in person before buying.